Dmitry Medvedev: There must be no war in any case – SME.sk

The British minister will arrive in Russia.

MOSCOW. The process of negotiating security guarantees is the only way to resolve the current situation, said Dmitry Medvedev, Deputy Chairman of the Security Council of the Russian Federation. TASS news agency reported on Thursday.

“There must be no war, no one wants a war, and everything must be done to prevent any war. All the more so along the line of clashes between Russia and, say, the North Atlantic Alliance,” Medvedev told the Russian media.

There are people who make money raising tensions

He emphasized that, in relation to this issue, “it is clear that the most important and only option is to negotiate security guarantees, including by political and diplomatic means, to apply the principle of indivisibility of security, which is enshrined in all European and international background cannot be achieved at the expense of another country’s security “.

Medvedev added that the war scenario is terrible and that there are people who make money raising tensions.

More than a month ago, Moscow asked the United States and ONTO o Extensive security guarantees, including that the Alliance does not extend to Ukraine or other post-Soviet countries and that it does not accumulate its forces in Central and Eastern Europe.

The letter opens the door to negotiations

US Secretary of State Antony Blinken After the US delivered its written response to the draft security guarantees to the Russian Foreign Ministry on Wednesday, he said that the United States had not made any concessions to Russia’s main demands on Ukraine and NATO.

According to Blinken, the letter, which was drafted as part of a coordinated response between transatlantic allies and partners in response to the build-up of Russian troops at Ukraine’s borders, also addressed confidence-building measures in military exercises and maneuvers in Europe.

According to Blinken, the letter also opens the door to the progress of negotiations between NATO allies and Russia on arms control on the issue of strategic weapons and nuclear warheads located in Europe.

The head of American diplomacy added that he expects further negotiations with his Russian counterpart Sergei Lavrov in the coming days after the Russian side becomes acquainted with the content of the submitted document. According to Blinken, the USA is ready for dialogue and is on Russiawhich way he chooses.

There is a “developed partnership” between Russia and China

Russia’s and China’s strategic relations are helping to maintain an international balance of power. Dmitry Medvedev, deputy chairman of the Security Council of the Russian Federation, said on Thursday, the TASS agency reported.

“We have no military alliance with the People’s Republic of China and no one is striving for it,” Medvedev said. However, he recalled that the international community was constantly monitoring and engaging in relations between the two countries.

According to him, this means that these relations “have an impact on the balance of the international distribution of forces” and also affect the centers of power in international relations.

According to Medvedev, the absence of a military alliance does not preclude cooperation between the two countries in different areas, including the army and technology or the conduct of various exercises.

Medvedev expressed confidence that there was a “developed strategic partnership” between Russia and China that suited both countries.

The British minister will arrive in Russia

However, Wallace does not expect a breakthrough in the negotiations. He told the BBC that there was still a “chance” that the Russian invasion of Ukraine could be stopped, but he added, “I am not optimistic.”

TASS recalled that Wallace announced on January 17 that it had sent an invitation to Russian Defense Minister Shoigu to visit London. Wallace expressed his readiness to discuss issues related to mutual security concerns and to engage in meaningful dialogue in a spirit of goodwill.

On January 21, the Russian Ministry of Defense announced that Shoigu had invited Wallace to visit Moscow. According to the Shoigu Ministry, he “assured his British colleague that he was ready to discuss all urgent security issues, and suggested holding talks based on the principles of reciprocity in Moscow whenever it suits the British Minister of Defense.”

Canada is increasing the number of troops

According to AP Trudeau, he also said that he had ordered the army to deploy another 60 soldiers to the mission, who would join their 200 colleagues providing training to the Ukrainians. The Canadian government plans to increase the mission to 400.

“This is not a combat mission, this is a training mission. The Canadian military will advise and assist there. We will continue training. In the event of a Russian or Ukrainian invasion, we will ensure that the Canadian military remains safe,” Trudeau said. 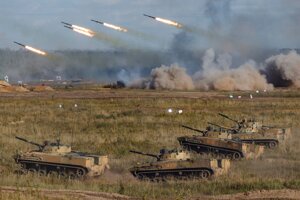 According to him, this mission also includes the provision of non-lethal equipment, the sharing of intelligence and support in the fight against cyber attacks.

The Canadian mission is designed to support Ukrainian forces so that the country can defend its sovereignty, security and territorial integrity, the Canadian prime minister said.

Trudeau added that Canadian Defense Minister Anita Anand will travel to Latvia and Ukraine in the coming days to visit Canadian troops.

Anand said Canada had trained more than 30,000 troops in Ukraine. More than 1.3 million people of Ukrainian descent live in Canada, the AP added.

NATO forces will be strengthened in Romania

Bucharest is negotiating with Washington and Paris on ways to increase the number of French and American troops in Romania. Romanian President Klaus Iohannis said this on Wednesday, Reuters reports.

“I keep saying that we are ready to allow NATO allies to increase their military presence on our territory,” Iohannis said. He added that “Romania is in contact with both allies in order to create concrete ways to achieve this”.

Iohannis’s words came after a meeting of the Romanian Supreme Council for National Security (CSAT), which dealt with security issues in connection with the accumulation of Russian troops at the Ukrainian border.

According to the Romanian president, diplomatic talks are the key to de-escalating tensions. He added that CSAT on Wednesday assessed the potential impact of the conflict on businesses and the energy and banking sectors. The topic was also the possible influx of refugees from Ukraine, with which Romania shares a 600-kilometer border.

According to Reuters, there is a NATO multinational force of almost 4,000 troops in Romania. However, the US has in Romania and Bulgaria their forces also located on separate bases.

“The current crisis once again proves that consolidating the Allied presence on the Eastern Wing, including our country, is very important,” Iohannis concluded.

Previous article2021 is the most anti-Semitic decade
Next articleAbsolute record: The Czech Republic has crossed a crazy line in the number of newly infected! – NEW TIME

Two 17-year-old teenagers drowned on Saturday off the beaches of Narbonne the day after a warning from the Aude...

Two 17-year-old teenagers drowned on Saturday off the beaches...
World

Russia will "study" the possibility of exchanging fighters from...
World

This Saturday evening, on the occasion of the grand...