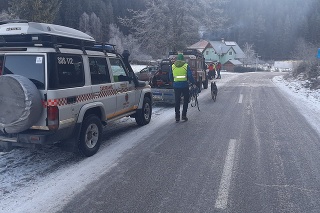 The search for a 58-year-old Polish tourist who did not return from a hike in the Western Tatras is still unsuccessful. Mountain rescuers reported this on their website.

“In Jamnícká dolina, they found a backpack that, after being checked by family members, belongs to the wanted person. Twenty rescuers of the Mountain Rescue Service (HZS) with five dogs searched the entire area, gutters, adjacent ridges and saddles. The wanted person has not yet been found, “informs HZS.

HZS launched a search for Poliak on Thursday (January 13). The previous morning, he had gone from Zakopane to climb the border ridge area. According to the investigation, he could move in the Western Tatras in the part from Volovec towards Bystrá.

The rescue operation was attended by rescuers of the Regional Fire and Rescue Center of the Western Tatras, the Avalanche Prevention Center, the training center, the Fire and Rescue Service Directorate and one volunteer HZS rescuer. The search on Thursday was hampered by extremely bad conditions – strong winds, freezing rain, poor visibility and icy terrain. Polish rescuers searched by helicopter, drone and ground on the Polish side of the Tatras. Also unsuccessful.