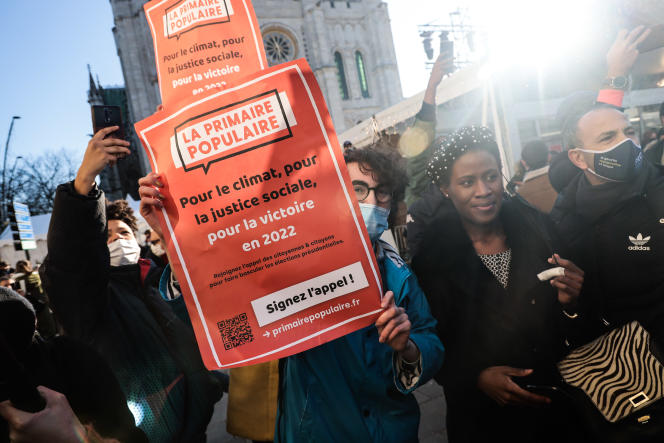 The deadline for the popular Primary draws near. While this citizens’ initiative online vote to designate a single left-wing candidate for the presidential election will take place from January 27 to 30, the movement’s organizers communicated on Saturday January 15 the final list of the seven candidates whose names will be submitted. majority judgment of registered voters. They are the environmental activist Anna Agueb-Porterie, the socialist candidate Anne Hidalgo, the environmental candidate Yannick Jadot, the MEP and environmental activist Pierre Larrouturou, the health expert Charlotte Marchandise, the “rebellious” candidate Jean-Luc Mélenchon and the former Keeper of the Seals Christiane Taubira.

The latter officially declared her candidacy three hours earlier from Lyon. The founders of the Popular Primary, Mathilde Imer and Samuel Grzybowski, gave a press conference in Paris, Saturday at 2 p.m., to reveal the list of successful candidates. Among the four main candidates selected, Mme Taubira is the only one to have announced that she would comply with “Popular Primary Rules” and will recognize ” the result “. This means that she should only maintain her candidacy if she emerges as the winner. Yannick Jadot, Jean-Luc Mélenchon and Anne Hidalgo refuse to do so.

Read also Article reserved for our subscribers Presidential election 2022: the great lying poker of the left

One vote per mention: Majority Judgment

At the end of January, during this citizen’s ballot in a single round, left-wing voters will express themselves electronically according to the rules of majority judgment. Rather than choosing one suitor and excluding the others, they will therefore decide on each candidate by awarding them ” a mention ” in order to express their preferences, as explained by Chloé Ridel, founder of the MieuxVoter association, during the press briefing. The question they will be asked is: “To win ecology and social justice, these candidates are? » Voters will be able to complete the sentence by choosing a judgment from the following five statements: ” very good “, ” Good “, “good enough”, “passable”, ” insufficient “.

To be able to participate in the vote, registrations are still open until January 23rd. As of January 10, 120,000 voters had confirmed their registration by complying with identity verification, which involves the communication of their bank details, a telephone number and an e-mail address. A new registration report will be communicated on Monday 17 January.

Read also Article reserved for our subscribers Presidential election 2022: choosing your president by giving an opinion to each candidate, a democratic experience

The vote for the popular Primary will take place via the Neovote platform, which was used last September and December during the primary of the ecologists and the Les Républicains (LR) congress. In the first, about 122,000 people took part in the vote, and 139,000 LR activists took part in the online vote of their party’s congress.

The Popular Primary collective was founded in February 2021 by two activists from the community, Mathilde Imer and Samuel Grzybowski. The latter said on Saturday that the initiative had collected nearly 885,000 euros in donations since its launch, from 11,493 contributors. These donations allow the collective to pay for the voting platform but also to cover the movement’s communication costs and train volunteers.