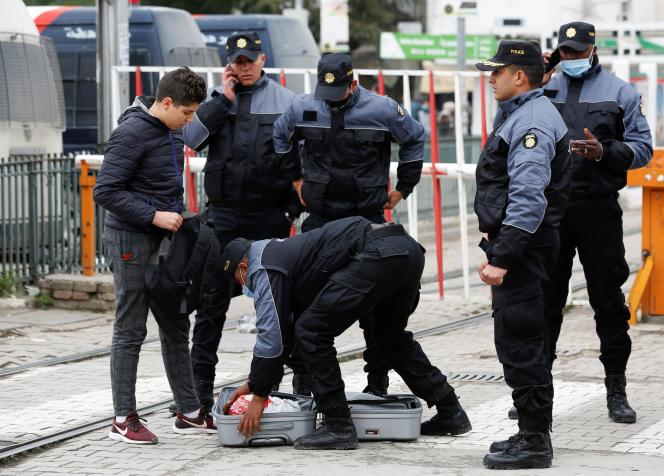 The daily correspondent Release in Tunisia was beaten up on Friday by Tunisian security forces. “While he was covering a demonstration against President Kaïs Saïed on Friday, our correspondent Mathieu Galtier was violently beaten by several police officers. The newspaper’s management strongly condemns this attack., reacted Release, on his site.

Demonstrations against the president were organized on Friday in the Tunisian capital, also marking the eleventh anniversary of the fall of Tunisian autocrat Zine El-Abidine Ben Ali. The gatherings, banned by the authorities, were brutally dispersed by the security forces, giving rise to scenes of violence rarely seen in the capital. “Mathieu Galtier was filming the muscular arrest of a demonstrator with his mobile phone when he was attacked by a uniformed policeman”, reports Release.

Hit “in every way”

The correspondent, quoted by the newspaper, explains that he immediately identified himself as a journalist in French and Arabic, while the policeman tried to take his phone. The journalist was then “lifted and dragged between two vans”. He recounts :

“They started hitting me all over the place, I was on the ground, curled up in a f position.œtale, I shouted that I was a journalist. One of them sprayed me with gas at close range. They kicked me. Eventually they took my phone, my press card and left me there. »

Once treated by the firefighters, the correspondent claims that his belongings were returned to him, with the exception of his phone’s memory card on which his images and videos were recorded. The journalist, who has been living in Tunisia for six years, has been prescribed “fifteen days of rest”. A doctor noted in particular “a scratch 10 centimeters in diameter on the forehead”.

The Association of Foreign Correspondents in North Africa (NAFCC) also condemns, in a statement, “the violence exerted by the security forces on the journalists who covered the mobilizations” in Tunis where was reached “a level of violence never seen since the creation of NAFCC in 2014”. “A photographer was notably clubbed and a video journalist hustled and prevented from filming”, adds the association, which requests the opening of an investigation ” without delay “.

In a press release published on Saturday, the National Union of Tunisian Journalists (SNJT) denounced “strongly barbaric violence” of the police against journalists who were on the ground on January 14. According to the SNJT, more than 20 police attacks have been recorded against journalists, “targeted while wearing their distinctive vests and asserting their journalistic character during the attack”.