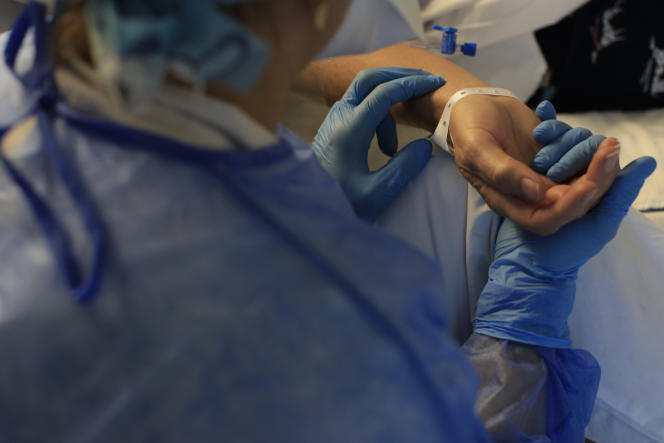 Will we soon see the end of the tunnel? the epidemiological report from Public Health France (SPF), Friday January 14, calls for cautious optimism. On the one hand, the country faced a “sharp increase in the circulation of SARS-CoV-2” on the week of January 3 to 9, indicates SPF. What’s more, new infections in France have reached record levels, compared to the rest of the world, according to the “Our World in Data” site, which aggregates international statistics on the pandemic. In addition, according to SPF, the majority of regions, in mainland France and overseas, have been faced with a “rise in new hospital and critical care admissions”. What “significantly increases the tension on hospital care”.

But on the other hand, in certain regions, a beginning of a decline, in new contaminations, seems to be taking shape – a hope to be confirmed. In addition, “ the new variant, Omicron, is less severe than its predecessor, the Delta variant, on the criterion of conventional hospitalizations. Except, however, in those over 80, if we are to believe the data of the Directorate of Research, Studies, Evaluation and Statistics [Drees], notes Mahmoud Zureik, professor of epidemiology and public health at the University of Versailles Saint-Quentin-en-Yvelines. Even better, Omicron is far less severe than Delta when it comes to critical care hospitalizations. » To these reassuring data are added the encouraging testimonies of two managers of the flagships of the hospitals of Paris and Marseille, the AP-HP and the AP-HM. What, in short, legitimize the portrait of Omicron, Janus with the double face: “Much more contagious, much less dangerous. »

In one week “nearly one in five people” tested positive

Read also Article reserved for our subscribers Covid-19: the spread of Omicron in France disrupts the screening strategy

You have 72.34% of this article left to read. The following is for subscribers only.