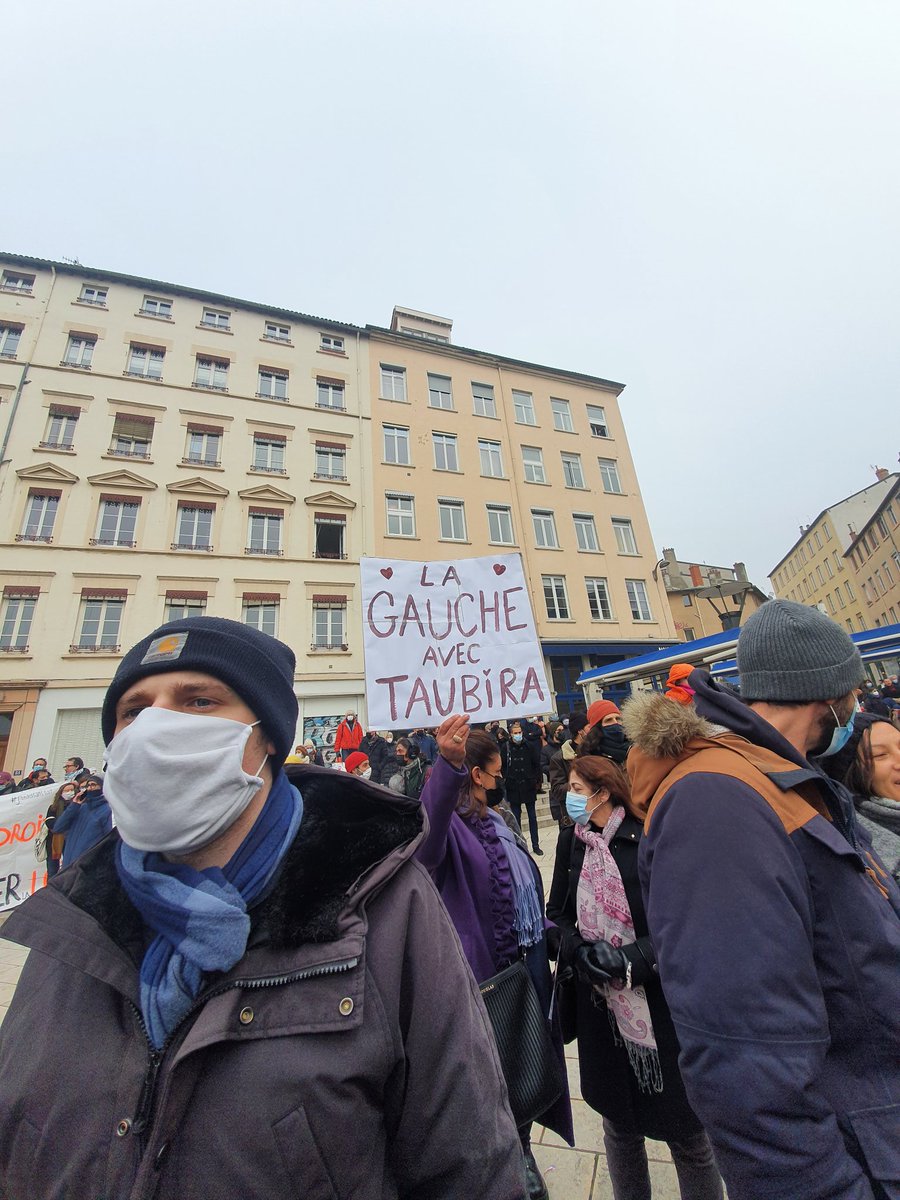 Find here all of our live #PRESIDENTIELLE

12:23 p.m. : Hello @Simvendee. Yes, this point has not changed. The former Minister of Justice always undertakes to respect the choice of participants in the popular primary. But pending the verdict of this primary, it is the eighth candidacy on the left. The division denounced by all the candidates has never been so strong.

12:23 p.m. : Christiane Taubira officially candidate, but will she still go through the citizen primary?

12:20 p.m. : Eric Zemmour provoked a controversy after his remarks in favor of “specialized establishments” for children with disabilities and against “the obsession with inclusion” in a traditional school setting. The Secretary of State in charge of the handicap, Sophie Cluzel, says on BFM TV “very angry and dismayed by Éric Zemmour’s vision of society”.

12:10 p.m. : Collapse of the country, downgrading of the French: it was at the Louvre that Emmanuel Macron’s five-year term began. 🇬🇧 To reconnect with a collective destiny and a great national project, don’t wait for the presidential election: do it! Find my statement from the Louvre ⤵️ https://t.co/jmWJY2qCZh

12:10 p.m. : “I call on you to follow the path of reason and of the heart, (…) a path in which its authority will be returned to the State, its sovereignty to the Nation, its identity to the French people.”

In a video posted on social networks, Marine Le Pen formalizes her candidacy by posing as the main opponent of Emmanuel Macron.

“I am a candidate for the presidency of the Republic”, announces Christiane Taubira. The new candidate detailed the priorities of her program with four pillars: youth, social justice, ecology and the Republic.

#COVID_19 The controversial bill transforming the health pass into a vaccination pass was voted on by the Assembly at second reading. Yaël Braun-Pivet, president of the law commission, talks about a vaccine pass on franceinfo who should be “applicable end of next week”.

Jean-Jacques Bourdin, journalist at BFMTV and RMC, is the subject of a complaint for attempted sexual assault.

Tennis world number one Novak Djokovic has been returned to Melbourne for administrative detention after his visa was canceled for the second time by the Australian government. The latter maintains that the player not vaccinated against Covid-19 constitutes a public danger. Referral hearings are scheduled for the weekend before a Federal Court to decide on the player’s possible expulsion.

11:59 : 🔴 🗣 “We will be able to reconcile the solidity of our institutions with the attention to each and everyone and in particular to the most vulnerable, this will be the spring of my presidency” concludes Christiane Taubira. Follow our live 📺⤵️https://t.co/5OxNqt4WG2 https://t.co/nRItZI6HVp

11:59 : 🔴 🗣 “Ecology is the business of the century and we know it” continues the candidate, who wants a 0-rate VAT for products from organic farming” Follow our live: 📻⤵️https://t.co/0naQZOp7fu https://t.co/dBmZHDcnF2

11:59 : If you missed Christiane Taubira’s declaration of candidacy, here are some excerpts…

11:54 : “This democratic victimization is really tiresome.”

The President of the Law Commission of the National Assembly swept aside the criticisms of the sponsorship system, recalling that “history has shown that no political current has ever been absent from a presidential election for lack of sponsorship”.

11:51 a.m. : it’s true that there were not enough candidates from the left! Fortunately Mrs. Taubira arrives…,

11:51 a.m. : In the comments, you are divided on this declaration of candidacy. Some welcome this news, others see it as just one more candidacy.

After detailing her fourth priority focused on the Republic, Christiane Taubira looks back on her career and the meaning of her candidacy. “We are different, and the Republic is indivisible because society is not uniform.”

11:44 am : “The third major priority is ecology, it’s the business of the century, we know that.”

11:40 a.m. : “I am a candidate for the presidential election, thank you for your confidence”, has just declared @ChTaubira from the district of Croix-Rousse in Lyon. #Taubira #Lyon https://t.co/FPxFOyBjRP

11:43 am : The second axis of the priorities of the candidate Taubira revolves around social justice. It proposes in particular to revalue the minimum wage to 1400 euros net per month.

Christiane Taubira now presents her priorities, starting with youth. It offers an income of 800 euros per month for 5 years to allow young people to study without having to work.

11:36 : “I am a candidate for the presidency of the Republic”, announces Christiane Taubira.

Christiane Taubira uses the figure of speech of the anaphora to draw the type of government she wants for France.

11:32 am : “#Taubira is the only one who can still bring the left together. Let’s all participate in the popular primary”, launch two elected PRG from Vaulx-en-Velin who sit in the PS majority of the mayor @HeleneGeoffroy. “We chose Taubira, the best” https://t.co/361wIQbUWg

11:32 am : Despite the freezing cold, the people of Lyon are beginning to gather on the esplanade of the climb to the Grande Côte (Lyon 4th). Local elected PS and environmentalists made the trip. The president of the radical party @Lacroix_PRG and the former PS deputy @christianpaul58 are also in the game. https://t.co/RWteUsSYbS 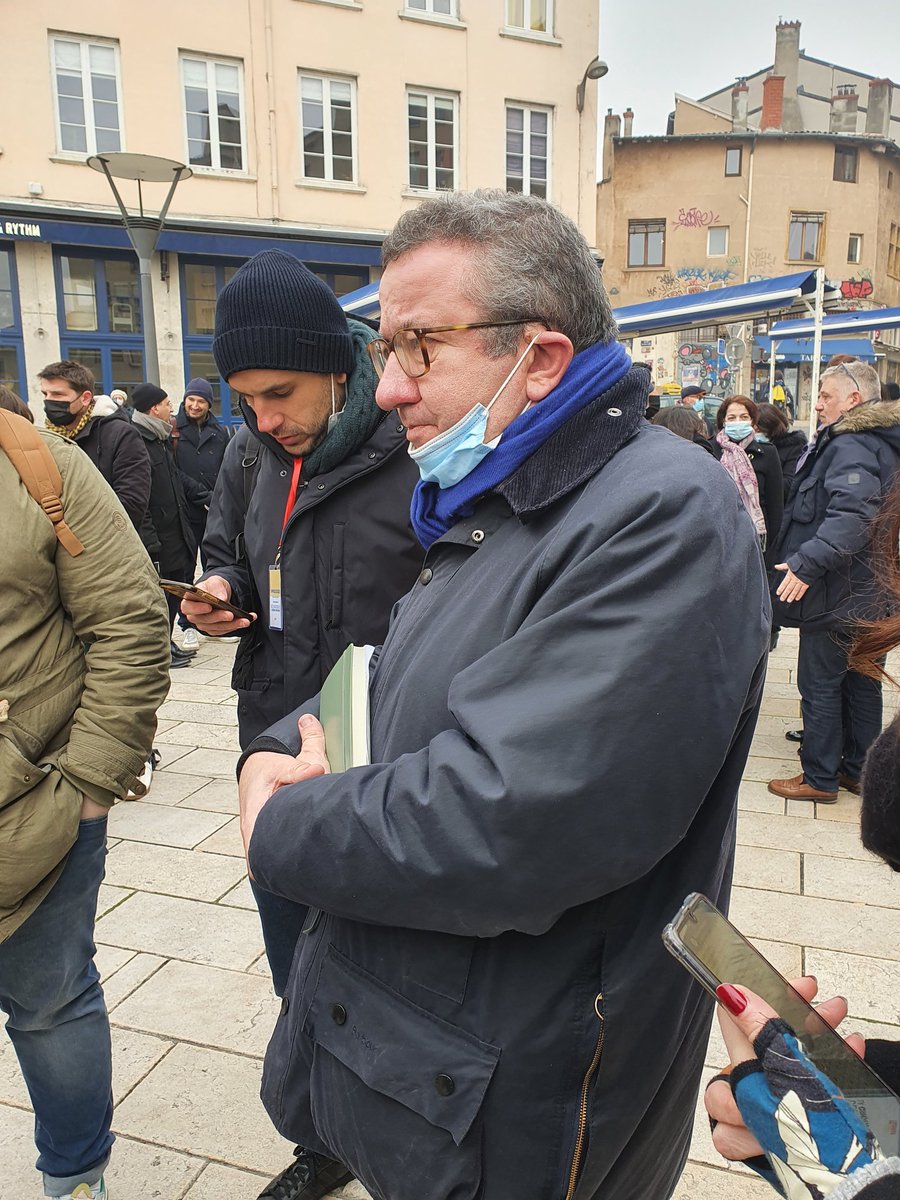 11:31 a.m. : Hello everyone ! Today, I bring you to life for @franceinfoplus the speech of @ChTaubira from the Croix-Rousse district in Lyon. The former Keeper of the Seals must officially declare his candidacy for the presidential election. #Taubira https://t.co/d7Zo0hJmY8 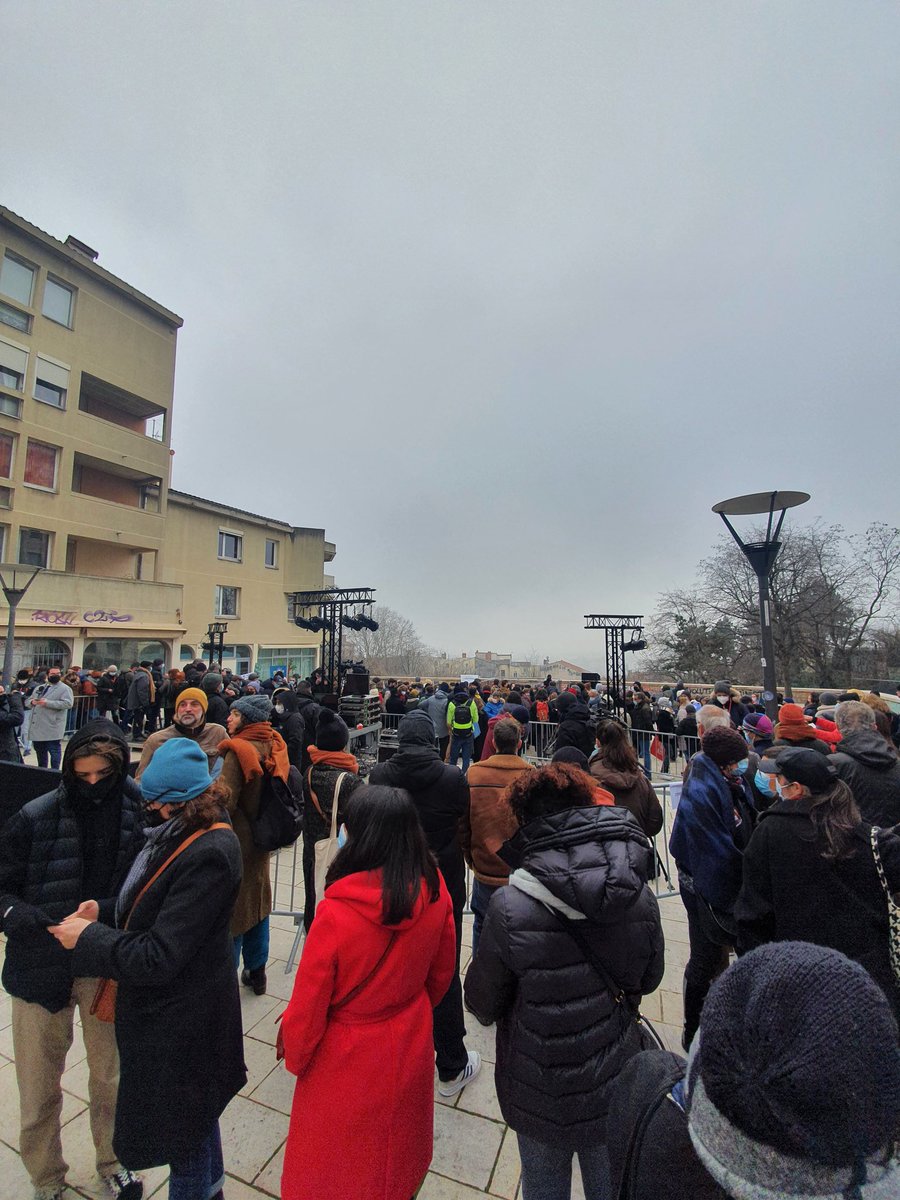 Christiane Taubira is speaking at the moment from Lyon, where she must announce her intentions for the presidential election. Our journalist Antoine Comte is on site.

11:08 : “Looking for sponsorship”, title on its side The voice of the North. The daily followed in the wake of the supporters of Jean-Luc Mélenchon in search of the 500 promises of signatures of elected officials necessary to present themselves. 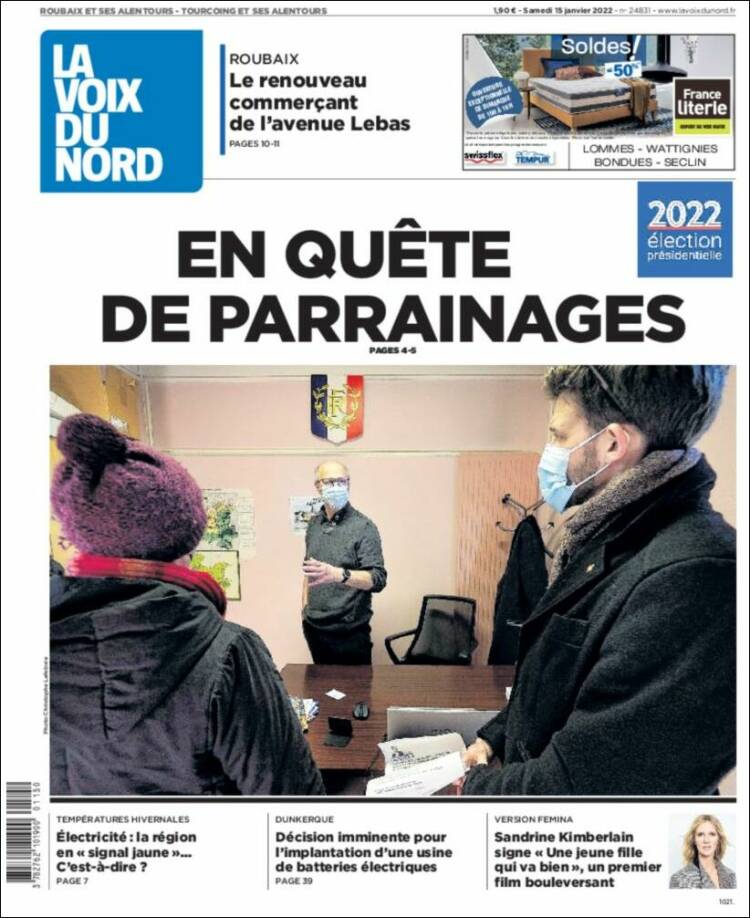 11:02 : “The threat of abstention weighs on the presidential election”, warns Le Figaro. “The candidates are worried, while the French have still not entered the campaign.“ 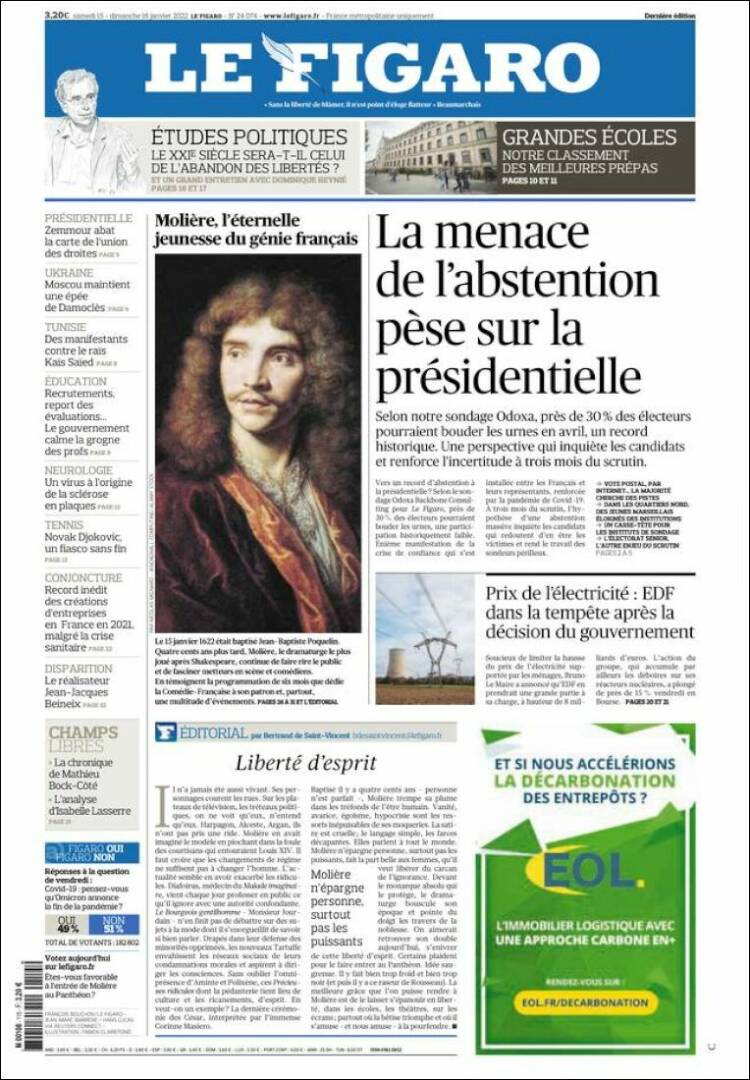 10:42 : “It’s here [au Louvre] that we are going to close the Macron parenthesis, the parenthesis of a policy which has made the French suffer a lot, which has greatly weakened our country.

Marine Le Pen officially launches today in the race for the Elysée with a speech recorded at the Louvre and which will be broadcast at midday. By choosing this place, where Emmanuel Macron had celebrated his victory against her in 2017, she hopes to revive her duel against the outgoing president.

09:54 : “Disoriented”, the activists of the Socialist Party regret “the division” from the left. While Christiane Taubira must formalize her candidacy, adding a name to the list of contenders on the left for the 2022 presidential election, franceinfo went to meet activists of the Socialist Party. Disappointed, some prepare to “a useful vote” for Emmanuel Macron or Valérie Pécresse.

10:04 am : It will put an end to the (false) suspense, today around noon. During a trip to Lyon, Christiane Taubira must lift the veil on her presidential ambitions, after announcing at the end of December that she planned to be a candidate “facing the impasse” of a left more than ever divided. We come back on this occasion to five moments which marked the career of the former Minister of Justice.

If the 2022 Qatar World Cup were today, which countries would play?