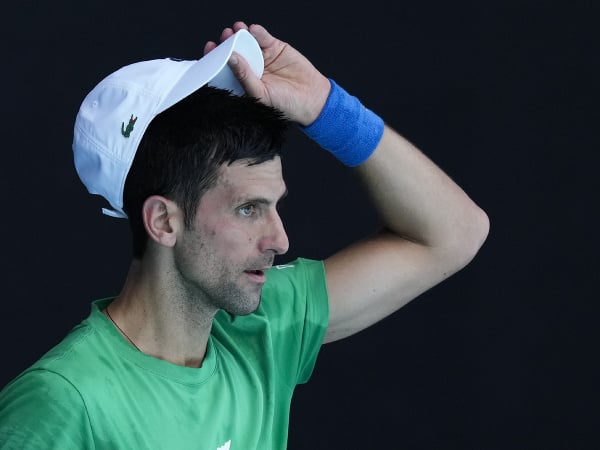 SYDNEY – Serbian tennis player Novak Djokovic was detained by immigration officials in Melbourne on Saturday and was to return to the detention hotel.

The leaders of the world ranking canceled the visa for the second time on Friday, but they were detained until the next day after talks with the immigration office, the Australian news agency AAP reported. Two vans left his lawyers’ office around three o’clock in the afternoon local time. Djokovic is to be in the detention facility, where he previously spent four nights, by Sunday morning, when a hearing is scheduled in federal court in Melbourne. This is to take place at 9.30 am local time, but it is not yet clear whether it will be before one or more judges.

This will take place at 9.30 am local time in front of three judges. Djokovic’s case will be considered by President James Allsop with colleagues Anthony Besank and David O’Callaghan. O’Callaghan proposed a multi-member court on Saturday, as an appeal against the verdict would be less likely in such a case. The only option would be the Supreme Court and there is no guarantee that it will deal with the appeal, the AP agency reported.

Judge David O’Callaghan proposed a multi-member court on Saturday, as an appeal against the verdict would be less likely in such a case. The only option would be the Supreme Court and there is no guarantee that it will deal with the appeal.

Djokovic appealed after Australian immigration minister Alex Hawke revoked his visa for the second time. The world leader will probably not be able to start at the Australian Open grand slam tournament. The 34-year-old Serb, through a lawyer, asked for a court order to prevent his deportation.

Hawke has invalidated Djokovic’s entry visas. He justified it “on medical grounds, for maintaining order and on the grounds that it is in the public interest”. Djokovic’s lawyers filed documents in court on Saturday, according to which Hawke said the player “is perceived by some people as a talisman of the community against vaccination.” In Australia, approximately 89% of the population over the age of 16 is fully vaccinated against coronavirus, but the number of new cases of omicron has increased significantly in recent days.

Djokovic faces deportation from the country only two days before the start of the Australian Open, where he should defend the title. After his visa is revoked, he risks not being able to enter Australian territory for three years. They informed the agencies AP and dpa.