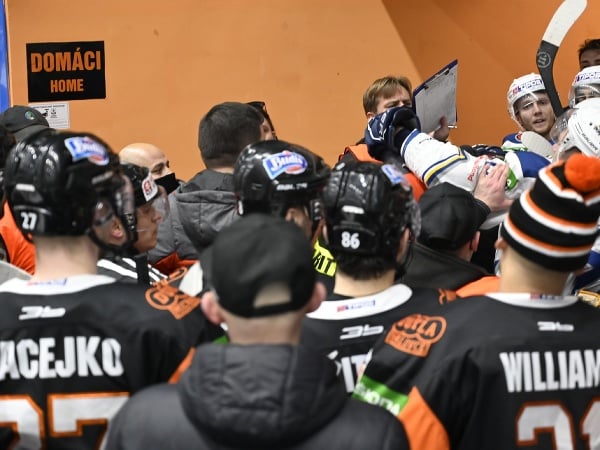 The fight between the substitutes after the end of the match of the 29th round of the Tipos extra league HK Dukla Ingema Michalovce – HK Spišská Nová Ves Source: TASR / Roman Hanc

MICHALOVCE – The duel of the 29th round of the Tipos extra league between HK Dukla Ingem Michalovce and HK Spišská Nová Ves (3: 2) had an unwanted finish. The coaches of both teams, who both condemned the fight and its probable background, also commented on the post-match rift in the areas between the changing rooms.

The organizers, members of the implementation teams and guests were involved in the conflict. “I agree with the statement that it should not happen. It is not good for Slovak hockey,” said the coach of the Michalov team Tomek Valtonen, who had indications that the conflict had arisen after shouting at one of the foreign players of the guests. “If what I have heard is true, then I want to apologize on behalf of our club. Something like this should not happen, especially not in a league that is played at the highest level and with the quality of the Slovak competition. This is not a jungle. We have to respect teams and players. “ stressed the helmsman of Michala’s Dukla. Coach Spišiakov Mosnár also expressed a similar spirit: “The match was devalued by the fact that things would happen that should not happen at the Slovak stadium. It is an insult to the players by the ´ ledármi´ and the organizing service, as well as assault and finger pointing. This pushes the whole Slovak hockey down. they threw something on the ice, but never such a thing. We can hardly build something if we don’t respect each other. “ According to the RTVS, the conflict had an end later in front of the stadium, and after another battle, the police were called to the scene.

According to the coaches, the unwanted post-match events overshadowed the welcome return of the spectators to the stands and also a quality extra-league duel. The hurricanes did not beat Michalovce in it even five times in the season, which extended the winning series to five matches. “In the first period we had a weaker movement, nevertheless we managed to score 1: 0. In the second we made two mistakes and the opponent turned to 2: 1. In the final we returned to the match, in the end we also had a chance. The boys went for it, did what they could, “ Mosnar stated. The forward Roman Faith returned to the team of the Michalov team and the defender Taylor Doherty and the forward Matej Galbavý returned to the Dukla jersey. “I think we had the best first third of the season today. We started hard, even though we didn’t score a goal. Of course, I’m especially glad we found a way to victory,” Valtonen said.