Novak Djokovic again placed in detention in Australia, pending a court decision on his fate 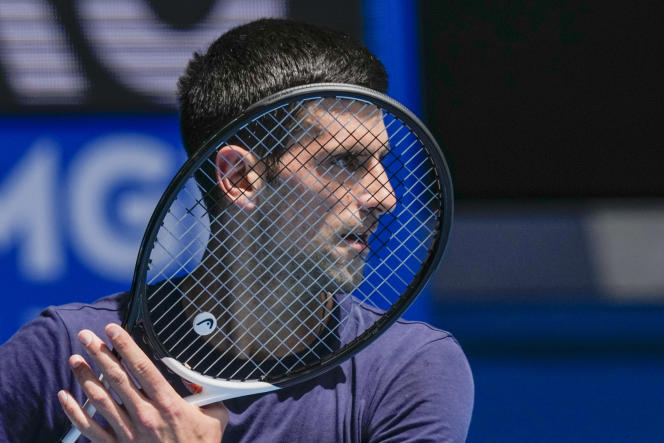 The outcome of the Novak Djokovic soap opera in Australia is getting closer. But pending a court decision on his case, the world number 1 in tennis, who is not vaccinated against Covid-19 and whose visa has been canceled a second time, has been returned to administrative detention. at a center in Melbourne, Saturday January 15.

Referral hearings are scheduled for Saturday and Sunday before a Federal Court, and authorities said Friday night that they would not expel the tennis player from Australia before the judges have ruled. The player is only authorized to leave the detention center to follow, online, the legal hearings concerning him from the offices of his lawyers, and under the surveillance of border police officers.

This is the second time the Australian government has attempted to deport Djokovic from the country. The player, vaccine-skeptic, had been blocked on his arrival in Australia on January 5 and placed for the first time in administrative detention. He had hoped for an exemption to enter the country without being vaccinated, after contracting the virus in December, but authorities have not accepted this explanation.

Djokovic admitted to filling in his Australian entry declaration incorrectly, and not having respected the rules of isolation after being tested positive. The champion, seen in Serbia and Spain in the two weeks before his arrival, contrary to what he declared in the immigration form upon his arrival, pleaded “human error”.

The Australian government suffered a humiliating setback on January 10 when a judge blocked Djokovic’s deportation, reinstated his visa and ordered his immediate release. The Serb was then able to resume his training for the Australian Open. Ultimately, Immigration Minister Alex Hawke, using his discretion in the matter, again canceled Djokovic’s visa on Friday, “on health and public order grounds”, a measure difficult to challenge in court.

In his conclusions filed on Saturday before the Court, the minister maintained that the presence of Djokovic in the country “is likely to pose a health risk to the Australian community”, because it encourages anti-vaccination sentiment and could deter Australians from getting their booster shots, he said, as the Omicron variant continues to spread at high speed.

Read also “There is a feeling of omnipotence in Novak Djokovic”

While admitting that the risk of Djokovic infecting Australians himself is “negligible”, the Minister felt that his “contempt” Passing health rules against Covid-19 is a bad example, and therefore a risk to public health. The Minister “citing no evidence” in support of his arguments, retorted the player’s lawyers.

The tournament starts on Monday

The 34-year-old aims for a 10and title at the Australian Open, which kicks off Monday, and a 21and Grand Slam victory, which would be a record. He is supposed to face his compatriot Miomir Kecmanovic in the first round.

This twisty soap opera around the tennis champion takes place in a country whose inhabitants have endured for almost two years some of the strictest anti-Covid restrictions in the world, and where elections are scheduled for May. Pressure has intensified around Conservative Prime Minister Scott Morrison, accused of“incompetence” by the Labor opposition.

Read also The Serbs are mobilizing for their star Novak Djokovic, in detention in Australia

The saga is also followed assiduously in Serbia, where politicians erect the star as a national hero. On Friday, Serbian President Aleksandar Vucic backed the player again, accusing Australia of “mistreat”.

January 4: Novak Djokovic, who then never communicated on his vaccination status, announces on social networks that he is flying to Australia, benefiting from a ” exemption » to participate in the Australian Open (January 17-30), where he is aiming for a 10and victory and a 21and coronation in a Grand Slam tournament, a record.

January 5: The Serb is stranded by Border Patrol on arrival at Melbourne airport and has his visa canceled for failing to provide “appropriate evidence” to enter Australia.

January 6: Djokovic files a legal appeal against the cancellation of his visa and his expulsion. The latter is suspended and the player is placed in a detention centre.

January 8: His lawyers say he was granted a vaccination waiver by the Australian Tennis Federation and the State of Victoria because he tested positive for Covid-19 on December 16.

January 10: A judge orders the immediate release of Novak Djokovic from the detention center, considering that the cancellation of his visa by the federal authorities was not legal.

January 14: Australian Immigration Minister Alex Hawke announces he has revoked world number one’s visa “on health and public order grounds, on the grounds that it was in the public interest to do so”. The Serb must return to administrative detention.

Abortion in France: extending the legal period, in the name of the most fragile women