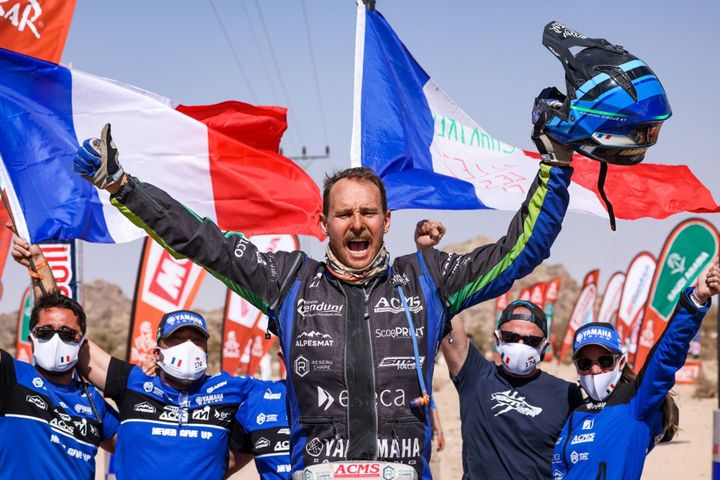 Curtain ! After twelve stages, it is time to take stock of the Dakar 2022, which ended on Friday January 14 in Saudi Arabia. If the suspense was total in the motorcycles before the final victory of Sam Sunderland, it was much less breathless in the cars where Nasser Al-Attiyah left only crumbs to the competition. Also note the first coronation of a French quad: Alexandre Giroud. A look back at the main highlights of this 44th edition of the Dakar.

The start of the Dakar marred by an explosion

The first week of the Dakar was marked by the explosion of a support vehicle on December 30, even before the start of the race. The pilot affected, Philippe Boutron, was seriously injured and repatriated to France. He has since come out of a coma. If safety around the rally-raid has been “reinforced” After the incident, it raised many questions. The Saudi authorities favored the thesis of an accident but in France, the national anti-terrorist prosecution seized six days later to investigate.

The Minister of Foreign Affairs, Jean-Yves Le Drian, even left the hypothesis of a stoppage of the race on January 7. Dakar director David Castera was reassuring a few hours later. But the results of the investigation will be eagerly awaited, to determine the origin of this explosion.

The Dakar ended sadly on Friday with the announcement of the death of a French mechanic, Quentin Lavallee. The 20-year-old lost his life in a road accident on the sidelines of the last stage of the race in Saudi Arabia. It was 11:30 a.m. when his vassistance vehicle entered a crossover and collided with a civilian truck.

Al-Attiyah, alone in the world by car ahead of Loeb

He is still far from Stéphane Peterhansel’s eight crowns in the car category, but Nasser Al-Attiyah is gradually entering the history of the Dakar. After 2011, 2015 and 2019, the Qatari has a fourth victory on his record, equaling Ari Vatanen. A success won with more than 27 minutes over his runner-up Sébastien Loeb. If Al-Attiyah won “only” two stages, he quickly took off from the competition.

“This Dakar has been fantastic. The last victory was in 2019. We did a good job with Mathieu -Baumel, his co-pilot- and the team. We were in good shape.”, declared the winner at the end of the last stage. “It was very important for me to win in Saudi Arabia. We tried twice and we finished second. I’m very happy to have finally won.”

Even if he finished far from victory, Sébastien Loeb was one of the leaders of the race. With two scratches (stage wins) and four podiums, the Bahrain Raid Xtreme rider has gotten off to a good start. The nine-time WRC world champion has thus spoken, on several occasions, of “pleasure“Of course, Loeb would have liked to claim a first victory on the Dakar. But with a third podium, after 2017 and 2019, the Alsatian tickles the heights.

No regrets, we gave it our all! We just have to congratulate @AlAttiyahN and @matthieubaumel

Thank you all for your messages during these 2 weeks #BRX #Prodrive #Red Bull #BFGoodrich pic.twitter.com/3rJJ7f1lHp

At least, Stéphane Peterhansel was quickly fixed on his fate. Accident during the first car stage, on January 2, with a torn rear axle, the title holder was declared out of the race in stride. The French pilot, all the same authorized to continue the event, therefore competed with a light spirit. Without being able to win a 15th career Dakar.

This did not prevent him from winning an 81st scratch, during the 10th stage. “I wouldn’t trade a scratch win […] against an overall victory, that’s for sure”, he indicated all the same at the end of this success. Note that he was deprived of a second victory by Henk Lategan on the last step.

“It’s a big disappointment but it’s part of motorsport “, said Peterhansel on the evening of his quack. What a bad thing for the eight-time car champion, who rather expected to see a failure of his hybrid engine. The 56-year-old driver played it more collectively, later being satisfied with the successes of his Audi teammates, Mattias Ekström and Carlos Sainz.

He had never done better than a fourth place (2019). At 40, Alexandre Giroud (Yamaha) became the first French quad winner. He wins the 2022 edition, 25 years after his father Daniel became the first to reach the finish line on this type of vehicle.

On a motorcycle, the suspense to the end

We had to wait for the very last stage to put a name on the winner of this edition. The Dakar 2022 in the motorcycle category was particularly eventful. It’s finally Sam Sunderland, leader of the general during the first week, who won.

The day before the arrival, he took over first place from his brother-in-law, the French Adrien Van Beveren. The latter has lost everything with a modest 14th place in stage eleven. A frustrating scenario for the Habs, who finished the Dakar at the foot of the podium, more than 18 minutes from the winner.