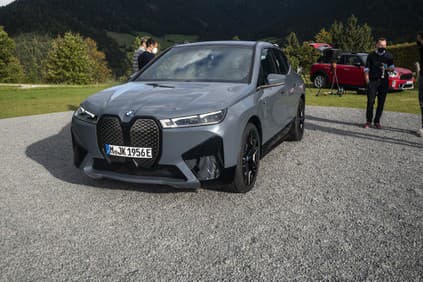 Last summer, BMW introduced the new iX model, which was adopted with considerable controversy. Some criticize the look and especially the large radiator grille. Otherwise, the belief in the car is not much to criticize. And in the end, there is no need to criticize the performance.

The basic version of the xDrive40 already has a really decent 240 kW (326 hp). So far, however, the xDrive50 has been at the top, offering 385 kW (523 hp). But BMW has now introduced a new version of the iX. The one that will reign over the offer of this truly exceptional model, whether in one sense or another. It will be the M60. It is actually the first combination of the letters i, X and M. At the same time, i means electric vehicle, X crossover and M sports version.

The drive is in charge of two electric motors, which have a total maximum output of 455 kW (619 hp). However, this is only in the short term. Really, 397 kW (540 hp) is available during normal driving. Thanks to the increased performance, it is possible to move the maximum speed higher than the xDrive50. This means that from a limit of 200 kilometers per hour, there is a limit of 250 kilometers per hour.

The iX M60’s torque is up to 1015 Nm, which means that this is the first BMW vehicle to have a torque of over 1000 Nm. According to studies in the various stages of development, BMW says that up to 1100 Nm is available in Launch Control mode. This causes massive SUVs to accelerate from zero to 100 in 3.9 seconds. Maybe a tenth earlier.

The difference compared to other versions is also the range. While the xDrive50 has a maximum range of 630 kilometers, depending on conditions and equipment, of course, the M60 can handle 575 kilometers in the same cycle. However, the M Division has improved the axles and the rear electric motor, which bears the specific features of the M, increases performance.

The M60 will also have air suspension on both axles, which is a little different for the sportier version. There will be special discs for this version, as well as a brake system and also rear axle stabilizers.

The energy storage is taken care of by a battery with a capacity of 111.5 kWh. It can be charged either with 11 kW AC or DC, while the iX M60 can handle up to 200 kW. In recalculation, this means that a ten-minute stop at such a charging station will add a range of up to 150 kilometers. In addition, there is a new version of the BMW Iconic Sounds for this model, the sounds the car makes when driving. These sounds were also composed by the famous composer Hans Zimmer, exactly the one behind the soundtracks to many, even cult films.

On the outside, the M60 differs from other models not only in the M60 badge on the boot lid, but also in the blue calipers of the brake system. The exterior also has Titanium Bronze accessories. Inside, the M logo is part of a widescreen display with a curved surface.

For the iX M60, BMW will also add a few basic features, which is also the difference from the weaker pieces. Laser headlights, the BMW Live Cockpit Professional and the BMW Natural Interaction, whatever that means, will be standard. It’s the use of multiple forms of interaction at once to make the car do something, which means combining gestures and voice instructions, for example. The M60 will also feature Bowers & Wilkins Diamond Surround System.

The new version will appear in the offer later this year. We don’t know about the price yet, but it will definitely be higher than the current 100,000 for xDrive50. Rather, it will be somewhere between 130-140 thousand euros due to the richer basic equipment. And even though we have our own photos, we took them at the introduction of the iX itself, we haven’t driven with the M60 yet, only so far there has been an embargo on the information.