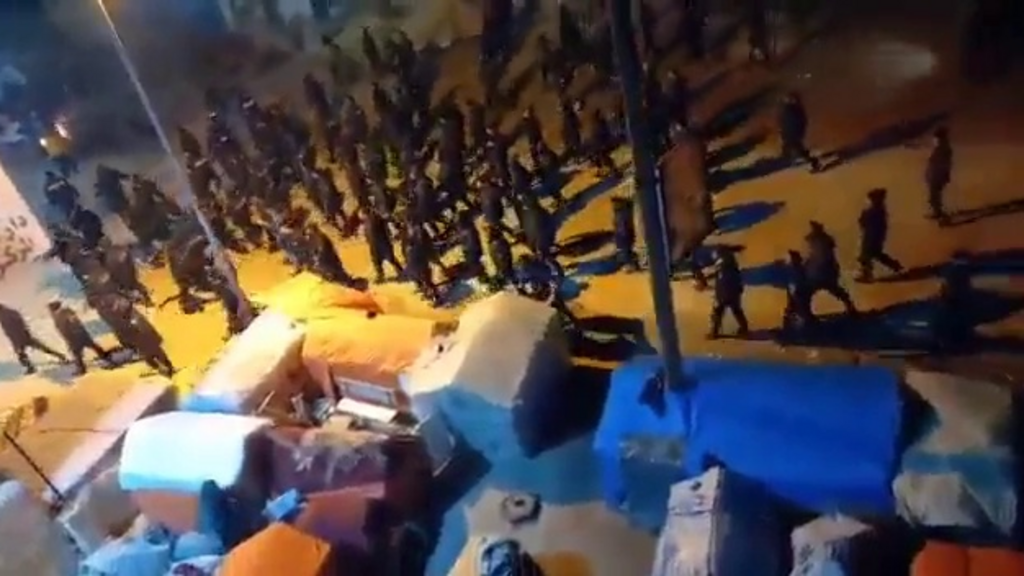 On January 10, in the early morning, Libyan security forces brutally arrested hundreds of migrants, asylum seekers and refugees who had been camping since October 2021 in front of a center of the United Nations High Commissioner for Refugees (UNHCR) in Tripoli, the capital of Libya. The center, considered a supply point for refugees and asylum seekers in Libya, was closed just before the arrival of the police, leaving hundreds of them on the floor overnight.

After a violent wave of arrests orchestrated by the Libyan security forces in October 2021, thousands of migrants, refugees and asylum seekers – most of sub-Saharan origin – had settled in tents in front of the community center (CDC) of UNHCR in Tripoli. Together, they organized demonstrations to demand protection and a way out to a third country.

But on January 10, the CDC officially closed, one month after UNHCR announced its closure, caused by the continuous influx of people camping in front of the centre, which complicated the proper functioning of the centre’s services. According to the migrants, this decision has left countless people stranded and without any help. The UNHCR informs our editorial staff that “the distribution of cash allowances, food, hygiene kits and advice have never been interrupted despite the suspension of CDC activities, and were set up in different places in Tripoli”. .

Despite this closure, more than a thousand people continued to camp outside the gates of the center – until they were violently evacuated in the early morning of January 10, an operation that led to the detention of hundreds of migrants.

“They told us that we only had 10 minutes to leave, otherwise they would take us to detention centers”

Yambio David Oliver is a 25-year-old South Sudanese asylum seeker. He arrived in Libya three years ago. He has published several videos and regularly posts information on his Twitter account “Refugee in Libya” ( Refugees in Libya).

The evacuation began around midnight. Vehicles and police arrived in several groups, making disturbing movements around our neighborhood. The tension was rising, people were afraid. They blocked the street leading to the CDC. The passage was even closed to Libyan citizens, no more cars were circulating, only military vehicles. So people started protesting.

Ante presence is heavy near the headquarters of the CDC in front of the Peaceful Commission for Refugees Libya from 103 days. We do not know whether we will be on the day or will we be evacuated. pic.twitter.com/JbTRSWU9xe

A video posted to Twitter on January 10, 2022 shows the street outside the UNHCR center as police block entrances.

A clear footage of the CDC prior to the violent raids on innocent refugees shows that the DCIM director Mej. Alkhoja led the squad himself. We call on the @hrw @amnesty @govly_en to bring the major human rights violator like Alkhoja to justice. set free all the detainees. pic.twitter.com/tPwGXScxXU

A video posted to Twitter on January 11, 2022 shows Libyan security forces addressing migrants after they blocked the street in front of the Community Day Center. Migrants and asylum seekers start singing in protest.

Police forces approached the demonstrators. The community leaders then exchanged a few words with them. They told us that we only had 10 minutes to leave, otherwise they would take us to Ain Zara detention center. During negotiations with them, we tried to understand who was responsible for the evacuation. We would leave if the UNHCR was responsible for the evacuation decree, and if temporary accommodation was allocated to us. But if not, we would stay, unless someone from UNHCR was available to put us at ease.

Migrants’ confidence in the Libyan security forces has been deteriorating for several months. 1er October 2021, security forces carried out a brutal police operation in Gargaresh, a commune a few kilometers west of Tripoli that is home to a large migrant population.

>> Read also about the Observers:Thousands of migrants arrested in Libya: “I was afraid for my safety, because my skin is black”

“Armed guards fired into the air, targeted people, and tore up tents.”

These are the same people who arrested us in Gargaresh. So we tried to negotiate, but refugees and asylum seekers came in large numbers to denounce the use of violence, with signs and chanting “evacuation, evacuation”, “freedom”, and “security”. Tensions mounted as armed guards fired into the air, targeted people and tore down tents. They started kicking the migrants and beating them with their guns. [Note de l’éditeur : The Middle East Eye a rapporté que plusieurs personnes ont été tuées dans l’incident, selon des témoins oculaires, et que les équipes médicales avaient traité au moins une personne blessée par balle].

During the events, a few managed to escape – those on the run were shot at by the armed forces of the Directorate for Combating Illegal Migration [NDLR : l’agence de sécurité libyenne qui gère les centres de détention pour les migrants, accusée de pratiques de détention arbitraire par l’ONU]. These people were rounded up and then beaten. The women were kicking each other. All have finally been forcibly crammed into buses then taken to different places, some in Ain Zara, and other detention centers.

In the midst of all this violence, some had nowhere to go, so they tried to throw themselves into Libyan houses: we were surrounded by houses belonging to civilians. But in Libya, almost every household has a gun, so they were afraid of being shot. Among us, a few managed to escape arrest.

More than 1,000 people were rounded up by the police, according to Yambio David Oliver. He managed to avoid detention by hiding in a nearby residence until daybreak. After the operation, the tents in front of the UNHCR offices were burned and destroyed.

At least 600 people were taken to Ain Zara detention center, south of Tripoli. Some had “stab wounds, traces of blows and [ont été] separated from the children,” Doctors Without Borders told the Middle East Eye.

Videos posted on Twitter show the overcrowding in the center. According to Oliver, migrants are held there in harsh conditions, including lack of food and drinking water, toilets and blankets.

An absolute inhumane situation in Ain Zara now. Hundreds kept in one shed in a place not fit for a living. Even when cattles are encamped they are always given a place to drop their own dungs ​​& a space to & fro. It is unlike for our innocent Refugees that they are nothing @hrw pic.twitter.com/vJpLPMaF7Y

A video posted to Twitter on January 10, 2022 shows people being crammed into the Ain Zara detention center after being detained by security forces.

Many migrants camped in front of the UNHCR are asking to be evacuated to third countries. Evacuation flights for asylum seekers from Libya resumed in October 2021, after being suspended for several months. Since then, Niger, Italy and other countries have allowed asylum seekers to enter their territories.