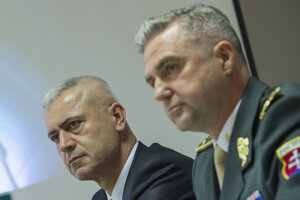 The president of the specialized court still thinks they acted logically.

BRATISLAVA. The story of oligarch Norbert Bödör is presented by the head of Smer Robert Fico as a great injustice and a fable which he had to refute until Constitutional Court. Following his decision, Bödör was briefly released on Thursday, although he remained charged in several cases.

“The Constitutional Court could not look at it and said that all the rights written in the Constitution of the Slovak Republic were violated in the case of engineer Norbert Bödör,” Fico said in a video he released on Friday.

He also defended his friend, who was also mentioned in the records from the hunting lodge, on the press the same day. He reiterated that there had been a gross violation of Bödör’s rights.

In reality, however, the Constitutional Court did not say anything like that. The SME daily analyzed the court’s finding that Bödöra was released. It follows that a relatively inconspicuous procedural error helped the oligarch to freedom. More than a mistake, we can even talk about the different views of the courts on how the work schedule of judges in a specialized court should be applied in practice.