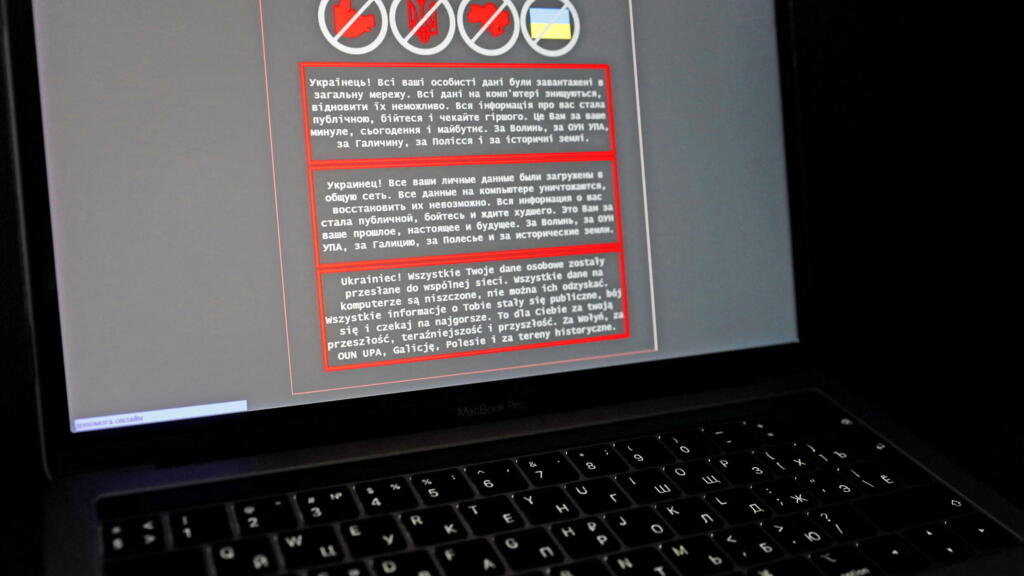 NATO announced on Friday its next cooperation with Ukraine against cyberattacks, after the country was hit by a large computer attack which sent messages to the main government sites, in the context of heightened tensions with the Russia.

NATO announced on Friday January 14 the forthcoming signing of an agreement with Ukraine to strengthen its cooperation against cyberattacks, a few hours after a vast computer hack that targeted several Ukrainian ministries.

This announcement comes against a backdrop of heightened tensions between Moscow and the West around Ukraine.

A senior US official on Friday accused Russia of having “pre-positioned” agents in Ukraine “to have the possibility of creating from scratch a pretext for an invasion, including through acts of sabotage and information operations”. .

>> To (re) see on France 24: THE DEBATE – Discussions between NATO and Russia: Is Putin a daring or a strategist?

The Kremlin called these accusations “gratuitous”, stressing that they were “not supported by any evidence”.

The agreement, which will be signed “in the coming days”, “provides in particular for Ukraine’s access to NATO’s malware information sharing platform”, Jens Stoltenberg said in a press release. the Secretary General of the Atlantic Alliance.

Ukraine said on Friday that it had been hit by a major cyberattack that targeted several of its ministries. The origin of this hack remains unknown for the time being.

This sabotage was immediately condemned by the European Union, in the midst of a tense diplomatic sequence between Russia and the West, who fear an invasion of Ukraine by Russian troops.

“Ukrainians, prepare for the worst”

The head of European diplomacy Josep Borrell affirmed that all means were mobilized to help Kiev. “You can imagine who did that,” he said.

The head of the Ukrainian presidential administration, Andriï Iermak, for his part denounced a plot intended to “destabilize the situation in Ukraine”.

Kiev and the West have in the past repeatedly accused teams of Russian hackers of carrying out coordinated attacks against their strategic infrastructure, which Moscow denies.

On Friday, Ukraine assured that it had not seen any significant damage following this “massive” attack.

A threatening message – in Ukrainian, Russian and Polish – had been posted on the homepage of Ukrainian diplomacy by the perpetrators of the attack.

“Ukrainians, be scared and prepare for the worst. All your personal data has been uploaded to the web,” read the message, along with several logos including a crossed-out Ukrainian flag.

The authorities, however, denied any data theft.

This cyberattack comes amid growing tensions between Ukraine and neighboring Russia, which Kiev and its Western allies accuse of planning a new invasion of Ukrainian territory.

Large-scale computer sabotage targeting strategic Ukrainian infrastructure in order to disrupt the authorities is one of the scenarios mentioned as being the harbinger of a classic military offensive.

Ukraine has been the target of cyberattacks lent to Russia several times in recent years, notably in 2017 against several critical infrastructures and in 2015 against its electricity network.

US justice revealed in October that it had indicted six Russian military intelligence agents for these cyberattacks and others around the world.

In 2015 in Ukraine, a cyberattack attributed to Moscow caused a power outage for several hours in the west of its territory.

Friday’s attack comes after several rounds of talks between Russian and Western officials that took place this week to defuse the crisis around Ukraine, without allowing any progress.

Russia said it did not see the point of resuming these discussions in the short term, while ensuring that it had no “intention” to invade its neighbor.

In this context, the Russian Ministry of Defense released images of military maneuvers on Friday with 2,500 soldiers and a hundred tanks taking place about fifty kilometers from the Ukrainian border.

Russia annexed Ukraine’s Crimean peninsula after a pro-Western revolution in 2014. Moscow is also widely seen as the military godfather of pro-Russian separatists at war with Kiev in eastern Ukraine since 2014.