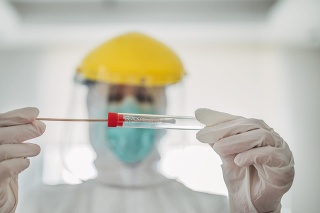 Unvaccinated people who become infected with the coronavirus variant omicron appear to be less likely than in previous variants to have a serious course of illness, hospitalization or death.

This is according to a not yet reviewed study by the South African National Institute for Communicable Diseases (NICD), the results of which were published on Friday. Reuters reported.

The study was conducted in the Western Cape Province of South Africa. It compared approximately 11,600 patients from the previous three waves of the pandemic with approximately 5,100 patients who became infected in the current wave caused by the omicron variant.

Based on the comparison, the researchers concluded that the risk of a serious course of the disease decreases with omicron by about a quarter due to the specific characteristics of this variant.

“With the wave caused by the omicron, the risk of a serious course of covid was reduced, mainly because of the protection that (for many people) the disease or vaccination provided,” it is reported in a NICD study that has not yet been evaluated by other experts.

However, the risk of hospitalization with a severe course of illness or death could – according to South African scientists – be about 25 percent lower for omicron than for the delta variant.

Omicron is often associated with a less severe course of the disease worldwide than with previous forms of the new coronavirus. Researchers are now trying to find out to what extent this is due to the specific properties of omicron or the overall higher immunity of the population provided by vaccination and overcoming the disease.