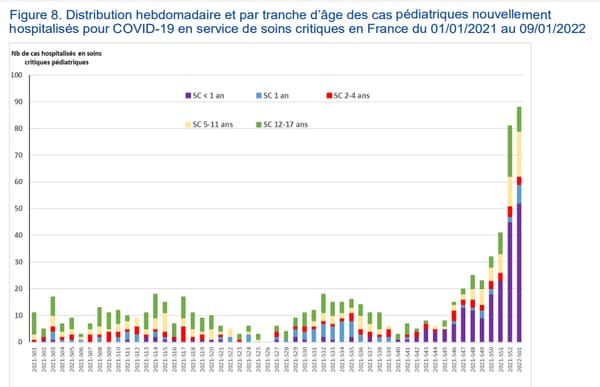 Santé Publique France notes in its latest report a significant increase in the number of under-18s hospitalized and in critical care, an increase which “mainly affects infants under one year of age”.

Children, perceived as little affected by the epidemic since the start of its spread, are also suffering the Omicron tidal wave. The number of children and adolescents admitted to hospital, and even to critical care, has never been so high since the start of the pandemic, as highlighted a report from Public Health France published on Thursday.

“In the previous waves there were only very few children affected, whereas now we have children with Covid, and quite seriously affected, without comorbidity, without disease for some”, testified at the beginning of January on BFM Marseille. , Jean-Luc Jouve, Chairman of the AP-HM Establishment Medical Commission.

Children under one particularly affected

“As in adults, hospitalizations in conventional care and critical care have been increasing among 0-17 year olds since the beginning of December 2021. This increase mainly affects infants under the age of one,” writes SPF.

There has indeed been a significant surge in hospitalizations since December. Currently, according to the Geodes data portal, 418 children aged 0 to 9 are hospitalized for Covid-19, including 74 in intensive care. The number of children under 10 in intensive care has, by comparison, barely exceeded 10 during 2021, at least until November.

While several cases of infected newborns have been reported, Santé Publique France recalls “the potential seriousness of a SARS-CoV-2 infection of the mother during pregnancy and the peripartum” and underlines “the importance of recalling the preventive measures during pregnancy: vaccination remains strongly recommended as well as the strict application of barrier measures”.

Children under 5 are indeed, for the moment, the only age group for whom vaccination has not been opened.

In proportion, the figures remain stable

The increase in the number of hospitalized children does not necessarily mean that the Omicron variant is more dangerous for the youngest. “The data do not support an increased severity of Covid-19 currently in children”, writes Santé Publique France, which explains that it is awaiting more data on Omicron, “to which it seems that a lower severity”.

But if the risks for children of developing a serious form “are very low, proportionally, statistically very low, there are some”, recalled the Minister of Health Olivier Véran at the beginning of January. And mathematically, the more people the virus affects, the higher the number of serious cases will be, even if proportionally it remains stable.

As a reminder, 0-17 year olds were particularly affected by the fifth wave of the epidemic. They represent 21.5% of the French population, but represented during the first week of January, 26% of all new cases observed, with records: thus, the maximum positivity rate was observed among 5- 11 years the week of December 27 to January 2 with 22%, “this is the maximum value observed since the start of the pandemic, all age groups combined,” writes SPF.

However, while more of them are hospitalized, in terms of proportions, the number of children and adolescents in hospital remains stable. The 0-17 year olds, “represent between 3 and 5% of hospitalized Covid-19 patients, a stable proportion since the start of the epidemic”, notes SPF. Which means that the severity of the virus does not seem to have changed for this age group.

The organization also recalls that “since the start of the epidemic, 30 children under the age of 18 have died with a diagnosis of Covid-19, of which 13 were under the age of 5, 5 were between 5 and 11 years old and 12 between 12 and 17 years old. The vast majority of them had severe comorbidities”.