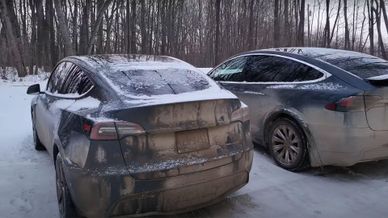 The job offer indicated possible plans for the American carmaker. This is not the first time it has been associated with Slovakia.

Tesla’s production plant in Slovakia – an idea that has been on the table repeatedly in recent years. Could it finally materialize?

The clues that suggest such a possibility have appeared on Twitter these days. Arrived with them the Czech marketer and popularizer of electromobility Ondřej Bačina, operating the portal Teslacek.tv. For information warned web TeslaMagazín.sk.

Bačina refers to its unnamed reliable source, according to which Tesla is interested in workers for the Slovak market, where it does not operate yet – it does not even have a showroom or service center. The claim is based on a specific job offer submitted to a specific person.

Unsurprisingly, controversy has spread around the potentially sensational news. One of the counter-arguments spoke of a possible misinterpretation of the offer, which may have concerned the long-awaited showroom or service.

However, on the basis of its description, the worker in question was to relate specifically to the production sphere.

However, even that does not mean anything, because the whole report brings with it several inconsistencies. Bačina also admits that it should be taken with a grain of salt and only time will tell whether Tesla has any realistic plans for the Slovak market in the near future.


Tesla electric cars in a real test: How much energy do they consume in the cold …

Where could a potential Tesla factory be located? The discussion quickly turned to the east of Slovakia and the Košice district, where the government had only recently approved the construction of the Valaliky strategic park. The project has the support of the Minister of Economy Richard Sulík and envisages a total area of ​​381 hectares.

The resort is negotiating with an unknown investor who is to be interested in an area of ​​250 hectares, informed Aktuality.sk. “I will not tell you who we are dealing with, but we hope it will work. The investor is to employ plus or minus 5,000 people. ” quoted Sulík shortly before Christmas, the daily Korzár.

Slovakia is known as an automobile country, our vehicles are manufactured by several foreign concerns. In addition to cheap labor, they have been attracted to investment incentives and tax breaks in the past. “According to some estimates, investment incentives and related costs have reached half a billion euros,” stated of his time for Aktuality.sk on the topic of the arrival of Jaguar Land Rover Radovan Ďurana from the Institute of Economic and Social Analysis (INESS).

However, the arguments supporting Tesla’s hypothetical arrival in Slovakia offset further inconsistencies. For example, separate information that a possible local plant would be dedicated to the production of Roadster and Cybertruck models.

In connection with speculation, there is talk of the production of the upcoming Tesla Roadster. It has been 4 years since its announcement and, according to current information, it will probably not reach the market until 2023.

Although the possible construction of a factory near the Košice steelworks would make logistical sense, especially in connection with Cybertruck, it is precisely a pair of models that sows another seed of doubt. These are vehicles that are primarily associated with the US market.

It is also worth mentioning other speculations that have emerged these days. According to analyst Trip Chowdhry Tesla, he is preparing a smaller variant of the Cybertruck, which would shrink its dimensions by 15 to 20%, he wrote web StreetInsider.com. This could be a model potentially targeting the European market.

However, Chowdhry also claims that Tesla already has a supplier of steel exoskeleton for both versions – Steel Dynamics, based in Texas. On the other hand, depending on market demand, there is nothing to prevent the carmaker from producing the same model in several factories at the same time.

There is also a hypothetical possibility that Tesla would produce another product – not the vehicles themselves. For example, battery cells and related products, solar panels and the like.

It is not the first speculation

The arguments against Tesla’s arrival in Slovakia also included older statements by Elon Musek that the carmaker also has a place to expand its production capacity in existing locations.

Tesla is currently working on the launch of large Gigafactory factories in Berlin and Texas. Meanwhile, there was speculation about the construction of a factory in Russia, but Musk refused at the time. “Tesla has not yet decided on a location for the fourth Gigafactory,” said Tesla’s boss in September. warned then the Electrec portal.

Slovakia is not associated with Tesla for the first time. The Slovak Investment and Trade Development Agency (SARIO) negotiated with the carmaker in 2014. The state was then in contact with Tesla again in 2016. In both cases without result.

In any case, time will tell whether there was a grain of truth in the wild speculation. The information provided so far should be taken with caution.

At least we can find out more about Tesla’s global plans on January 26, when the company will report quarterly results for the last quarter of last year.