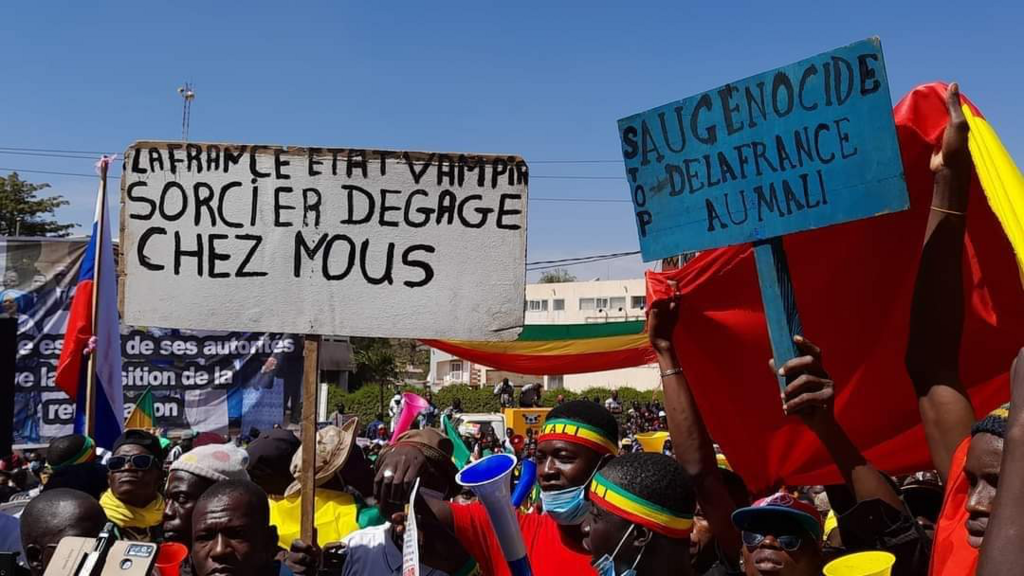 Thousands of Malians demonstrated on Friday against the ECOWAS sanctions decreed to punish the soldiers who postponed the elections and the transition for several years. At the same time, Colonel Assimi Goïta, head of the junta, validated a government “response plan” to West African sanctions.

At the call of the junta, the Malians demonstrated massively, Friday January 14 in Bamako and across the country, against the West African sanctions and the international pressures which do not weaken, noted the correspondents of the AFP.

Dressed in the national colors of green, yellow and red, thousands of demonstrators began to gather in the capital, on Independence Square for the weekly prayer opening an afternoon of mobilization orchestrated by the military.

Some demonstrators spent the night on the boulevard serving this high place of Malian demonstrations.

Images posted on social networks show a dense crowd marching behind the national flag in the streets of Kadiolo, bordering Côte d’Ivoire. Similar scene in Bougouni, also in the south.

Malians interviewed by an AFP correspondent said they took to the streets, not to support the junta, but to defend the country.

At the same time, the head of the junta and transitional president, Colonel Assimi Goïta, validated a government “response plan” to West African sanctions, his services indicated on Facebook. The plan has several components, diplomatic or economic, they say without further details.

“The objective of this plan is not to be in an arm wrestling posture [avec les organisations ouest-africaines, et le Mali reste] open to dialogue,” they say.

The Malian government launched Monday, the day after the “extreme” retaliatory measures according to him taken by the organization of West African states ECOWAS, a call “for a general mobilization throughout the national territory”.

Colonel Goïta, brought to the head of Mali by a first coup in August 2020 and enthroned president “of the transition” following a second in May 2021, urged Malians to “defend [leur] country”.

Mali, already plunged into a serious security and political crisis since the outbreak of separatist and jihadist insurgencies in 2012, has been facing heavy sanctions from ECOWAS since Sunday. These punish the military’s plan to continue to govern for several years, and the revoked commitment to organize elections in February 2022 that would have brought civilians back to the head of the country.

The closure of ECOWAS borders, the embargo on trade (excluding basic necessities) and on financial transactions as well as the freezing of Malian assets in West African banks pose a dangerous threat to the economy of a country among poorest in the world, tested by violence and the pandemic, landlocked and heavily dependent on the West African ports of Senegal and Côte d’Ivoire.

>> To read also on France24.com: In Mali, “France is paying the price for its ambiguity”

West African companies, as well as Air France, have suspended their flights to Bamako. The country risks suffocation for lack of liquidity. Mali was unable to complete an operation on the regional financial market on Wednesday. It is “cut off from the rest of the world”, declared Kako Nubukpo, commissioner for the West African Economic and Monetary Union (UEMOA).

The sanctions have aroused a chorus of disapproval in Mali. ECOWAS is accused of being the instrument of foreign powers and an outdated club of leaders cut off from the people.

The UN at work

The junta wraps itself in national sovereignty. She asked for up to five more years. She said she was currently unable to call Malians to the polls, citing the persistent insecurity in a territory two-thirds of which are beyond the control of the authorities. She claims time to carry out essential reforms according to her, and to organize indisputable elections.

No significant voice was raised in Mali to approve ECOWAS. On the other hand, a certain number are pressing for a resumption of discussions with ECOWAS, worrying about the international isolation of Mali.

Colonel Goïta assured to remain “open to dialogue with ECOWAS”.

UN Secretary General Antonio Guterres called on the Malian government on Thursday for an “acceptable” electoral calendar, recalling that ECOWAS could then gradually lift the sanctions.

Mali’s partners as important as France and the United States have lent their support to West African sanctions. The head of European diplomacy, Josep Borrell, indicated Thursday that the European Union would take measures “in the same line” as those of ECOWAS.

No way out of the crisis is discernible for the moment. The UN secretary general said he was working with ECOWAS and the African Union to create the conditions for the junta to return to a “reasonable and acceptable” position.