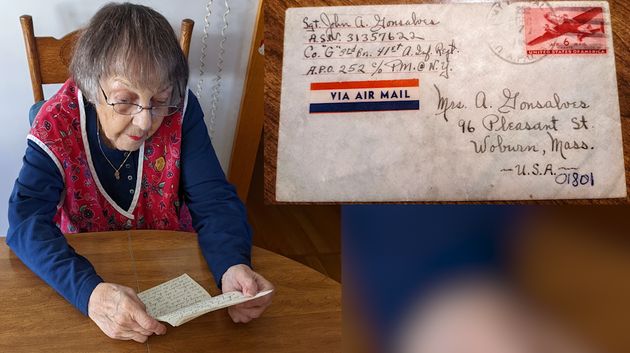 Angelina Gonsalves received this letter from her husband 76 years late.

UNUSUAL – Angelina Gonsalves received a letter that should have arrived safely 76 years ago. The United States Postal Service sent him a letter that his deceased husband had written to his mother while deployed overseas in 1945.

The letter is from Sergeant John Gonsalves, a soldier formerly stationed in Germany. 22 years old at the time, he wanted to hear from his family and let his mother know that he was planning to return to Massachusetts soon. The letter dated December 6, 1945 will never reach its recipient, but it was delivered by the USPS to his widow, 76 years old and three days later.

“I was able to read it and it was wonderful,” says the American to CNN. “She is in very good condition. I myself was amazed by that”. In the two-page letter, John talks about the “crappy” food and bad weather in Bad Orb, near Frankfurt (Germany). He ends by showing his love to his family, who remained in America.

Although this letter was not intended for her, Angelina Gonsalves was delighted with this discovery. “It was a joy to see her face light up reading her words,” Brian Gonsalves, the couple’s son, told CNN. “Being able to see her read something he wrote and reminisce about that story is something she will never forget.” The letter written by Sergeant John Gonsalves was intended for his mother.

In search of the lost addressee

One question remains unanswered: Where was the letter hiding all this time? No one has a definite answer, but she was found at a treatment center inUSPS of Pittsurgh last December. The center’s employees understood the value of this find and began a search to find the next of kin of the soldier John.

They eventually found his widow, and accompanied the soldier’s letter with this explanation: “We are aware of the death of your husband in 2015 […]. Thanks to the dedicated detective work of the employees of this establishment, we have been able to determine your address, hence the delivery of this letter to you, albeit 76 years late. Because of its age and its importance to your family history, it was of the utmost importance to us to deliver this letter to you.”

Angelina finally received the letter on December 9, just before the Christmas holidays. “It’s as if he had come back for the holiday season,” ends his son.

See also on the HuffPost: She buys a 100-year-old photo album and discovers a family member in it