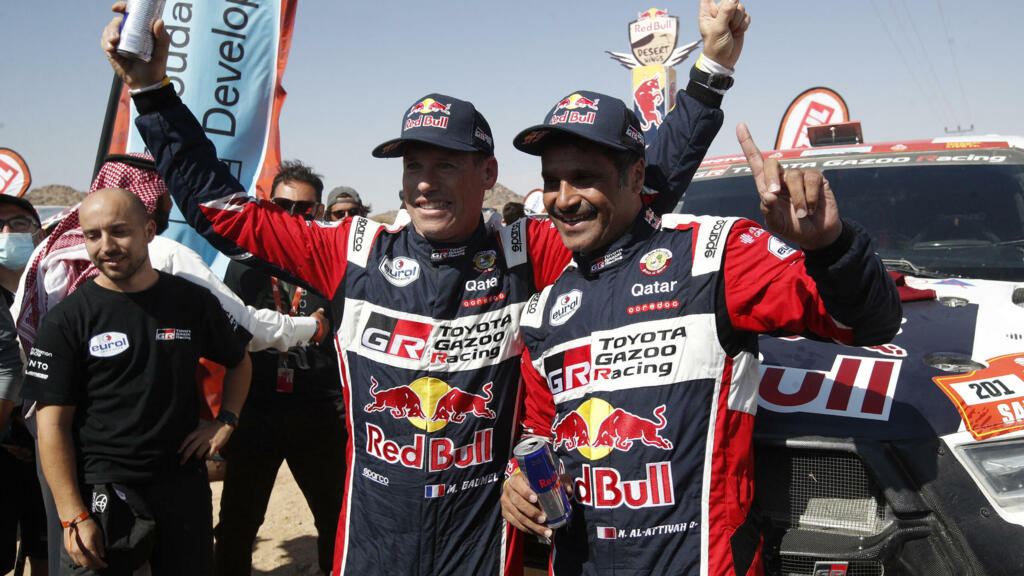 Qatari Nasser al-Attiyah and Briton Sam Sunderland won the 2022 edition of the Dakar Rally in Saudi Arabia on Friday, also marked by the death of a French chief mechanic in an accident.

Repeat offenders, Nasser al-Attiyah (Toyota) and Sam Sunderland (KTM) won the Dakar-2022, Friday January 14, in Jeddah, Saudi Arabia. The fourth victory for the Qatari in a car and the second for the Briton in a motorcycle.

The finish was bereaved by the death of a French chief mechanic from the PH Sport team, Quentin Lavallée (20), in a road accident. “His passenger, Maxime Frère, of Belgian nationality, was injured and transported conscious to the National Guards Hospital in Jeddah (west) where a complete assessment is in progress”, specify the organizers in a press release.

In the lead since the first stage, the 51-year-old Qatari counted up to 48 minutes before controlling the last days.

“The feeling today is incredible, we are very happy”, he reacted, while his co-driver Mathieu Baumel, for whom this is the third coronation, returned to the difficulty of managing their important lead. “That means not riding but you still have to not be too far away. We listen to all the noises, we pay attention to everything and it’s ultimately more stressful than being on the attack,” explained the Frenchman. .

Loeb was not unhappy, despite a difficult start to the race: “We thought ‘it’s dead, it’s over’ (by losing 30 minutes from the second stage, editor’s note) but, in the end, we managed to fight for second place, it’s still a great rally”.

“Given the very tight gaps, we were never able to make up (this delay) but we had stage victories, beautiful specials, it’s nice”, continued the nine-time world rally champion.

“Exhausting on my nerves”

In motorcycling, Sunderland, 32, finally achieves a second success, after 2017 in South America.

He is ahead of the Chilean Pablo Quintanilla (Honda) by 3 min 27 sec and the Austrian Matthias Walkner (KTM) by 6 min 47 sec. Frenchman Adrien Van Beveren (Yamaha) finished at the foot of the podium, 18 min 41 sec.

The first British biker to win the Dakar, Sunderland almost doubled the lead in 2019 and 2021, but only finished 3rd.

This winter, he started a new adventure. After six editions with the Red Bull KTM factory team, he joined GasGas. This questioning was fruitful.

“I stayed in the race and did a good job yesterday (Thursday) but it was very tight this year,” said the Briton. “I waited ten minutes before the victory was confirmed at the finish, it was exhausting for my nerves.”

“It’s even better than the first one, it’s been five years of waiting, it’s very long,” he added.

Sunderland, leader of the general during the first week, animated the last days, to finally take back the first place from his brother-in-law Van Beveren (he is married to the sister of the French driver) only on the eve of the finish .

The Habs nevertheless expressed satisfaction: “It’s moving for me to finish this Dakar, I remember my ability to be back on top after four hard years to live with breakages, falls”, commented the Yamaha rider , a tear in the eye.

In addition to fears related to the health situation, other concerns have interfered after the explosion of a vehicle, the origin of which remains officially unknown.

This explosion, which occurred on December 30 in Jeddah, seriously injured the French pilot Philippe Boutron, 61, repatriated after having been operated on.

French justice has opened an investigation for “attempted assassinations in connection with a terrorist enterprise”.

What is still officially described as an “accident” by the organization and the authorities has caused a drastic reinforcement of security measures around the competition.

Saudi leaders, criticized for the kingdom’s human rights violations, have been using sport for several years as diplomatic leverage to improve the country’s image on the international scene.

The Dakar-2022 also saw hybrid engines arrive in rally-raid (notably with Audi in the car), with performance well above the conventional plateau, but reliability problems incompatible with an overall result.