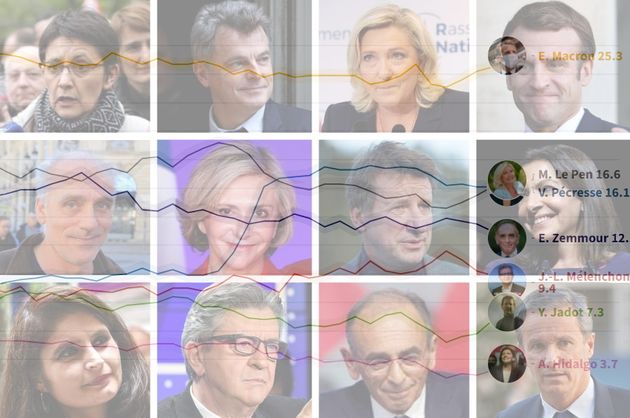 All voting intentions in the HuffPost poll compiler 100 days before the 2nd round of the 2022 presidential election.

POLITICS – Who will be declared the winner of thepresidential election in exactly 100 days? In view of the political context and the various surveys available, it is impossible to say so. Because if Emmanuel Macron, who is still not an official candidate, is currently leading the race in the first round voting intentions, difficult to anticipate what will happen in the event of a second round against the right, the extreme right or – let’s be crazy – the left.

Because the conditions of access to the second round were strongly disturbed by the candidacy ofEric Zemmour, which mechanically lowered Marine Le Pen’s scores, thus offering a small space to Valérie Pécresse. For several days in fact, the three have been jostling for 2nd place, fluctuating between 12 and 16% of voting intentions. A match within a match in which the candidates RN and LR distance the candidate of Reconquest!.

As our poll compiler below shows, Éric Zemmour seems caught in a negative spiral, unlike his two rivals. Thus, the polemicist stagnates at 12.7%, while it peaked at 17% in the fall. Conversely, Marine Le Pen has regained color, after the low suffered in October, even if she is (very) closely followed by the president of the Île-de-France region and the two are fighting now in a pocket handkerchief.

On the left, the situation is still just as gloomy. Like the candidacy of Anne Hidalgo which continues to sag. Prisoner of a campaign to the point of death who chains the difficulties, the mayor of Paris is stuck in the abyss, posting the score of 3.2%. If his environmentalist competitor Yannick Jadot does better, he also has reason to worry: 6.6% of voting intentions, a dead loss of four points since last summer.

It is therefore always Jean-Luc Mélenchon who is ahead of his rivals on the left. Hoping to surf on the “useful vote” effect, the rebel is the only one to exceed the 10% mark. Insufficient leadership to qualify for the second round, and which could be disrupted by the entry into play of Christiane Taubira.

If she is not an official candidate (which explains her absence from our compiler), the former Keeper of the Seals could declare herself this weekend by agreeing to go through the popular primary. A designation process in which the other left-wing candidates refuse to participate, but which could allow him to trigger a dynamic. Enough to redistribute the cards? Answer in a few days.

The poll compiler HuffPost, how it works?

Each new poll of voting intentions for the presidential election is taken into account in our compiler. This then calculates the new average of the scores achieved by each candidate (who has already obtained more than 5% on several occasions) on the last five published surveys. The more recent the survey, the greater its weight in this average. Click here to download the list of all polls used for this article. Note that Christiane Taubira does not yet appear in our compiler because too few surveys have been carried out with her application.

See also on The HuffPost: Valérie Pécresse boasts of a “totally equal” team, but…