Immunologist Leksa criticizes new COVID rules: They complicate the lives of the vaccinated! These FOUR measures would be enough – Topky.sk 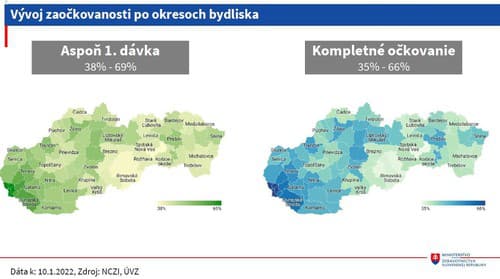 According to the new COVID manual, nothing should be closed. All services, operations or mass events will be governed by four basic regimes and mass events also by risk. Immunologist Vladimír Leksa told Topka that there are four measures that would be enough in this situation.

The new COVID manual for everyone: It can only end before Easter! The fourth dose is not yet being considered

These four measures would suffice

The new measures contain the same mistakes as all the measures that were introduced in our country during the pandemic, the immunologist thinks. “Measures should be clear, simple, precise and stable,” he said for Topka, saying that in the current situation it would be enough to follow four basic measures. “First of all, hospitals and paramedics need to be supported,” Leksa stressed.

“Secondly, since we have been given extra time, it is necessary, as long as we can, to push as hard as possible to vaccinate those who have not done so before. If they do not, it is necessary to limit them in particular. to cope faster and with less damage to the health of citizens and society, “ suggested.

Thirdly, according to Leks, it is necessary to strictly require the wearing of respirators indoors. “And fourth, with any respiratory illness, you don’t even have to test whether it’s COVID or not, you have to stay home and not spread it. These four measures are enough.” stated.

They complicated life, especially for the vaccinated

However, according to the immunologist, the new measures introduced by the government this week, which will enter into force on January 19, are complicated and complicate life, especially for the vaccinated. “After experience, it is very likely that they will change frequently and are even more likely that they will not be complied with and that compliance will not be controlled and required.” Leksa stated.

According to him, the measures are unfair, especially for the age category of teenagers who are not yet entitled to the third dose. “But they are required if they want to go to a larger cultural event.” Currently, children and teenagers aged 12 years and two months to 18 years in the OP + regime are required to take a negative test in addition to vaccinations.

“They will be forced to pay for a PCR test, even those who have been vaccinated twice. They are young and very likely to be comparable to those in the older age groups after two doses,” clarified the immunologist. According to him, the measures will therefore affect responsible young people who have been vaccinated and who would like to support our culture. “After the government’s experience in managing nationwide actions to date, I am convinced that regional authorities would do better today.” added to the address of the measures.

Omicron wave is easier in countries with high vaccination and inferiority, Slovakia is not one of them

The measures were taken mainly due to the oncoming wave of omicron. Although the new variant is not more dangerous, it is spreading extremely fast. In the countries where it prevails today, it does not cause a large increase in hospitalizations or difficult conditions, but it is a highly vaccinated and overpriced country. Slovakia is not one of them, so it is possible that the course of the omicron wave in our country will be worse than in other countries. “The Omicron wave is coming fast and fast in all countries so far. But this is especially true in countries with high vaccinations, where, despite high infection numbers, they do not have flooded hospitals, intensive care units and lung ventilation.” Leksa said.

“They live lives with minimal restrictions, the bigger restrictions apply to people without immunity to COVID. But it’s also partly due to the nature of omicron, which causes less severe pneumonia. But it’s definitely due to high vaccinations and overcrowding.” he said that this can be seen, for example, in the USA, where the situation is worse today compared to Britain, where they have much higher vaccinations.

According to Leks, it can be expected that the omicron wave in Slovakia will run worse than in the more vaccinated countries west of us, but better than during the second and third waves. “Maybe by the time spring comes, we could have it behind us. What the damage will be depends on the government and each of us,” he added.

One thought on “Immunologist Leksa criticizes new COVID rules: They complicate the lives of the vaccinated! These FOUR measures would be enough – Topky.sk”