“It was a waking nightmare”: after the riots in Kazakhstan, the inhabitants are in shock 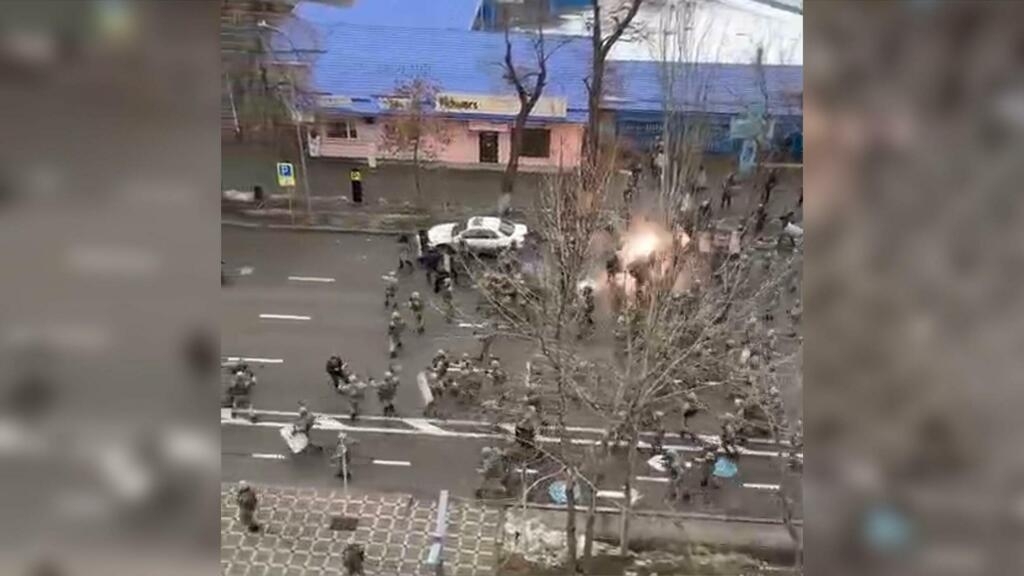 Peaceful protests against rising fuel prices escalated into violence from January 2 to 9 in Kazakhstan, killing dozens and injuring hundreds. Videos show ransacked shops and burnt buildings. During the violence, most of the inhabitants of the former capital Almaty remained cloistered in their homes, deprived of the Internet. We were finally able to talk with a resident, who recounts five days of chaos and a bruised city.

After a week of demonstrations, riots and repression, the people of Almaty have found their city turned upside down. Burned cars, ransacked shops: amateur images show scenes of devastation in the streets.

The police initially seemed outdated by demonstrators who stormed City Hall during the day on January 4. In the evening, they began to violently repress the demonstrations. Kazakh President Kassym-Jomart Tokayev has appealed for help from Russia and its allies in the Collective Security Treaty Organization (CSTO) to restore order. On January 7, the president authorized the police to shoot “to kill without warning” on the protesters. Nearly 8,000 people were arrested.

After several days of daily blackouts, Almaty residents have regained stable access to the Internet. Lyazzat, who lives in Almaty, took the opportunity to respond to the message from the editorial staff of Les Observateurs. She recounts the atmosphere in the city after the return to calm:

We are still in shock: how could such a thing happen in our city? It hurts to see the ruins of my favorite shops, the destroyed Soviet architecture buildings – that was the pride of our city! – and also to see the losses inflicted on the small businesses of the inhabitants. It was their livelihood, and the marauders destroyed it all.

Yet when the protest movement against rising gas prices began peacefully in the capital on January 4, it was difficult for him to imagine that it would end in such violence. The president agreed to reduce the price of liquefied petroleum gas (LPG) on the evening of January 4, and Lyazzat thought the dispute was over. But the movement has changed:

At one point, everything turned into chaos, which shocked everyone. Groups of strangers began to provoke the crowd and maraud throughout the city. They attacked police officers, destroyed administrative buildings, not to mention shopping malls. They weren’t just civilians. The inhabitants did not give in to their provocations and dispersed.

>>> READ ON THE OBSERVERS: Kazakhstan: public buildings stormed by demonstrators who “have nothing more to lose”

Law enforcement used stun grenades and tear gas to disperse the demonstrators, some of whom were armed with batons and shields taken from the police, as shown many amateur videos. Another video released on January 5 shows protesters take guns in the trunk of a car. According to Amnesty International, the police also used firearms.

This video posted on January 5 shows protesters with guns.

In this video posted on Telegram on January 5, civilians are seen as gunshots are heard. A body is on the ground.


Like many residents, from January 5 to 9, Lyazzat did not leave her home. Messages by text message or loudspeakers instructed locals to stay in a safe place for the duration of the “anti-terrorist operation”. Several independent news sites have been blocked. Despite the Internet shutdown, Lyazzat was trying to find out:

We received information only by telephone through our relatives, or by watching television. (…). Near our house, a shop for hunters was robbed, we heard the noise [depuis chez nous]. We live in the center, and we heard firefights all night long for several days in a row. It was very scary, it felt like it was never going to end.

“Some help to clean the city, others prepare food and collect warm clothes for the soldiers”

On January 9, the Ministry of Information published a report reporting 164 dead, before withdrawing it the same day citing a “technical error”, without publishing new figures. A national day of mourning was decreed on January 10 to commemorate the many victims, both civilians and law enforcement.

Life now seems to be back to normal in Almaty, says Lyazzat:

Today, life in Almaty is gradually returning to calm. The internet has been working fine for two days, public transport is working again, people are going to work. Markets and shops are open. At first, there were shortages of products like bread and vegetables, but now everything is back to normal and stores are gradually filling up their reserves.

Many volunteers are organized to help the damaged companies, as well as the soldiers who stand guard in the city. Some help clean up the town, others prepare food and collect warm clothes and socks for the soldiers.

In this video posted on TikTok on January 12, the man in the pickup explains to a resident that he distributes free food packets to people in need.

Along with reversing the gas price hike, the protests demanded the departure of former President Nursultan Nazarbayev, who ruled the country for 28 years. After giving way to Kassym-Jomart Tokayev in 2019, he nevertheless remained at the head of the Security Council.

President Tokayev removed him from this post on January 5, and accepted the government’s resignation. The former intelligence chief has been arrested for suspicion of treason. During a videoconference on January 10, the Kazakh President accused foreign “combatants” for taking part in the riots, which he called “terrorist attacks” and an “attempted coup”.

The vaccination pass comes into force in France

One thought on ““It was a waking nightmare”: after the riots in Kazakhstan, the inhabitants are in shock”