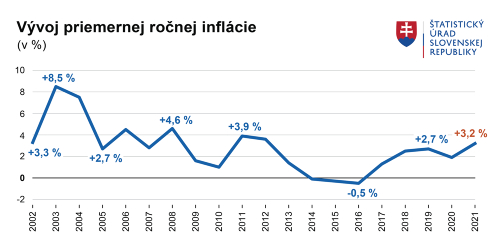 “Developments during 2021 were turbulent, while in the first two months consumer prices rose by less than one percent, their growth rate gradually increased. Since July, year-on-year price growth has risen above three percent and in the last month of the year approached six percent, ” noted the director of the price statistics department, Štefan Adamec.

Last year, prices rose in all 12 main components of the consumer basket. Higher prices in transport had a significant effect, especially the growth of fuel prices on an annual average by 17.3%. According to statisticians, this growth is also a consequence of the base effect, as fuel prices fell in 2020 and 2019.

Rising prices of tobacco products after tax adjustments in March 2021 also had a significant impact, rising by 13.7% year-on-year. “The rise in prices was also supported by a major reduction in the state’s subsidies for school lunches, transformed into a 13 percent increase in company meals in 2021. And more expensive newspapers and periodicals, whose prices rose by an average of more than ten percent, also contributed to the overall growth.” statisticians pointed out.

The increase in building materials, in turn, was reflected in imputed rents, the price of which increased by 6.2% for the whole year (in 2020 it was only one percent). Imputed rents belong to the largest expenditure group of Slovak households – housing and energy.

Statisticians took a closer look at the development of the two most monitored components – housing and energy (accounting for 25% of household expenditure) and food and non-alcoholic beverages (18% of expenditure). “Surprisingly, from a year-round perspective, both the most important components of expenditure, both food and housing, had a rather dampening effect on the growth of the annual inflation rate.” commented Adamec.

Last year, the inhabitants of the Slovak Republic increased their expenditures on housing and energy by only 1.3%, which is less than in the previous three years. Throughout 2021, the growth of prices of this component was dampened by cheaper energy, especially gas (a decrease of almost ten percent) and electricity (a reduction of 4.3%).

The food also went up

The growth of food prices (excluding soft drinks) reached 1.9%, which is the lowest value in at least the last four years. “Food prices have grown more dynamically in previous years, by 2.8% in 2020 and even by more than four percent in 2018 and 2019,” concluded Adamec. The development of prices of nine groups of food products was relatively different, the prices of oils and fats increased the most by seven percent, vegetables by 3.9% or bread and cereals by 2.7%, but also milk, cheese and eggs by 1.8%. Meat became more expensive by 0.5% and the price was reflected only in fruit (a decrease of 0.6%).

What else awaits us?

Analyst Eva Sadovská from Wood & Company also presented her forecast for the next period. “While inflation reached 0.7% in January 2021, it reliably exceeded 2% in May, reaching 5.8% in December. Year-on-year inflation for 2021 thus reached 3.2%. We expect that in the first quarter of 2022 will be even higher and will attack 7%. The rise in the coming quarters of this year should slow down, ” analysts expect.

“We currently expect average inflation in 2022 at the level of 5-6%. We expect a similar price development in the case of food. Food inflation should reach the highest level in the first quarter, around 7%. Subsequently, the year-on-year growth rate should slow down. While energy (electricity, gas and heat) was cheaper year-on-year in 2021, this trend will reverse in 2022 due to rising energy prices on world markets. due to higher electricity and gas prices. Even in 2022, in the coming months, we will still feel the effect of more expensive tobacco, fuel and building materials in inflation. “ adds.