At the trial of the November 13 attacks, the math teacher and the terrorist’s “parcel of humanity” 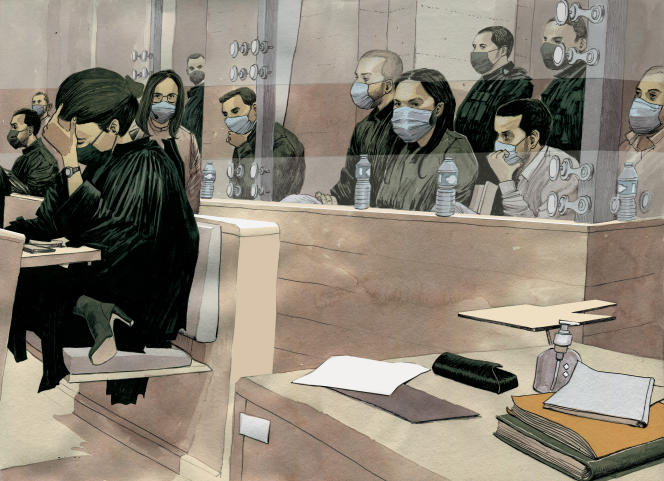 Osama Krayem said only one word on Thursday January 13: ” No “. The president of the special assize court of Paris had just asked him if he intended to answer questions during this hearing devoted to his first interrogation on the facts. No, so.

His refusal to speak is not a surprise. Since November 25, 2021, five defendants in the trial of the November 13, 2015 attacks have refused to appear in protest against the decision of Belgian investigators to testify anonymously by videoconference from Brussels. All had ended up returning to the box over the weeks, except one: Osama Krayem. If he finally agrees to appear for this interrogation, it is as a simple spectator at his own trial.

One of his lawyers, Ms.and Margaux Durand-Poincloux, had read a letter from the accused, on January 6, explaining the reasons for this silence: “At first, I wanted to express myself in court and I tried to do so when my personality was addressed. Then I saw how the proceedings were going and lost hope. I don’t think anyone is here to try to figure out what happened and get answers. I feel that we are all pretending and that this trial is an illusion. I no longer think, today, that expressing myself on what I am accused of changes anything in the decision of the court. I made the decision not to speak again until the end of the debates. »

Read also Article reserved for our subscribers At the trial of the attacks of November 13, the redacted biography of four fighters of the Islamic State

“I am a Daesh soldier”

Osama Krayem’s silence is all the more annoying since he is one of the main defendants in this trial. This Swedish jihadist is accused of having planned an attack at Amsterdam’s Schiphol airport (Netherlands), the day of the attacks of November 13, 2015. Four months later, he had given up at the last minute on setting off his bomb in the Brussels metro, which earned him a new trial in the trial of the attacks. from Brussels. This former fighter of the Islamic State (IS) organization was also identified in excruciating propaganda video showing the execution of a Jordanian pilot burned alive in a cage in Syria, for which a “war crime” investigation has been opened in Sweden.

Also read the survey: Article reserved for our subscribers Roissy, Schiphol, “metro” … The gray areas of the investigation into the attacks of November 13

“Good…very good. Sit down, Mr. Krayem”, sighs the president. Long hair falling over his shoulders, eyes low, Osama Krayem sits down. The magistrate begins his mock interrogation by reading the statements made by the accused during the investigation: “I am a Daesh soldier, I adhere to its philosophy unconditionally”; “The penalty for him who mocks the prophet is death”; “If Islam says it is done, then I am for it, if Islam says it is not done, then I am against it”… “We would have liked to hear you on these questions”, he throws, from time to time, in the direction of the box.

You have 52.55% of this article left to read. The following is for subscribers only.

One thought on “At the trial of the November 13 attacks, the math teacher and the terrorist’s “parcel of humanity””