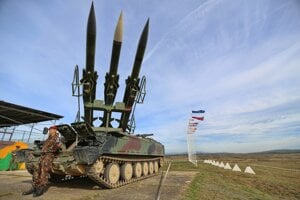 The party claims that this is an irresponsible step against Slovakia’s national state interests.

BRATISLAVA. Chairman of the extra-parliamentary vote and non-attached member of the National Council Peter Pellegrini he addressed a letter to the president Zuzana Čaputová. She asks the Constitutional Court to have her defense agreement with the United States assessed. The party’s spokeswoman Patrícia Medveď Macíková informed TASR about this.

“Hlas-SD insists that this is an irresponsible step on the part of the government against the national-state interests of the Slovak Republic. The government has ignored public debate and comments from constitutional bodies, professional institutions and the general public,” the spokeswoman said.

She added that, despite fundamental reservations, the government had approved the agreement as submitted by the other party, without requesting, from the position of a sovereign state, a change in the provisions defining the jurisdiction of the Slovak state authorities. The vote continues to refuse to support such an agreement.

Related article No base or loss of sovereignty. Questions and answers about the agreement with the USA Read

Several former politicians and lawyers have already addressed a similar challenge to the head of state. President’s spokeswoman Martin Strižinec he then responded that the head of state could, within the meaning of the constitution, submit a petition to the Constitutional Court only after the negotiation of an international agreement.

The opposition Smer also initiated an extraordinary meeting of the National Council on a proposal to call a referendum in connection with the defense agreement with the USA. It is called for Tuesday, January 18. In a referendum, Smer wants to ask citizens if they agree that parliament will give its consent to the agreement.

The government approved the conclusion of a defense cooperation agreement with the United States on Wednesday. Once the document is signed, it has yet to be approved by parliament. Ratification by the President is also needed.

The agreement would allow the US Armed Forces to use the Malacky-Kuchyna and Sliač military airports, or other agreed facilities and premises. It should be valid for ten years. It then remains valid or can be terminated with one year’s notice.