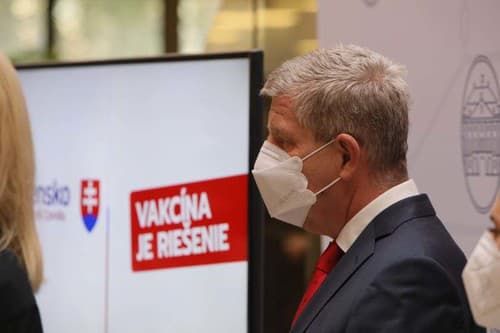 We know when the new measures, including the new OP + regime, will come into force. However, their end is questionable. Nationwide rules are being introduced in connection with the omicron wave. Some countries are already experiencing a rapid increase in cases. This is not the case in Slovakia yet, quite the opposite. The situation is stable and the numbers are falling.

The working estimate is two months

However, experts and the ministry estimate that its arrival will come soon and it will be fast. The established rules should then end four weeks after the peak of the wave. When it will be? The Minister of Health Vladimír Lengvarský stated in the press that the wave will manifest itself at the turn of the months.

“We expect the next wave of the omicron to be fast, its peak is expected at the turn of January and February,” confirmed health spokeswoman Zuzana Eliášová for Topky. “The exact time frame is difficult to define precisely – it will primarily depend on the evolution of the current epidemiological situation. The working estimate is approximately two months,” she added.

We are a specific country, anything can happen

Even the head of the Internal Department in the Hospital with the Považská Bystrica Polyclinic, Milan Kulkovský, does not dare to predict the course of the so-called omikron wool. “We are a very specific country and anything can happen. I just believe and hope that, despite the relaxation of measures for the most protected, the hospitals will not be filled, ” stated for Topky.

It may not end until Easter

“The number of hospitalized will indeed increase, but I am sure that there will be almost none of the OP + patients among the patients with a severe course. The peak should come in the second half of February,” he added. If it did not peak until the second half of February, four weeks would probably not be counted down until March. This Easter is coming out in mid-April. This regime would end just before her. The authorities do not yet know what will happen next.

The head of the Institute of Health Analyzes Matej Mišík stated that it is premature to talk about other rules, but they will evaluate the situation on an ongoing basis. Slovakia accelerated vaccination with the third, the so-called booster dose just because of omicron. Originally, the third dose was given to everyone after half a year, after the new dose it is given after three months.

The fourth dose? This is not being considered in our country yet

Also in the new measures is introduced a new regime of so-called OP +. This includes fully vaccinated, but must have either a booster dose, a negative test, or an overcome illness. Some states are already vaccinating with a fourth dose. However, the European Medicines Agency on Tuesday, she questioned the possibility of vaccinating the population with a fourth dose.

According to her, repeated administration of booster doses every few months would probably not be a sustainable strategy. At the same time, the EMA expressed the belief that the spread of the new coronavirus variant omicron is moving COVID-19 from a pandemic phase towards a persistent disease that humanity will be able to live with.

The Minister of Health also stated that the fourth dose is not being considered in our country yet. According to him, some countries did so because their revaccination with the third dose ended before Slovakia, ie a few weeks before the onset of omicron. “There are some countries that have given the fourth dose, such as Israel. It was because they have a lot of revaccination and some months have passed after the third dose, which is not true. We are now vaccinating with the third dose for the second or third month. I think that, given the situation, it is premature to talk about the fourth dose and we are not considering it yet, “ said Lengvarsky.

Many teachers will be positive for the spreading omikron variant and schools will not be able to provide full-time education. This was admitted by the Minister of Education, Branislav Gröhling, on Thursday. According to the head of the Ministry of Education, this situation will also occur in Slovakia, as it is also happening in the surrounding countries. “Maybe this will be the reason why school teaching will be interrupted,” he said.

At the same time, he believes that the situation with regard to the omicron variant will not be so bad that significant steps will have to be taken. “The fact is, omicron is coming. It’s really highly infectious, so a lot of people will be quarantined. We can’t avoid it.” the minister stated.

Gröhling and the Minister of Health will still discuss what caused the Christmas holidays and what will happen after the release of individual measures. Subsequently, according to the Minister of Education, further decisions will be made. He added that he is glad that not only political leaders but also experts assume that schools should not be closed in the next phase.

1 thought on “The new COVID manual for everyone: It can only end before Easter! The fourth dose is not considered yet – Topky”