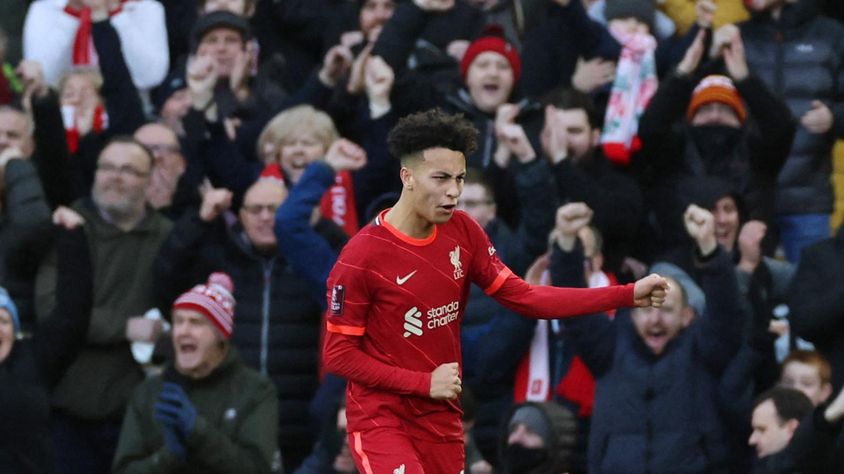 Shrewsbury led Anfield over Liverpool on Sunday after half an hour. The Slovak Marko Maroši (28) also tried to have a cup sensation in the goal of the third league player.

“If I kept zero to the end, with the last whistle, we would immediately become Shrewsbury legends. Maybe I would call Real Madrid, “he joked in an interview for ŠPORT.sk a native of Michalovce living in England since 2006. Liverpool turned the score 4: 1. Star Brazilian Roberto Firmino overcame Maroši with his back to the goal with a heel. A 3 – 1 hit in the 78th minute ended the hope of a great outsider.

You count on everything. But will it kill the heel?

Firmin’s goal was a hit on social networks. What did it do to you?

“Oh … The goalkeeper also counts on unorthodox solutions for him, but will it kill me like that?” Of that, I had a heart attack (laughs). But if there was no stopper among us, the whole situation would look different and maybe we would have lived on. ”

Is the goalkeeper preparing for an attacker like Firmino special?

“Before each match, we watch a video of selected players how they move, where and how they end. Firmino is specific, it has a wide range of offensive solutions. It only takes a fraction of a second, 30 centimeters of space, and you have a problem. He is often underappreciated in the presence of Salah, Mané and most recently Jota. He’s not a goalie like Harry Kane, but he’s sacrificing for Salah and Mane. ”

Has the match with Liverpool been your biggest in your career so far?

“Yes. Liverpool is an absolute elite. Still, we wanted to win if the opportunity arose. ”

And the ball? “The Reds” came in with Van Dijk, Robertson, Konate, Fabinho and Curtis Jones. The rest consisted of players from the reserve …

“Coach Klopp has shown respect for us. Two years ago, he also built a complete ‘béčko’ against Shrewsbury at home in the FA Cup. Now he had Van Dijk at the base, he pulled Firmin out of the bench. This is a difficult luxury.

Nevertheless, we were disappointed. We did not lose goals that could not be prevented. Liverpool didn’t break us, in short he played a lullaby and hit at the right times. In the third league, the opponent would probably not punish a momentary reduction in concentration from 100% to 95%.

Paradoxically, the biggest difference was not in the individual quality. The people of Liverpool played, thought and stomped like one. When we pushed Fabinha, he always had 3-4 opportunities to pass. When we push the midfielder in our league, he has one chance or kicks the ball forward. ”

VIDEO: Marek Maroši’s intervention was chosen among the four best in the 3rd round of the FA Cup:

Millionaires with us as equals. Van Dijk was ashamed

You started the match in the goal under the famous tribune The Kop. Did you run out of electricity during the anthem You’ll Never Walk Alone?

“The song was great, so were the fans. No swearing, on the contrary. They applauded when I went to the goal before the excavation. ”

Even though you broke an unwritten rule and switched sides before the excavation?

“Well, nobody does that in Anfield and in general in England. The home team almost always attacks the goal under The Kop in the 2nd half. But I asked the captain for a change, because the sun was shining directly in the eyes in the first half on the opposite side. ”

Didn’t Captain Van Dijk roll his eyes at what the third league player was inventing?

“Not at all, players of this caliber will not decide such a mess. These stellar multimillionaires treated us like peers. Van Dijk thanked me for the match at the end. He later came to our locker room and gave the jersey to our attacker. But not messy. He knocked decently and since the coach was analyzing the match with us, he didn’t even want to go down. He was ashamed of the field. But great guy, ‘calm down’, professional. ”

Klopp watched me warm up. Great!

And what about coach Klopp, who regularly goes to the area behind the players after the last whistle?

“I warmed up before the home goalkeeper and Klopp watched me closely, it was a great feeling. After the match, he shook my hand and blinked. I wanted to ask him for his cap, but I didn’t dare. Eventually, a teammate asked her and he got her. ”

Did you take a souvenir?

“I don’t talk to anyone very much after losing and I want to be in the locker room as soon as possible. But if Alisson caught, I would go for a jersey (laughs). I am convinced that this was not my last match at such a level. I am 28 years old, it is never too late. For the goalkeeper in particular. ”

Interview with Marek Maroš about the threat of injury from November 2020:

End in Coventry. I was in danger of losing my sight

Last year, you were a clear unit of second-league Coventry until a severe head injury in November. Why did you decide to go one league lower in the summer with a valid contract?

“After the injury, I couldn’t even drive, not train at all, due to a serious concussion. After a month of destruction, I prepared individually for a week, a week with the team, and I went to the match. The substitute goalkeeper got a covid, the coach needed his unit. The player never tells the coach that he does not want to board.

I convinced myself that I was ready. But I wasn’t. Physically or mentally. And far from it. Today, in the same situation, I would tell him to go catch the third goalkeeper. But then I decided to keep the team, even though I risked my health and my wife disagreed. Loyalty to the club is always required of players. In the summer, in return, I needed the club to be loyal to me. And it didn’t happen. Maybe I was naive. ”

“After an injury, I scored goals that I would not have scored before. They knew I was back soon, but they said, ‘Marko, you can stay, but the club is going a different way.’ They brought in a clever and experienced goalkeeper from Sheffield United and indicated to me that I would be second. I could have taken better money and sat on a bench, but that’s not my style. I took a step back to make maybe two forward in the future. ”

Do you still feel the consequences of the November 2020 injury?

“Nothing that would limit me. I’m lucky, because the doctors were afraid I would lose my sight. I have damaged nerves, I can’t feel the left half of my face – cheeks, lips, teeth. I have a titanium plate there. From the beginning, when I got the ball bomb on that spot, I caught my face to see if I didn’t look like Frankenstein again. The feeling in the face may return, but it doesn’t have to. Otherwise, I am fit, strong physically and mentally. ”

Slovak Marko Maroši regularly catches in the second English league: In Slovakia he has …

Fortuna League? I’m not defending myself

Marko Maroši has not received a single offer from Slovakia for many years in England. He has never caught here, he has one start for the under-21 national team. He does not avoid working under the Tatras.

“I am still Slovak. If a meaningful offer came up, I wouldn’t resist. However, I do not have contacts or an agent in Slovakia who would push me. In addition, I have been in England for 16 years. I have an English wife, a daughter. We make all decisions together and it would have to suit them as well, “Maroši told ŠPORT.sk.