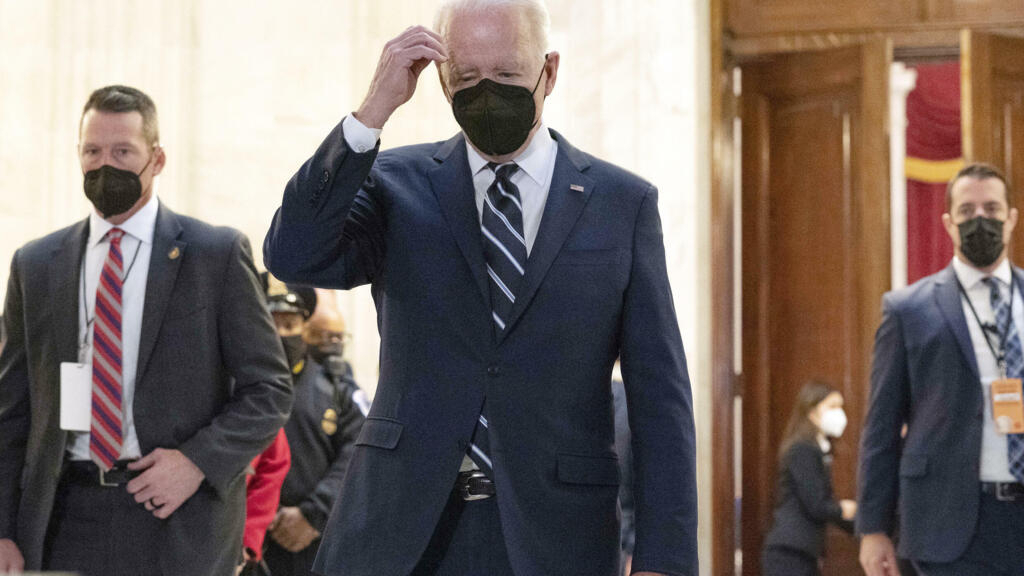 US President Joe Biden had to face two battles on Thursday January 14, trying to save his vast electoral reform from parliamentary wreckage after seeing the Supreme Court block his vaccination obligation in private companies.

Joe Biden facing the fragilities of his position. The American president was battling, Thursday, January 14, to save his vast electoral reform from parliamentary wreckage, after having seen the Supreme Court block his vaccination obligation in business, during a dark day which crudely exposes the limits of his power.

“I hope we get there but I’m not sure,” he admitted, visibly tense, about his big law to protect African Americans’ access to the polls.

He had moved, which is extremely rare, to the Capitol for a meeting with the Democratic senators, devoted to the project. “If we fail the first time, we can try a second time,” added the 79-year-old president, who continues to fight.

In the evening, he received Senator Joe Manchin and Senator Kyrsten Sinema, two moderate Democrats who are currently blocking the project.

The meeting, which lasted about an hour and 20 minutes and ended shortly before 7 p.m., was “a frank and respectful exchange of views on voting rights,” a White House official said.

Joe Biden, on the other hand, cannot do anything after the decision of the Supreme Court, which blocked his decision to impose either the anti-Covid-19 vaccine or regular tests in companies with more than 100 employees. He said he was “disappointed”.

The measure, dear to Joe Biden, was denounced as an abuse of power by elected Republicans. In a country where only 62% of the population is fully vaccinated, the issue reveals deep political divisions.

The high court has however validated the vaccination obligation for employees of health structures who benefit from federal funds.

This succession of bad news undermines a little more the political credit of an already very unpopular president and who has perhaps made too big promises, with too little room for maneuver.

Joe Biden has thus promised to protect access to the ballot boxes for minorities and the transparency of voting operations in the face of a multitude of reforms undertaken by conservative states, in particular in the south of the country.

NGOs assure that these measures adopted by Republicans particularly discriminate against African-Americans, who overwhelmingly voted for Joe Biden in the last election.

To block, the Democratic president wants to harmonize voting practices and give the federal government a say in local initiatives.

To pass this major reform in the Senate, it would theoretically require a majority increased by 60 votes. However, the Democratic camp has 50 votes plus that of Vice-President Kamala Harris, and the Republicans 50.

Unable to convince opposition senators, who are fiercely opposed, the Democrats have only one solution to save their project: break this parliamentary practice and force a simple majority.

But this maneuver was torpedoed first by Kyrsten Sinema. According to the Arizona senator, this strategy would only fuel the “infernal spiral of division”.

Joe Manchin, another centrist senator who once single-handedly blocked a massive $1.85 trillion social program from Joe Biden, said in a statement that he would “not vote to eliminate or weaken” the rule. increased majority.

The two elected officials are in favor of the reform itself, but have never made a secret of their attachment to the threshold of 60 votes – even in a political landscape polarized as never perhaps, where, after the tumultuous mandate of Donald Trump, partisan dialogue has become extremely difficult, if not impossible.

Without their voices, the reform is doomed.

This Black Thursday cruelly reminds Joe Biden that he has very little latitude.

He has to deal with a Congress that he does not really control, conservative states in open rebellion on multiple subjects (abortion, right to vote, health strategy, etc.) and a now very conservative Supreme Court, after the appointments made by Donald Trump.

In a few months, Joe Biden also risks losing any majority in Congress in the mid-term legislative elections. He would then be, in fact, paralyzed until the next presidential election.

1 thought on “United States: Biden weakened by the blocking of the vaccination obligation and his electoral reform”