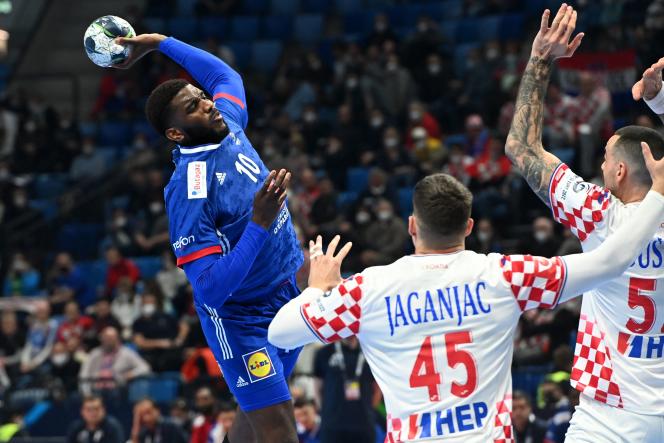 The French handball players ideally launched their European championship, dominating Croatia (27-22), Thursday January 13, in Hungary. At the end of a controlled match, the France team overcame an opponent like it weakened by a cascade of packages.

The confrontations between France and Croatia are no longer as epic as they were in the days of the “Bulky” and the “Experts”, but the rivalry between these two great handball nations remains strong. The atmosphere in the Pick Arena in Szeged was all the warmer as the Croatian supporters had come in large numbers – Croatia is a country bordering Hungary – and France had eliminated Croatia in the qualifiers for the Tokyo Games in March 2021.

“We started well, then we complicated the match with loss of ball. In goal, Vincent Gérard released a big game. We played smart on offense. All in all, we mastered this match well.”, France left-back Nikola Karabatic told BeIN Sports after the game.

A good start to the match the Blues

The main French satisfaction came from defence. Throughout the encounter, the players at the red and white checkerboard struggled to find favorable shooting positions. Alongside Ludovic Fabregas, Karl Konan, the left back of Aix, who is playing in his first international competition, was convincing.

He was eagerly awaited because he replaces Luka Karabatic, injured in the right thigh and forfeited for the Euro. Nikola Karabatic’s younger brother was a mainstay in the Blues defense during the Tokyo Olympics last summer.

Well helped by his two towers of defense, goalkeeper Vincent Gérard multiplied his prowess in the tricolor cages, with 14 parades. The doorman of Paris SG had however largely missed the preparation of the Blues due to a family drama before Christmas.

In attack Dika Mem, the Barcelona star, was a constant danger from 9 meters. Hugo Descat on the left wing was also effective. Both players finished as the game’s top scorers. Only downside, the relative weakness of the bench, the players who came into play on the French side had difficulty getting to the level of the holders.

The Blues had a good start to the match, led by a Dika Mem on fire. The Croatian defense taking on water, the coach of the red and white asked for a first time out after 9 minutes, while France led 7 to 2. After 15 minutes of play, the Croats had scored only three goals.

However, the tide would turn at the end of the first period when Croatian goalkeeper Ivan Pesic, future HBC Nantes player, won several head-to-head matches. The five-goal advantage had shrunk to two goals at the break.

On returning from the locker room, Mem and Fabregas allowed the Blues to regain a four-goal lead, forcing the Croats to try everything for everything by sacrificing their goalkeeper to play seven outfield players in attack. Long shots from the young Croat Tim Lucin hurt the French team and allowed the reds and whites to stay in contact with the French. A quarter of an hour from the end, the gap was only two goals (21-19).

But the match changed in stride in a few seconds, when the Croats were sanctioned with two temporary exclusions and a red card following an attack by David Mandic on Kentin Mahé. Bottles and lighters rained down on the floor of the Pick Arena, but the French kept their cool in the storm.

Thanks to this triple numerical superiority, they regained a four-goal lead in the fiftieth minute. 5 minutes from the end, the first goal of captain Valentin Porte (25-20), out of his quarantine after being affected by the Covid-19, definitively sealed the fate of the meeting.

“It’s a good first step, we have fully entered the competition. We were able to stay calm when it blew hard on the floor and in the stands. It was far from a perfect match, there were a lot of lost balls, but everyone had their part to play.”, said coach Guillaume Gille at the microphone of BeIN Sports after the meeting.

The French score two points and take the lead of their group tied with Serbia, winner of Ukraine 31 to 23, which they will meet on January 17th. Before that, they will face Ukraine on January 15, an opponent a priori of a lower level.