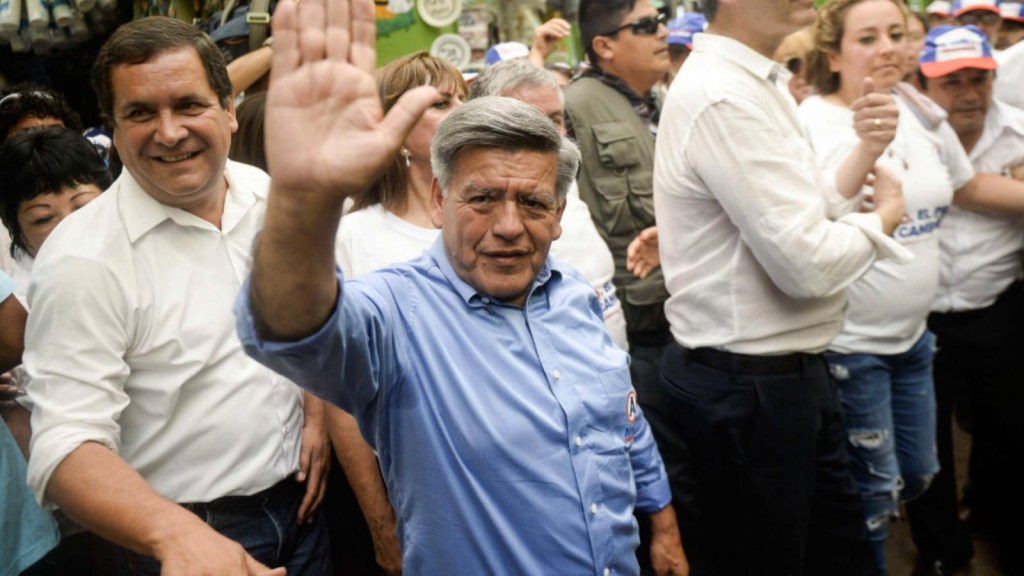 (CNN Spanish) — A judge sentenced Christopher Acosta, investigative journalist and author of the book “Plata como cancha”, and Jerónimo Pimentel, also a journalist and general director of Penguin Random House Peru, owner of the publishing house that published, to two years in prison for aggravated defamation. the book in February 2021.

The sentence, which was known in the first instance on Monday and has already been appealed by Acosta and Pimentel, has provoked the reaction of various institutions inside and outside the country. “Serious attack on press freedom in Peru,” he wrote. on his Twitter account on Monday José Miguel Vivanco, director of Human Rights Watch for the Americas.

The complaint against Acosta and Pimentel was filed by César Acuña, a politician, businessman, former candidate for the presidency of Peru, founder of three universities, a soccer club and the protagonist of the book “Plata como cancha.” About his book, which has been printed seven times and has just entered the printing press again, Acosta wrote Tuesday on his Twitter “We haven’t changed a single comma.”

#SilverLikeCancha has gone back to print. We haven’t changed a comma.

Regarding the content of the book, Enrique Ghersi, Acuña’s lawyer, told CNN that the facts “were investigated at the appropriate time by the Prosecutor’s Office and filed as no responsibility was found on the part of Mr. Acuña. Unfortunately the book does not realize that these events were investigated and archived.

Acosta, author of the book, told CNN that his work is “the profile of the public face of a power in Peru”, since according to him, César Acuña is “owner of one of the most important fortunes in the country, founder of his own political party and leader of a caucus of 15 congressmen in Parliament”. The author affirms that the book is “the journalistic profile of this person” and that it would reveal a pattern of conduct that could make him elude the investigations of the Prosecutor’s Office or the Judiciary.

Acuña’s lawyer, Enrique Ghersi, told CNN that the sentence does not imply any attack on freedom of expression because “the book has been sold from the beginning without any restriction. There has been no prior censorship, there is no restriction judicial or any de facto restriction on the circulation and sale of the book. This is not a case of freedom of expression, but of a crime against honor that exists in North American law and in Anglo-Saxon law and is known as libel”.

Roberto Pereira, Acosta’s lawyer, expressed through CNN a position opposite to that of Ghersi: “From the point of view of freedom of expression, taking into account the characteristics of the complaint that is directly aimed at affecting it by a high-profile public figure of power, is a kind of message for the rest of the press”. Pereira says that this would set a negative precedent if it is consolidated in the second instance: “The media will not be able to investigate high-profile public figures based on sources because they would be denounced and demanded to prove what qualified sources say.”

From Washington, the Organization of American States said in a statement on Tuesday that for the Office of the Special Rapporteur for Freedom of Expression, this judicial decision “is contrary to regional standards on freedom of expression, and generates a notable intimidating and self-censorship that affects not only those convicted, but the entire press and Peruvian society”.

There were also reactions from the Twitter accounts of the European Union in Peru, the UN, and the embassies of the United Kingdom and the United States. The latter said: “Freedom of expression, including freedom of the press as the basis of any democracy is one of the most fundamental rights of human beings.”

The National Press Association (ANP) and the Peruvian Press Council (CPP) questioned the ruling in a statement and said that under the judge’s reasoning, “a court can, without further motivation, determine which sources are valid and which are not.” , a criterion that is not only arbitrary, but also undermines journalistic work and the legitimate right of citizens to receive information of public interest”.

The Inter-American Press Association (IAPA) described the sentence as serious, and pointed out in a statement on Monday that this ruling affects freedom of the press while regretting that in Peru “demands from public figures and criminal proceedings continue to be used in against journalists as a way to stop the disclosure of critical and public interest information”.

Peru’s Ombudsman’s Office also criticized the ruling and posted on its Twitter account on Tuesday that it will file a second-instance appeal “in order to protect citizens’ freedom of information and the press.”

The judgment and its grounds

According to the judge who issued the sentence, César Acuña’s “honor and reputation” were damaged. On page 44 of the ruling it is read that in the book “facts have been attributed to the plaintiff, which turn out to be harmful to his honor and reputation, rights that in no way can be avoided under the pretext of freedom of expression.”

“The book is not defamatory,” Acosta told CNN, but rather “an investigation that collects several verifiable sources, such as tax and judicial files, congressional investigations, journalistic archives and interviews with the closest environment of the character such as his ex-wife, brothers and former employees. “.

For the author of the book, what worries him most about the sentence is that it makes him a “defamer” for something that journalists “always do, which is to cite sources.” “What the sentence does is transfer responsibility for having transcribed testimonies from sources that existed prior to the same book. If I transcribe a statement that appears in Congress files, that makes me a defamer. That is absurd, we journalists live by citing sources. In other words, the judge requires us journalists that we can only refer to events with criminal potential, as long as there is a judicial sentence. This becomes a penalty for the source cited.”

Ghersi, Acuña’s lawyer, told CNN that “the use of citations is not being penalized. The problem is that he has made an unfaithful report of the facts because he has not told the complete stories and has not corroborated the sources.” Ghersi added that the obligation of the journalist and author of the book “is not to prove what the source says, but rather the verisimilitude”,

Acosta maintained that Acuña has never sued those who, in the past, had already publicly stated what he cites in his book: “With this lawsuit he is trying to sanction the book as an object.” He added that “the lawsuit isolates some phrases of the book from their context and presents them as defamatory without allowing their evaluation as part of a story. I am sure that the judge has not read the book.”

Acuña’s version was not included in Acosta’s book, who assures that he asked for an interview on several occasions both through his son, Richard Acuña, and through Luis Valdez, a former congressman and head of his last presidential campaign. Acosta said he also asked one of Acuña’s universities for disclaimers on financial issues included in the book. For his part, Acuña said on Tuesday that none of the people Acosta pointed out told him that he wanted to communicate with him.

New downturn in sight in Europe as on Wall Street