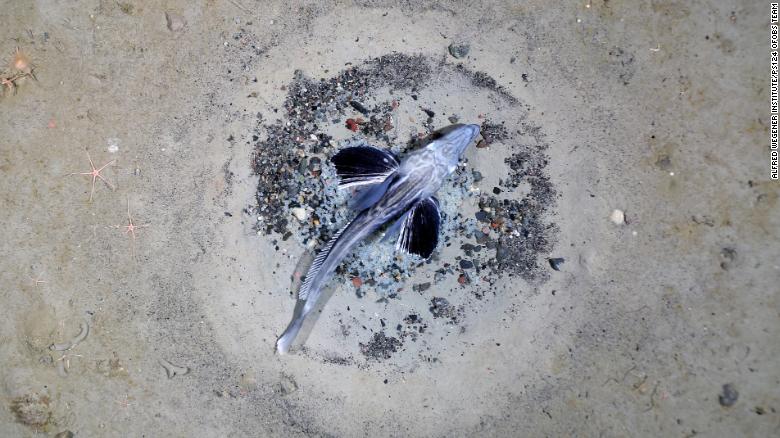 Fish fall from the sky in a rare weather event 1:43

(CNN) — A breeding colony of 60 million fish has been discovered in Antarctica’s Weddell Sea, a unique and previously unknown ecosystem that occupies an area the size of Malta.

The fascinating find shows how little is known about the deep ocean.

The vast colony, believed to be the largest in the world, is home to the extraordinary icefish or icefish (Neopagetopsis ionah), which has a transparent skull and blood. The ice fish is the only vertebrate that does not have red blood cells.

The discovery of icefish nests, Neopagetopsis ionah, came as a surprise.

To survive such low temperatures, he developed an antifreeze protein in his transparent blood that prevents the growth of ice crystals.

The breeding colony was discovered in February 2021 by the German polar research vessel Polarstern, which was surveying the seafloor half a kilometer below the ship using a car-sized camera system attached to the ship’s stern that transmits images on the cover.

The nests are evenly spaced on the seafloor.

The expedition was focused on ocean currents, so the discovery of the nests, separated from the seabed by a circle of stones, was a surprise.

“We saw one fish nest after another for four hours, and in that time we covered about six kilometers of seafloor,” explains Autun Purser, a postdoctoral researcher at the Alfred Wegener Institute in Bremerhaven, Germany. He is the lead author of a study on the icefish colony that was published Thursday in the scientific journal Current Biology.

“I’ve never seen anything like it in my 15 years as an ocean scientist,” Purser said. “After that dive, we emailed experts on shore who know about fish like this. They said yes, it was something unique.”

The seals that live in the area probably feed on the ice fish.

Four more camera dives revealed the spectacular extent of the colony, and its surprisingly uniform nature.

“This is an amazing discovery,” says John Postlethwait, a biology professor at the University of Oregon who studies these fish and was not involved in the research.

“It’s also significant. The magnitude of the biomass is, to me at least, unexpected. And the extent to which the fish change the bottom structure of the sediments creates (a) habitat for a community that moves up the food web to maintain a huge variety of species,” he added.

The colony covers more than 240 square kilometers, the researchers said. With an average of one nest per three square meters, they calculated that the colony includes about 60 million active nests.

Each of the evenly spaced nests was about 15 centimeters deep and 75 centimeters in diameter, containing an average of 1,735 eggs. Most were guarded by an adult fish. Some nests contained only eggs and others were unused.

The nests are guarded by an adult.

“Nest spacing is kind of like bird spacing on a phone line,” Postlethwait added by email.

“Some animals like to be social, but there is a limit. Banding together may give them an advantage in finding a mate, but it provides a fertile focal point for predation.”

The fish appear to be attracted to a zone of warmer water, which is about 2 degrees Celsius warmer than the surrounding seafloor, which is a cooler 0 degrees Celsius, Purser said. (Sea water freezes at a lower temperature than fresh water.)

Researchers have deployed two camera systems to monitor icefish nests until a research vessel returns. The hope is that the photos capture more details about the fish nest ecosystem.

One of the questions the researchers want to answer is how long adult fish guard the eggs – experts suspect it could be months – and whether it is the male or the female that watches.

“It appears that the reproductive behavior of most, if not all, icefish revolves around males courting females by building a good nest,” the fish expert says by email. of ice H. William Detrich, Emeritus Professor of Biochemistry and Marine Biology at Northeastern University. Detrich was not part of the investigation.

The findings reveal an ecosystem unique in the world, the researchers say, and they say it should be designated a protected area.

“The implications for the conservation of this species are clear: a marine protected area should be established in the Weddell Sea to prevent exploitation of this icefish species,” Detrich added.

The discovery was made by a team aboard the German polar research vessel Die Polarstern vor A74.

Although the Weddell Sea is covered in sea ice year-round, the ice is relatively thin, a meter thick, meaning photosynthesis is still possible and life can thrive. According to Purser, the bottom of the Weddell Sea is far from barren, as there are sea sponges, corals, octopuses and starfish on the seafloor.

About 2,000 seals also live in the area and they probably dive in the breeding area and feed on the ice fish, he said, although there is no definitive evidence.

Purser said that while there are species of freshwater fish that make similar types of nests, scientists have “never seen any colony like this in the deep sea.”

“I guess we’ve only recorded maybe 1% of the Weddell Sea floor, and who knows what else is lurking out there. I’m convinced there are a lot of gaps in our knowledge of the deep sea.”