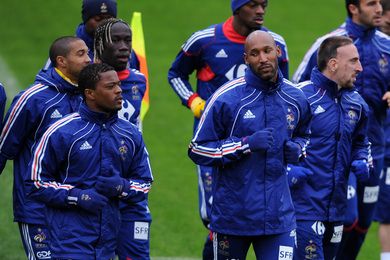 Almost twelve years after the events, Patrice Evra came back at length to the Knysna episode during the 2010 World Cup. The former left-back of the France team did not hesitate to charge Raymond Domenech, whom he considers the first person responsible for this sad event.

Evra and Anelka have not forgotten the 2010 World Cup…

Twelve years after the events, the vagueness still persists. Considered one of the most shameful events in the history of French football, the Knysna bus episode has long left its mark. In an RMC agreement interview on the sidelines of the release of his autobiography I love this game , Patrice Evra returned at length to this unfortunate passage.

The truth of Evra on half-time against Mexico

The captain of the France team during the 2010 World Cup first explained how the Blues got there. By recalling the quarrel between Nicolas Anelka and Raymond Domenech during half-time of the match lost against Mexico (0-2). Domenech waits a good ten minutes before speaking. Nico is retying his shoelaces and he says: Fuck you with your team, there’s no problem, I don’t play anymore. He (Domenech) didn’t even hear. I interfere. We can still qualify. I said : Stop your bullshit, we need Nico. I told Nico to put his shoes back on. I manage to convince him, Nico puts his shoes back on. And the other (Domenech) says: No, Gignac is heating up, it’s dead. We resume the second half with the head upside down. Nico felt attacked. I have such great respect for Nico, he never told me off , supported the ex-Manchester United player.

Evra also assured that his attacking partner wanted to make amends despite L’Equipe’s false front page the day after the match. I wanted to convince Nico to apologize. Nico told me: No worries, I apologize to the group and the coach, but I can’t do it in public. That’s not what I said and my lawyers are on it. I’m not going to publicly apologize for something I didn’t say. When they told me they were going to expel Nico, I said Domenech: This is going to be the biggest mistake, you are going to destroy this group, this group is going to go into a spin. He told me : OKAY. If he apologizes in front of the group and in front of me, no worries. , continued the 40-year-old man, who thought he had found the solution to the problem. Error.

Sarkozy behind the eviction of Anelka?

I went to Nico’s room to convince him. I ask where the coach is. They tell me they can’t find it. It’s as if he had disappeared. In my head, I tell myself that Nico is going to change his decision. And then there I go up and I see the quiet coach with Jean-Pierre Escalettes. They are laughing. I tell the coach that we’ve been waiting for him for an hour and that Nico is ready to apologize. The coach tells me: It’s too late, it’s over. Above is the President of the Republic. , told Evra, who however refused to cite Nicolas Sarkozy as the sole decision-maker for the dismissal of Anelka from the selection.

I’m not going to say it’s him, but when Raymond told me “it’s above”… You have to ask Henry, he’s the only one who spoke with the President. Guys, this is a political story. You don’t have to lie. France was in crisis, there was a strike against pensions… It was political. As Didier (Deschamps) always says, we fed the pigs , regretted the main interested party, who did not fail to charge the tricolor delegation. I asked how they could have let this article out. It was wrong. He (Domenech) told me he hadn’t even heard it. This is Raymond’s answer. We needed a scapegoat , ruminated Evra.

A series of bad news that put the tricolor group in a boil. When we see Nico dressed in civilian clothes with his bag… They cleared him like shit. I told the guys that we were going to have a meeting to say goodbye Nico. It was not to protest but to say goodbye Nico. Nico leaves. I tell the guys: You heard it, that’s not what Nico said. really hurt. We wish good luck Nico. What are we doing ? We start talking to each other. A young person from the group, whose name I will not give, then said: We are not playing the last game! I say : Warning. A World Cup is a childhood dream, we can’t do that, we have to find another solution. One says : OKAY. We don’t train, anyway it’s a sludge. We don’t need to practice. from there, we just wanted to protest , said the native of Dakar.

And to return to the bus strike. I have a meeting with Raymond and Abidal. ric, still calm, says: You disgust me with football, I’m ashamed of you, I don’t want to play anymore. I will never play for the France team again as long as you are the coach. I told ric to calm down so it wouldn’t fall on him. You can’t refuse to play for the France team, I tried to calm him down. I managed to calm him down. Raymond asked me what we were going to do. I said : We will never betray the group. But something is going to happen. , recalled the five-time Champions League finalist.

I didn’t tell him we weren’t going to practice. We get off, we go see the kids, we regroup, and we get back on the bus. The driver starts. And there Raymond sends someone to take the driver’s keys and confiscate them. We couldn’t go back. Raymond got on the bus afterwards saying: Want to make kids? And well you will see, it will fall on your face. When Raymond gets on the bus, I ask him if he can give me the paper so that I can read it in front of the press. I was gonna make the biggest mistake of my career , Evra said.

But Raymond says: No, I’m going to read this paper. You are a bunch of kids. The problem, when aat judged after the FFF, is that it is because of this paper that he was fired. By reading this paper, he was against the FFF , he assured, before feeding a single regret in this whole story. What I regret is not having thought my face. This is the only decision taken jointly by this group. I forgot my responsibilities as captain. I thought I couldn’t betray my band , Evra finished. Words that are likely to make a lot of noise…

What do you think of Evra’s comments? Do not hesitate to react and discuss in the area add a comment …

One thought on “French team: Anelka, Domenech, Sarkozy … The complete version of Evra on Knysna”