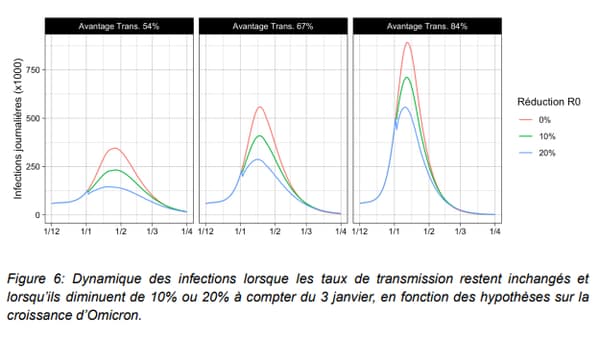 According to current models, the peak of Covid-19 contamination should be reached within a few days, for mid-January. But difficult to know how the epidemic will fall behind.

The number of Covid-19 cases continues to increase, with more than 360,000 new cases detected according to the latest report from Public Health France. But according to projections, the peak of infections of this fifth wave must be reached within a few days followed a week later by the peak of hospitalizations.

“As for the peak of infections, nationally it will be in mid-January”, explained epidemiologist Arnaud Fontanet on Monday on BFMTV / RMC.

“Peak hospital admissions expected in the second half of January”

Arnaud Fontanet specifies however that these estimates should not be understood to the day. Also, “be aware that there are regional differences, it will happen a little earlier in the Ile-de-France region and in the North-West of France, a little later in the South and South-East of France”, he declares.

“The peak of infections is expected in mid-January”, also writes the Institut Pasteur in its report on the impact of the Omicron variant on the epidemic, on January 7. And “in all scenarios, the peak of hospital admissions is expected in the second half of January, with a maximum impact on bed occupancy at the end of January-current February”.

The epidemiologist then evokes “between 2000 and 5000” admissions per day for cases of Covid-19, a period which will be “really difficult for the hospital”. The most likely scenario for the Institut Pasteur is also a peak of between 5,200 and 2,500 hospitalizations per day. Under the worst of their assumptions, however, this figure climbs, with estimates between 6,400 and 11,000 daily patients.

Then “the prospect is that in February, the number of contaminations drops considerably, and we hope in March, that we have arrived at much lower levels”, declares Arnaud Fontanet.

And after the peak, the descent?

But what remains difficult to predict at present is the continuation of this peak. In the London area, the virus, “after having had a very strong increase, a very strong wave, began to drop, and in a very strong way, which we had also seen in South Africa”, explained Monday the Minister of Health Olivier Véran heard in the Senate.

“The models show in fact that the Omicron wave is a wave which is shorter than the previous waves, and also a wave whose descending phase will be faster”, explained on our antenna this week Yves Coppieters, epidemiologist and professor of public health at the Université Libre de Bruxelles.

The Minister of Health remained very cautious about this, stating that “we will see in the next few days if, like the English, we reach a peak and then if that leads to a drop, or if it makes like Delta a plateau, this which would obviously not be happy news”.

As the Institut Pasteur indeed recalls in its models, “the spread of the SARS-CoV-2 virus is difficult to anticipate, and the dynamics of the epidemic can change quickly”. “There are none of the waves which are the same as the previous one, which makes the predictions random”, also recalled on BFMTV Frédéric Lapostolle, emergency doctor at the Avicenne hospital in Bobigny (Seine-Saint-Denis).

1 thought on “Variant Omicron: when will this fifth wave peak in France? – BFM TV”