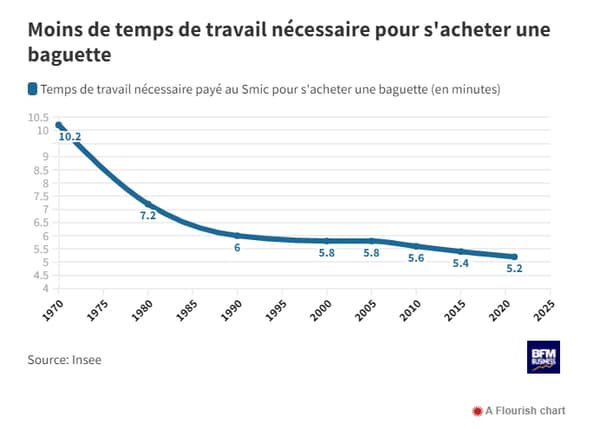 Large volumes of purchases, reduced payroll and above all almost zero margin when the bread is not sold at a loss. Mass distribution uses bread as an image product and this is nothing new.

“He wants to make us look like thieves.” The boss of the Bakery Confederation Dominique Anract is very upset against Michel-Edouard Leclerc’s 29-cent baguette.

With his announcement of the baguette sold for less than 30 cents, Michel-Edouard Leclerc succeeded. For two days, his operation has been on everyone’s lips. And the controversy swells. “It’s a political and demagogic coup”, denounced this Thursday on BFMTV Christiane Lambert, president of the National Federation of Farmers’ Unions (FNSEA).

“If he allows himself to sell it for 29 cents, that means that when he sells it for 60 or 70 cents, he makes a lot of money. […] He also despises the work of his employees because suddenly, they work for nothing “, deplores Christiane Lambert.

In France, according to INSEE, a 250 gram baguette is sold for an average of 90 cents. A slightly higher price but not enough to jeopardize the purchasing power of the French. Moreover, still according to INSEE, bread has never been so accessible in France. While it took 10.2 minutes of work for an employee paid at the “Smic” in 1970 to afford his baguette, this time in 2021 is only 5.2 minutes.

In a context of soaring raw materials with a price of common wheat which has taken 36% in one year, energy 15% and packaging 20%, bakers are often forced to increase their prices so as not to sacrifice their margins .

Not the large distribution which does not earn money with the bakery. According to a calculation of 60 million consumers, when an artisan baker generates a pre-tax margin of around 12 cents on a baguette at 90 cents, a supermarket chain would lose 1 cent per baguette sold for 50 cents on average. Calculation which was also carried out before the recent surge in raw materials.

“It’s a loss leader among others for them, summarizes Dominique Anract. They crush everything anyway: the price of flour, the price of bread, the salaries of their employees…”

If Leclerc’s operation goes badly, it is nothing new in fact. On Instagram, Michel-Edouard Leclerc also denounces the hypocrisy of those who fuel the controversy.

“It’s been more than a year since the 1st price white baguette has been sold (without problem) between 0.24 and 0.32 euro in E.Leclerc centers, but also in competing stores, he says. A sign has d elsewhere made a national operation at 0.29 euro a few months ago, without the FNSEA finding fault with it.”

The retail specialist Olivier Dauvers also qualifies this price of 29 cents as “ordinary” for a baguette in supermarkets.

In 2011 already, Lidl had aroused the ire of the bakers of Doubs by communicating on a baguette sold for 29 cents. “They are killing the profession”, was alarmed then in Eastern Republican a baker who organized raids in Lidl stores against “low-cost bread”.

55% of bread sold in bakeries

Is the bakery likely to suffer from this bread price war?

“Not the big ones but the small ones in the villages that certainly sell no more than 300 baguettes a day, apprehends Dominique Anract. If Leclerc “takes” 100 or 200 baguettes from them a day, it can be difficult.”

The bakery sector is paradoxically doing quite well despite soaring costs and competition from large retailers. Although the number of bakeries fell sharply between 1990 and 2010, it has since started to rise again. To date, the country has 33,000 bakeries which generate most of the bread sales.

In 2021, bakeries made 55% of bread sales in the country, ahead of baking terminals (the “bakeries” which do not make their own dough) with 35% and mass distribution at 10%.

1 thought on “How E. Leclerc can sell a baguette three to four times cheaper than the baker – BFM Business”