Vlhová brightened Slovak fans again: She fulfilled the first goal, the second is in line – Športky.sk

BRATISLAVA – Last year she lost a small crystal globe at the last possible moment, now she got it in January – nine weeks before the final event of the World Cup and almost a month before the start of the long-awaited Olympics in Beijing.

Already in the traditional glacier overture in Sölden, Austria, we could not fail to notice that a huge dose of relaxation and well-being, which we were not used to last season, is pouring out of Petra Vlhová’s skiing and overall speech.

Maura Pini’s protégé skis with great confidence and ease, she dances between the gates with surgical precision and she is not even surprised by the occasional flaw of beauty from her perfect mental setting. On the contrary, he will learn from it and move on.

She is also used to situations where she closes the second round and confirms her leading position and winning ambitions on a broken track and against a heap of motivated opponents. However, critical moments do not throw her away, but strengthen her. She managed them with stoic peace, almost as much as her great rival Mikaela Shiffrin.

“This year I am very balanced, I feel at ease, I have a great team and a great coach and I am happy.” she said at the finish line in Schladming shortly after definitively sealing the profit of her second small globe for slalom in her career.

She became a woman

Out of the fourteen laps in the slalom so far, she managed to control nine. Petra Vlhová’s seasonal score is really famous – five victories, two second places and 660 points in the slalom rankings and the overall World Cup standings.

In it, the 26-year-old Slovak woman has approached the reach of her American peer, currently losing only 55 points and although our best sportswoman and team have been repeating since the opening races of the season that the main priority is the Beijing Olympics and defending a big crystal globe is not the topic, to be more and more realistic that after the February Olympic adventure in the most populous country in the world – whatever happens – an attack on the most valuable trophy in the World Cup will still be possible on the table. 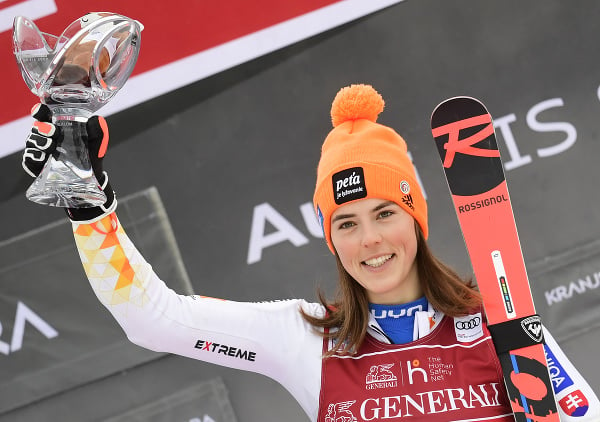 However, the slalom championship will no longer be taken away from her. After two triumphs in Levi, victories in Lienz, Zagreb and Kranjska Gora, as well as two silver medals in Killington and Schladming, he has an unrivaled 220-point lead at the discipline.

Only six competitors have more overall championships in the most spinning discipline than Petra Vlhová – absolute recorders Mikaela Shiffrinová and Vreni Schneiderová (both 6), Marlies Schildová and Erika Hessová (both 4) and also Janica Kosteličová with three small globes.

“Hats down in front of Petra. Compared to the past, she is more mentally resilient, she handles complex situations very well. She has become a woman. I have no words, it’s amazing.” Veronika Velez-Zuzulová did not spare words of praise in the live broadcast of RTVS.

Another slalom gala performance was born on the Planai hill, which will forever be written in the history of alpine skiing. Three ladies fought their way to the stage of the night event in the iconic center, where men regularly run, who had no reason to be dissatisfied with the achieved result.

German Lena Dürrová finished third, who followed up on successful performances in Levi, where she also took the bronze medal. She must have been even more moved by the kind historical connection with the greatest life success of her father and former skier Petr Dürrer, who stood on the crate for the first and last time almost a quarter of a century ago. It happened on the ski slope in Schladming. 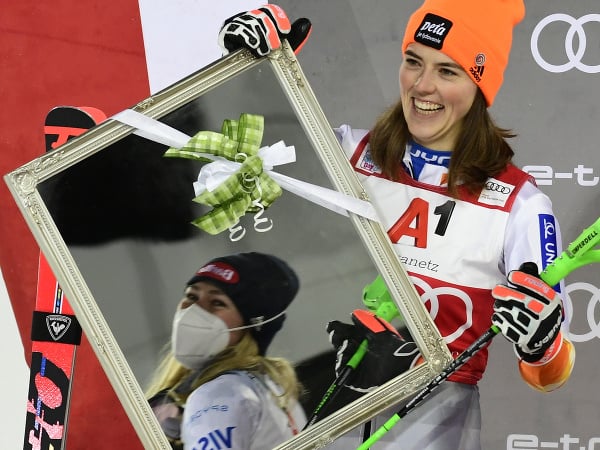 But it was Mikaela Shiffrin who was overcome by the strongest emotions shortly before ten o’clock in the evening. Not only did she break the venerable record of Swedish great Ingemar Stenmark, but the unique success of the American machine is underlined by the fact that the historic slalom victory with serial number 47 came on the legendary slope where her phenomenal career started nine years ago.

No wonder the sympathetic blonde just stood there for a few seconds and tore a sea of ​​tears as she leaned against the barrier. Not only were thoughts of historical records swirling in her head, but she certainly remembered what she had been through in recent weeks and how difficult it was to break Petra Vlhová’s growing dominance.

“Schladming, last night was a privilege for me. Thank you for her! Father, I hope you had a good view up there. Mom, your strength, love, support and faith in my abilities are the most valuable treasure I can have. “I also thank my team for standing by me for two years and giving me this beautiful gift so that I can continue to fight.” wrote the three-time winner of the big crystal globe on her Facebook and at the end of the emotional post she did not forget to praise the Slovak star.

“Petra, she looks great at your slaloms. Congratulations to you and your team on winning the globe,” added Shiffrin, who achieved a record 47 victories in just 8 years, almost twice as fast as the Scandinavian phenomenon of the 1970s and 1980s.

“What Mikaela has achieved, you are I don’t think anyone will overcome it for a very long time. I will try to get closer to her, but she is an amazing athlete. We have been together all our lives, we have been competing since we were students. For me, it is an honor to ride in her era. We help our sport a lot. We are pulling each other and it is a big fight between us. Once it comes out one and the other. That’s why the sport is so beautiful, “ Liptáček reacted.

Shiffrin’s rivalry with Vlhová has long outgrown the dimensions of downhill skiing.

In the period from Levi 2018 until Tuesday evening in Schladming, 31 World Cup slaloms took place, and only in sixteen of them did the names of the Slovak-American superduo stand out in the first two places. Petra won in six slaloms, Mikaela succeeded ten times.

The fights of this phenomenal pair adorn not only the snowy slopes, but practically the entire women’s sport. However, it wasn’t so long ago that the native of Vail only looked into the eyes of victories and could only lose to herself and after a fatal mistake. The question before the slalom was not whether she will stand on the top step, but who will complete it there and win by how many seconds.

However, the era of Mikaela Shiffrin’s incredible dominance was broken by the penetration of Petra Vlhová into the absolute world top.

“I remember Petra in the European Cup, where Mikaela also competed. Petra had worse results at the beginning, but she already had the goal to compare and defeat her. This fight has been going on for several years and it’s amazing. It’s proof of that. that the human body does not know the limits and these two women only confirm this. Both are great athletes in body and spirit, they try to do everything perfectly and they give their best in this sport. They move forward with each other. “ said Velez-Zuzulová after Tuesday’s slalom.

We are on one wave

Her new coach Mauro Pini is also brimming with satisfaction with the balanced performances of the Athlete of the Year in Slovakia. He replaced Livio Magoni, who led our icon to win a big globe for the overall World Cup champion.

The Swiss expert has coached two big globe winners in the past – Lara Gut-Behrami and Tina Maze. In addition, he collaborated with the Spanish Maria Contreras and the Swiss men’s national team. In recent years, he has worked as a ski expert for RSI television and has led the race at Airola.

“I’ve been following Petra for the last four or five years. For me, she’s definitely one of the best skiers in the history of the sport,” he paid tribute to his trustee in an interview with RTVS.

He praises the initial year of mutual cooperation. The team has a working but good mood, communication has improved and the significantly more positive atmosphere is also reflected in the performances and results of the six-time medalist from the world championships.

“We came to Schladming and Peter wanted to work right away. She immediately immersed herself in the next races. It is fantastic for me as a coach to work with such an athlete, because I am the same. The coach must be set up the same and we are on the same page. Each of us. looks to the same goal, ” added Mauro Pini.

They have already met the first goal this winter, the second is in line. The Olympics in faraway China will take place from February 4 to 20, and Petra Vlhová will be one of the main aspirants for precious metals.

Previous articleCovid, unvaccinated 76% hospitalized between 5 and 18 years
Next articleFabio Volo: “A new life is a different way of thinking and seeing things”

This is how they celebrate LGBTQ pride month in...