The proposal envisages a significant increase in funding for arms supplies.

WASHINGTON. A group of congressmen from the US Republican Party presented a bill that would “significantly and immediately” increase military support for the Ukrainian armed forces, including funding for armaments and training. Under this law, Ukraine would become part of “NATO plus”.

TASR obtained this information from Interfax on Tuesday.

Michael McCaul, the initiator of the bill and the Republican’s representative on the House Foreign Affairs Committee, said, according to the Voice of America radio station quoted by Interfax, that “diplomacy has little chance of success if it is not approached by force … (Russian President ) Vladimir Putin should take into account that Congress will not tolerate a renewed sphere of influence in Russia and will not allow us to give up Ukraine and our other NATO allies and partners in Central and Eastern Europe. “

Related article The Russians are talking about betrayal, but the West has never promised that NATO will not go east Read

According to the Voice of America, a bill to guarantee Ukraine’s independence by strengthening its defense (GUARD Act) will provide Ukraine with the military and diplomatic support it needs in the face of a concentration of Russian military force on its borders.

The bill also envisages the immediate imposition of sanctions on the Nord Stream 2 pipeline so that it never operates.

The co-authors of the bill are members of the House of Representatives Mike Rogers, Mike Turner and Elise Stefaniková.

The bill envisages a significant increase in funding for the supply of deadly weapons to Ukraine, in particular anti-aircraft and anti-ship weapons, which Ukrainians need to detain Russia. 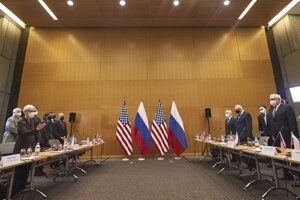 According to Rogers, the bill makes it clear that Putin’s demands, such as the right of veto and state accession to NATO and the moratorium on the deployment of medium-range missiles, are unacceptable and contradict the interests of the United States in its own security.

Ukraine must be free to decide on its future, including economic relations and security, without fear of retaliation, Stefanikova said.

Interfax clarified that the bill also designates Ukraine as a member of NATO plus, so that the sale of certain US defense goods and services can be urgently considered.

At the same time, the document rejects the Russian Federation’s proposal to establish a moratorium on the deployment of medium-range missiles in Europe and calls on the United States to officially determine whether Russia is a terrorist-sponsoring state.

In addition, the petitioners envisage allocating $ 155 million to Radio Liberty Europe / Radio Liberty. This funding, earmarked for 2022, is intended to combat “Russian disinformation and information operations” in the countries of the former Soviet Union.

New: Receive notifications of new articles in the topic you follow by email. Try the new feature and turn on the subscription.

Previous articlePresidential 2022: “rise of hatred” against elected officials denounced to the Assembly, Mélenchon retoked on sponsorship … The political recap of the day – Le Monde
Next articleCovid Italia, the latest bulletin

New evening event this Thursday, May 19, 2022. After a remarkable passage on the Croisette for the Cannes Film...

If anyone felt that the premiere of the film Top Gun, even with the presence of the French squadron,...

Zapping Eleven World TOP 10: The most profitable transfers in historyIt is now imminent. After long months of...

More and more hot in Italy with the African anticyclone Hannibal, with the weekend that will be scorching with...

If anyone felt that the premiere of the film...
World