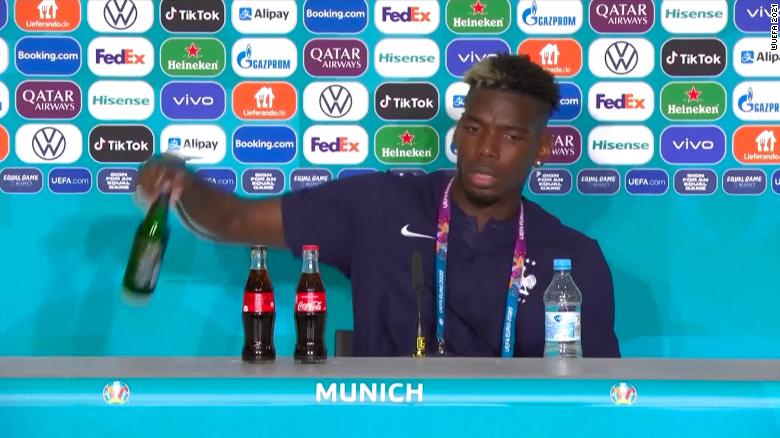 (CNN) – Some of the brands sponsoring Euro 2020, the international soccer tournament taking place in Europe, are having a hard time.

First was Cristiano Ronaldo with two bottles of Coke, then it was Paul Pogba with a Heineken.

Before Portugal’s game against Hungary, Ronaldo looked away from the two drinks on display as he sat down to answer questions from the media. He then took a bottle of water, saying “Water!” Apparently encouraging people to drink it instead of the soda.

Then, following France’s 1-0 win over Germany on Tuesday, Pogba, who was named man of the match, removed a bottle of Heineken non-alcoholic beer that was placed in front of him.

Pogba said on Twitter in 2017 that he doesn’t drink alcohol. Both Heineken and Coca-Cola are official sponsors of Euro 2020.

Pogba, who started in France’s 1-0 win against Germany, removes a bottle of Heineken during a press conference.

Coca-Cola said it would not comment on Ronaldo’s recall of the bottles when contacted by CNN and pointed to a statement from UEFA, the governing body of European soccer.

“Coca-Cola offers a range of beverages to suit different tastes and needs, which are available to players throughout the tournament,” says the UEFA statement.

“This includes waters, isotonic sports drinks and juices, coffee and tea, as well as Coca-Cola. Players are offered water, along with Coca-Cola and Coca-Cola Zero Sugar, when they arrive at our press conferences and can choose their preferred beverage.

In a statement to CNN, Heineken said: “We fully respect everyone’s decision when it comes to their beverage of choice.”

UEFA did not respond to CNN’s request for comment.

Ronaldo did not seem to be happy with the two bottles of Coca-Cola on display during his press conference.

Ronaldo, who scored two goals in Portugal’s victory against Hungary (3-0) and became the highest scorer in the history of the Euro Cup finals, caught the attention of Tampa Bay Buccaneers quarterback Tom Brady, after snubbing the Coca-Cola bottles.

“It’s almost as if the veterans know what they are doing,” wrote on Twitter Brady, who has advocated drinking at least half his body weight in ounces of water a day.

Pogba’s agent declined to comment when contacted by CNN. Ronaldo’s representatives did not immediately respond to a request for comment.

– CNN’s John Sinnott and Aleks Klosok contributed to this report.