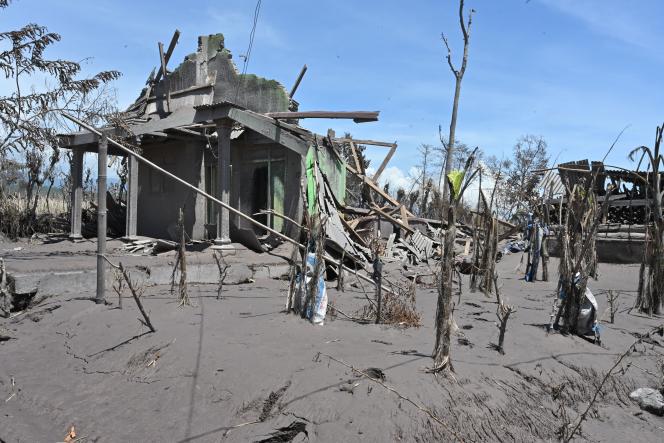 The eruption of the Semeru volcano caused the death of at least 34 people, announced Tuesday (December 7th), the Indonesian disaster management agency, urging Joko Widodo, the president of this Southeast Asian archipelago, to go there. Semeru, highest peak on the island of Java, woke up on saturday, projecting clouds of ash which were transformed with the rain into waves of burning mud, devastating a dozen surrounding villages and causing the population to flee. Abdul Muhari, the agency’s spokesperson, said seventeen people were missing, according to Agence France-Presse (AFP).

Read also On the island of Java, the spectacular and deadly eruption of the Semeru volcano

The rash also left dozens of people injured, most of them with burns. Entire streets were buried in piles of gray ash and mud, covering trucks or houses up to the roof.

The village of Curah Kobokan, the closest to the crater, was devastated by burning ash which killed many residents. “I am traumatized, I asked my relatives if they had the courage to return to Curah Kobokan and they told me no, that they preferred to sleep under a tree”, said Marzuki Suganda, a 30-something who worked at a sand mine in the area. “When the rash happened, I really thought we were going to die there. “

Rescuers are working under difficult conditions to search for survivors and bodies. They called in dogs to help them. Their efforts are slowed down by the threat of the volcano, the instability of the ground and the rain which can carry debris.

The volcano shows intermittent activity, with several eruptions every day of lesser magnitude since the weekend. More than 3,500 residents had to be evacuated. Thousands of homes and buildings were damaged, including 24 schools, according to provisional data from the Association of Southeast Asian Nations Humanitarian Assistance Coordination Center (AHA) (Asean). Authorities have asked residents not to approach within five kilometers of the crater, as the air saturated with ash dust in the area is dangerous for vulnerable people.

Read also In the Canaries, the eruption of the Cumbre Vieja volcano causes the confinement of 3,000 people

The Indonesian president has pledged that the government will help relocate those who can no longer return to their homes due to the risk of an eruption. “I hope that, when things calm down, we can repair the infrastructure and consider the possibility of moving housing from areas that are considered dangerous”, he said, estimating that around 2,000 homes are affected.

The Semeru, which rises to 3,676 meters, has known many eruptions in recent decades, but rarely so destructive. Indonesia is located on the Pacific ‘Ring of Fire’, where the meeting of the continental plates causes high seismic activity. The Southeast Asian archipelago has nearly 130 active volcanoes.