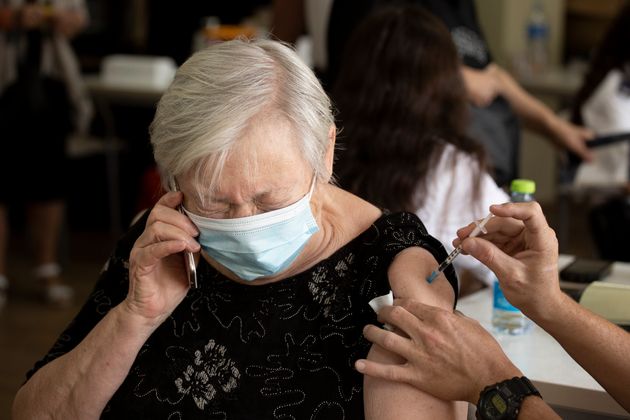 Who are the people who can be vaccinated without an appointment (illustrative photo taken during a booster vaccination against Covid in Israel, August 4, 2021)

CORONAVIRUS – Priority to the most fragile. Between the 5th wave of coronavirus, the end of year celebrations approaching, and hospitals which “are starting to mount under pressure” according to the Prime Minister, the government is simplifying access to vaccination for the most vulnerable.

During a press conference on Monday, December 6, Jean Castex warned against a virus that “circulates quickly, in all territories and all categories of the population”. It is therefore necessary to “amplify and strengthen our vaccine shield”, he added.

“We see that, after 5 to 6 months (after the last injection, Editor’s note), the risk of being hospitalized starts to increase again, especially in the elderly and frail”, explained Jean Castex.

Thus, to avoid a catastrophic scenario, people over 65 will be able to be vaccinated without appointment as of Tuesday, December 7, regardless of their vaccination center, announced the Prime Minister.

People over 65 will have four times the protection after being recalled.
Their risk of being hospitalized will be 20 times lower than those who are not vaccinated.
→ They will now be able to obtain their recall, including without an appointment, regardless of their center.

With this same objective, the government had already launched on December 3 a toll-free number reserved for people aged 65 and over, to help them make an appointment without going through Doctolib.

Jean Castex welcomed the vaccination figures in France, where around 500,000 people per day receive an injection. The recall campaign is also in full swing, with more than 10 million injections performed.

However, its opening to all has not been without resurfacing old problems: the risks of dose shortages have been mentioned by some mayors, or the difficulty of finding a niche, which makes some fear losing their health pass. Faced with these concerns, the citizen platform Covidlist has resumed service. The Ministry of Health assures him that there is no “logistical difficulty” likely to slow down his campaign.

See also on The HuffPost: Covid: The variant discovered in South Africa worries researchers but your priority is elsewhere

1 thought on “Covid: Who will be able to get vaccinated without an appointment – The HuffPost”