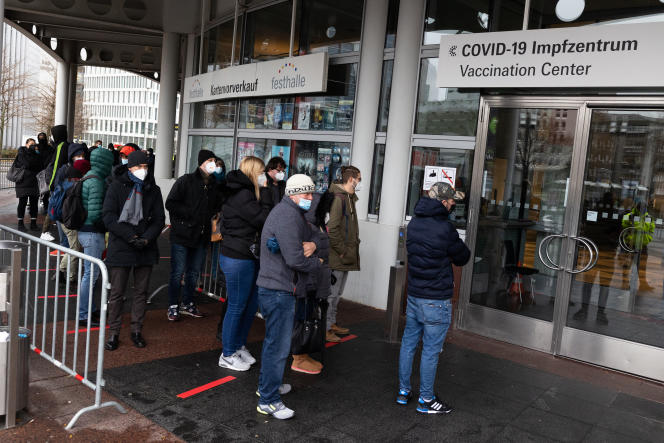 Vaccination against Covid-19 could become compulsory in Germany: this is in any case the wish expressed by the future Chancellor Olaf Scholz, Tuesday, November 30, during a video conference in which Angela Merkel and the heads of the sixteen Länder of the country participated. .

Asked by Bild TV after this meeting, Olaf Scholz said that a text proposing compulsory vaccination against Covid-19 would be examined by the Bundestag before the end of the year for entry into force “Early February or early March”. Politically important precision: he wants this text to emanate from Parliament and not from the executive, and that each deputy votes “According to his conscience”, in other words without group discipline. “I propose that it is not us who take the initiative as a government because it is a matter of conscience, but rather that it is the deputies themselves who present one or more proposals to fix the news. rules “, explained the future social democratic chancellor (SPD).

Like Angela Merkel, whom he will succeed as head of government in the week of December 6, Olaf Scholz had until now opposed vaccination against Covid-19 becoming compulsory in Germany. Asked about his turnaround, he justified himself as follows: “We have always bet on the fact that the greatest number would be convinced. If we had 80% of the population already vaccinated, or even more as is the case in other countries, the situation would be different and I would not have changed my mind. “

Read also Article reserved for our subscribers Covid-19: At the Munich hospital, “we are prioritizing patients, tinkering right to left”

With 68.5% of its adult population fully vaccinated, Germany is within the European Union average, ahead of the countries to the east of the continent but behind Portugal, Spain, Denmark and Belgium. , the Netherlands, Italy, France or Sweden. While the incidence rate exceeds 450 cases per 100,000 inhabitants, its hospitals are today on the verge of saturation: in intensive care units, barely 10% of beds are still available, and in recent days, the he air force is mobilized to transfer patients from one Land to another for lack of space in the establishments of their region of origin. Unheard of since the start of the pandemic.

The proportion of Germans declaring themselves in favor of such a measure rose from 33% to 69% between mid-July and the end of November.

Faced with the worsening health situation, calls to make vaccination against Covid-19 compulsory have multiplied in recent weeks across the Rhine. Public opinion on this point has, moreover, changed markedly. According to the ZDF political barometer, the proportion of Germans declaring themselves in favor of such a measure rose from 33% to 69% between mid-July and the end of November. A spectacular leap in a country traditionally attached to freedom of choice in terms of vaccination, as the heated debates sparked by the government’s decision at the end of 2019 to make the measles vaccine compulsory.

You have 30.02% of this article to read. The rest is for subscribers only.

1 thought on “Covid-19: in the face of the worsening health situation, Germany is moving towards compulsory vaccination – archyworldys”