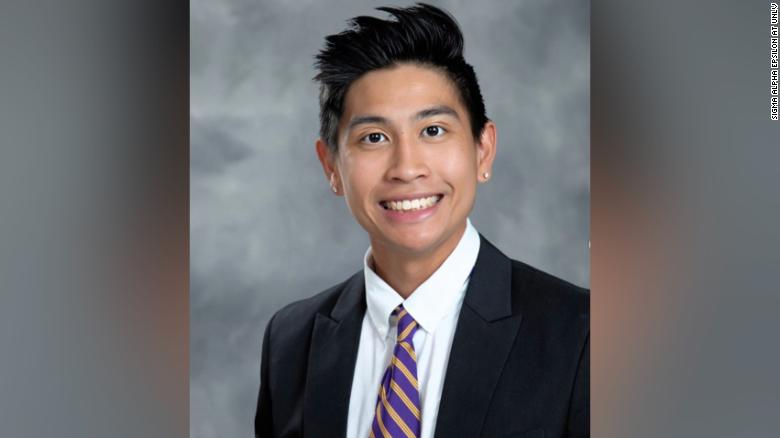 (CNN) – A student at the University of Nevada, Las Vegas, died just days after participating in a charity fraternity boxing match. The young man collapsed shortly after the fight, according to university statements and his family’s lawyer.

In what the school described as “a tragic incident,” 20-year-old Nathan Tyler Valencia died on Tuesday last week, four days after participating in the Kappa Sigma fraternity “Fight Night” on November 19.

According to an online flyer for the event, Valencia was one of the fighters who participated in the “main event” of the undercard. However, the family’s attorney Nick Lasso told CNN on Sunday that the kinesiology student had no boxing experience prior to participating in the charity fight off campus.

Valencia collapsed “shortly after their fight,” according to an online letter to the campus community from UNLV President Keith Whitfield.

He was hospitalized after his collapse and died on November 23, just four days before his 21st birthday, according to Lasso.

Valencia’s official cause of death has not been disclosed. However, doctors determined that he suffered internal bleeding at some point during his hospital stay, according to CNN affiliate KTNV.

“The Kappa Sigma fraternity is very saddened by the loss of Nathan Valencia at the University of Nevada, Las Vegas,” fraternity executive director Mitchell B. Wilson told CNN in an email Sunday. “Our condolences, thoughts and prayers go out to the Valencia family and the entire UNLV community.”

Valencia was a member of the UNLV Sigma Alpha Epsilon fraternity and not the Kappa Sigma organization that organized the event, according to Lasso.

Fraternity organized the fight in which the student died

According to an online flyer for the fight, the event was a fundraiser for Center Ring Boxing, a Las Vegas-based organization that establishes youth boxing programs for area children and their families.

In a statement to CNN, Lasso said his law firm will conduct “a full investigation” into the promotion, security protocols, arbitration and medical oversight of the November 19 event held in Valencia’s hometown. Las Vegas.

KTNV said the Las Vegas Metropolitan Police Department opened an investigation into the incident. Police did not return a call from CNN Sunday night.

“The Valencia family is heartbroken over the loss of Nathan … College students should not be placed in a situation where they face each other for combat,” says statement by Lasso and Ryan Zimmer of the Richard Harris law firm. . “The family wants to make sure this never happens again, that’s the main focus,” Lasso told CNN by phone Sunday.

“We are shocked and heartbroken as we mourn the loss of one of our own,” Whitfield said in her letter to the UNLV community. “Our condolences to his family, friends and loved ones. I am sure words cannot describe his feeling of pain and emptiness,” added the school president.

A vigil for Valencia was held on the UNLV campus on Saturday night.

“He was the best person anyone could ask for. I don’t wish this on anyone,” Malcolm McGruder, brother of the Sigma Alpha Epsilon fraternity in Valencia, told KTNV.