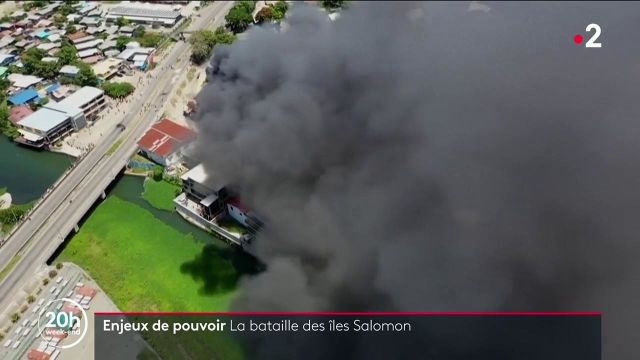 A concentration of issues is playing out in the Asia-Pacific zone, around a small archipelago: the Solomon Islands. Behind the riots that shake the capital, there are major political players like China, Taiwan, Australia and the United States.

It is a battle of the Pacific that does not speak its name. It is played around a small State, the Solomon Islands, against a background of social unrest, which has set the archipelago on fire for a few days. The archipelago is at the heart of a struggle for influence between the great powers of the region: Australia, Taiwan and China. In addition to the Prime Minister’s residence and public buildings, a district of Honiara, the capital, was particularly targeted by rioters.

In a district ofHoniara, where the flourishing Chinese businesses are located, three people were killed and several stores were ransacked. “China is closely following the current developments in the Solomon Islands and condemns the violence”, said Zhao Lijian, the spokesperson for the Chinese Foreign Ministry. If the rioters attack the Chinese community, it is in particular because two years ago, the Prime Minister of the Solomons made a historic decision: turn its back on Taiwan to promote its relations with China.

1 thought on “Pacific: the Solomon Islands at the heart of geopolitical issues – Franceinfo”