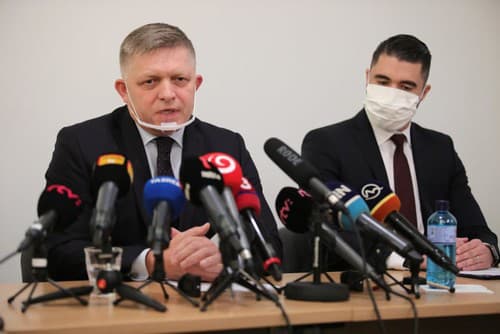 “We claim that there has been a violation of the criminal law, the commission of the crime of abuse of power of a public official, the obstruction of justice, the crime of bending the law,” said Fico. According to him, the aim of the whole case was to make records that would be used in criminal proceedings, or to obtain evidence for the political discrediting of people who in the past cooperated with Smer-SD at various levels.

VIDEO Many things are unanswered, says Fico: Criminal proceedings are commonly manipulated in the fight against the opposition

By moving the recordings to the media, there was a gross violation of the law

He underlined that the transfer of recordings to the media led to a gross violation of the law. Even if they were legal, according to Fico, there is nothing about them that could lead to criminal liability of the actors. He thinks that the current situation in Slovakia should be addressed by the European Commission. He reminded that Smer-SD recently approached her with a submission and will supplement it.

He described the current situation in Slovakia as the era of darkness, when investigations and statements of penitents were manipulated. He thinks that after its completion, the criminal liability of several currently accused persons will not be assessed, but a group of “politically engaged” investigators, especially from the National Criminal Agency (NAKA), the Prosecutor’s Office of the Special Prosecutor’s Office and a group of judges who may have committed .

Lawyers Gašpar and Para ask how to protect their clients when their confidential meetings are recorded and their defensive tactics are revealed. According to Gašpar, the powers of a public official were most likely abused. He talks about purposeful action.

Para will also turn to the European institutions

He also called Para’s abuse of the right to settle accounts or political struggles as inadmissible. He will also turn to the European institutions. He announced that he would face the proceedings before the Slovak Bar Association (SAK), which he initiated, and he believes that the chamber will take a strong position.

1 thought on “Criminal law violated in deer case: VIDEO The responsibility of OČTK needs to be checked, Fico, Para and Gašpar agree – Topky.sk”