In Burkina Faso, thousands of demonstrators march to protest against security bankruptcy – archyworldys 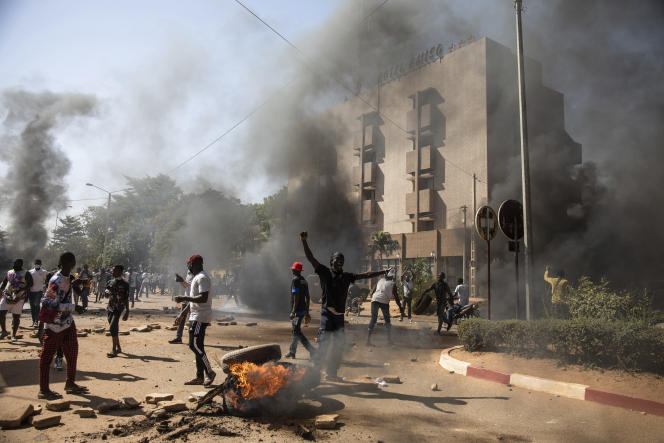 The slogans turned into cries of anger. “Roch clears”, “Free Kosyam”, ” Enough is enough ! “, chanted the demonstrators, gathered this Saturday, November 27 in the heart of the Burkinabe capital, to demand the departure of President Roch Marc Christian Kaboré, “Incapable”, they believe, to stem the cycle of jihadist violence in Burkina Faso, which has killed more than 2,000 in six years.

“Since Roch has been in power, we have only been counting the dead, which he has released! “, castigates Djibril Kabré, 39, facing a cordon of CRS. “We are waiting for concrete actions, we are tired of promises”, underlines Marcel Tankoano, the president of the Popular Movement Save Burkina Faso, member of the Coalition of November 27 (C27) which launched the call for mobilization today.

Shortly after 8 a.m., the demonstrations quickly degenerated between the police who fired tear gas at the few hundred demonstrators wanting to join the Revolution Square, in the city center crisscrossed by an important security device. Groups of young people set tires on fire and fired projectiles against riot units. Others vandalized part of the civil status department, after trying to burn down the Ouagadougou town hall building.

At least twenty people were injured, four of them seriously, according to a humanitarian source. Among the victims, two Burkinabé journalists and a child under ten years old affected by tear gas fire. On Friday and Saturday, the authorities ordered the closure of all schools in the country “To preserve security” students and teachers. Other demonstrations of anger took place in several cities of the country, in particular in Dori and Kaya (north), particularly affected by the violence of terrorist groups.

On Wednesday, the town hall of Ouagadougou had asked, in a letter addressed to the security forces, what they take “All provisions” to prevent the holding of any “Illegal demonstration”. The November 27 coalition (C27), bringing together three civil society organizations, nevertheless maintained its call for “To march peacefully” in “Support to the security forces” and against “The security management of the authorities”. “The young people were attacked, they only retaliated”, retorts Marcel Tankoano, member of the coalition, who already promises “Other marches in the days to come”.

“The attack too many”

The popular rumble has not fallen for two weeks in Burkina Faso, since worst attack ever against the army on November 14. At least 57 people, including 53 gendarmes, were killed in Inata, in the north of the country. The leak of an internal document, addressed to the military hierarchy two days before the assault, alerting to a “Total disruption of food supply”, particularly shocked. “The attack too many, Ishmael believes, a 34-year-old administrator, how can we explain that our soldiers are starving in battle? This is unacceptable ! “

The head of state’s speech on Thursday night failed to calm the anger. On national television, Roch Marc Christian Kaboré promised in particular a cabinet reshuffle and to put an end to “Malfunctions” within the army. “I will watch scrupulously, more than in the past, on the issues of logistics, bonuses and operational capacity building of our fighting forces”, he promised, his face serious, announcing “Disciplinary consequences” to come following Inata’s drama. “He was firm, but it’s too late! We’ve been suffering for six years ”, retorts Ishmael, in the crowd, waving a small black and red flag, the colors of his country.

Slogans against the French presence in the Sahel were also heard this Saturday in the capital, where a Total gas station was vandalized by protesters. A French military convoy was stranded in the country for more than a week by protesters. Several Western chancelleries have advised their nationals to stock up and not to leave their homes on Saturday. The French Embassy in Burkina Faso recommends “Precautionary confinement until further notice”.

Read also Article reserved for our subscribers In Burkina Faso, the French army faces the anger of the inhabitants

The government’s decision to extend the suspension of mobile internet access, which constitutes 70% of national traffic, “For a period of 96 hours”, i.e. eight days of cut-off, ” For safety reasons “, added to the frustrations of the populations in this poor Sahelian country, where the economic impact of this measure is estimated at 20 billion CFA francs by the NetBlocks index. “We have never seen that in Burkina Faso, we are prevented from informing ourselves and from working! “, castigates a protester, who makes a living from online sales.

In a statement released on Friday, the political opposition denounced “Liberticidal measures”. In Burkina Faso, where 1.4 million displaced people had to flee their homes because of the violence, the authorities appear increasingly weakened. Opposition leader Eddie Komboïgo in turn threatens to organize demonstrations to demand ” resignation ” of the president, if “Convincing measures” are not taken by December 9.

In Burkina Faso, the security crisis threatens to turn into a political crisis. “You have seen in Mali, when the population is angry, the president cannot hold out for long! “, worries Nathanaël, a Ouagalais, watching the demonstrators parade near the town hall.

Czech singer dies of Covid-19 after voluntarily contracting the virus

Slovak handball players met two goals out of three, Kukučka: Bratislava was in our power – Športky.sk

One thought on “In Burkina Faso, thousands of demonstrators march to protest against security bankruptcy – archyworldys”