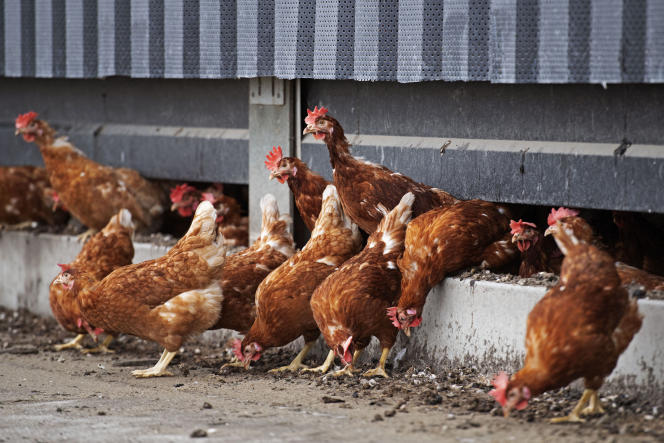 An outbreak of avian influenza in breeding was highlighted in a poultry farm in the North, we learned on Saturday, November 27. This is the first since the epizootic last winter, when free-range poultry are once again confined since early November.

“While avian influenza viruses are actively circulating in Europe through migratory birds, France detected on November 26 an outbreak due to a highly pathogenic strain in a laying hen farm located in the town of Warhem, in the Nord department “, said the Ministry of Agriculture in a press release. This is the H5N1 virus, specifies the minister’s office questioned by Agence France-Presse. The suspicion of infection follows a finding of abnormal mortalities among poultry on the farm.

France thus loses its “free” status from avian influenza, stressed the Ministry of Agriculture, which may have consequences on the export outlets for its poultry. “Steps have been taken via the embassies to reassure the main importing countries of the sporadic nature at this stage of this event and the implementation of the usual management measures as provided for by European Union regulations”, added the cabinet of the Minister of Agriculture, Julien Denormandie.

Read also: Article reserved for our subscribers “In the countryside, anger is mounting”: in the Landes, farmers faced with the bird flu epizootic

France had already declared since the end of the summer four cases of avian influenza in wildlife and three cases in backyards on the metropolitan territory. In Europe, 26 countries are currently affected by influenza viruses, which concerns more than 400 outbreaks in breeding and 600 cases in wildlife, specifies the ministry.

Sanitary measures have been taken. The hens will be slaughtered and the home will be disinfected. A protection zone (3 kilometers around the outbreak) and a surveillance zone (10 kilometers) have been set up by the prefect. To avoid the risk of spreading the virus, the movement of poultry is prohibited in these areas where strict sanitary measures must be observed.

A prefectural decree “Suspending the hunting of waterfowl and feathers” up to ” new order “ in the territories of the communes located within a radius of 10 kilometers around the breeding was also taken. “The consumption of meat, foie gras and eggs – and more generally any poultry-based food product – presents no risk to humans “, however specified the ministry.

Read also: Article reserved for our subscribers In 2020, with bird flu, the foie gras industry was not at the party

The level of risk relating to avian influenza has increased to ” raised “ in a city, according to a decree published on November 5 in the Official newspaper. The government hopes to prevent the episode of winter 2020 from repeating itself, when bird flu quickly spread to farms in the South-West after the passage of migratory birds carrying the virus.

Painful and sorry. Goggio spoke after the fall, will she make it to the Olympics? – PRAVDA.sk