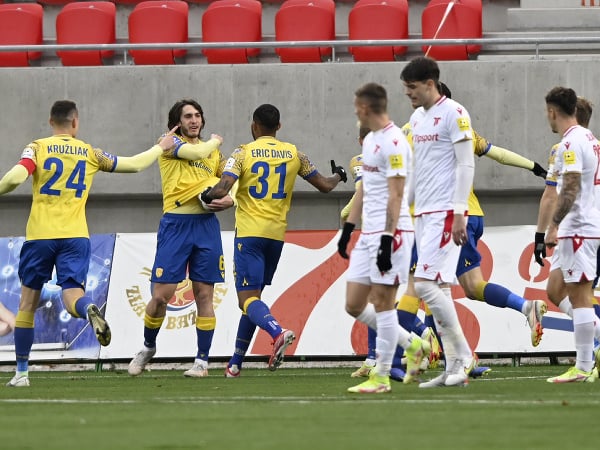 TRENČÍN – DAC Dunajská Streda footballers won Saturday’s match of the 16th round of the Fortuna League on the Trenčín lawn 1: 0. Andrija Balič took care of the only goal of the duel in the 3rd minute.

The people of Trenčín were unable to rehabilitate for a three-goal loss on Ružomberok and complicated the situation in the fight for the top six. The decisive moment of the duel came already in the 3th minute, when Andrija Balič used Veselovského center to the penalty area. The home team tried to answer quickly, but in the 12th minute the goalkeeper Jedlička managed with Hollé. The Trenčians tried to play actively, but the players from Žitný ostrov defended well and did not allow the opponent to prepare a good chance during the break.

After the change of sides, Hollý was closest to the equalizer again, but Jedlička covered his shot from a distance in the 69th minute. The guests were threatened by counterattacks, the most dangerous of which was badly solved by Andzouan in the 78th minute. The DAC guarded the end and the Trenčians scored their third loss from the last four duels.

The MFK Liptovský Mikuláš footballers lost in the 16th round of the Fortuna League with MFK Michalovce 0: 1. In the cold weather in Poprad, the table neighbors from Liptovský Mikuláš and Michalovce faced each other in a six-point match. The first half did not bring many chances. In the 14th minute, the guests threatened a corner kick, but Sváček hit well on the goal line. The Liptovs sent the first shot between the three poles of Michalovce at the end of the 37th minute. A minute later, the home team did not understand during the pass from their own goal, Begala fired the ball from the first, but it missed Sváček’s sanctuary.

In the second half, the home team were more active, pushing themselves into the 16th Michalovce with frequent assault attacks. However, the centered balls did not find their addressee for a long time. With 57 minutes played, Liptáci nearly put the visitors another one up as he broke through in the middle and fired from just outside the box, but his shot passed just over the bar. Later, Gerát got a good opportunity after Captain Bartoš’s pass, but his cross shot only stamped the construction of the visiting goal. In the 83rd minute, the guests were reminded. After Žofčák’s center, Marcina’s ball ended up in the net, but the goal did not pay for the offside. The guests finally scored a goal at the very end after a corner kick, when Trusa pushed through his head.

Pohronie did not find a recipe for Zlatá Moravka at home

FK Pohronie footballers lost in the 16th round of the Fortuna League with FC ViOn Zlaté Moravce 0: 2. In Žiar nad Hronom, the duel of the last team was played with the penultimate one in the persistent light rain. The home team had better home, in the second minute Ladji checked the attention of the goalkeeper Kiru from behind the sixteenth and in the fifth after the center of Záhumenský Lačný headed next to the post. Pohronia footballers were more active, but they did not get into chances. Gradually, the guests started to dare, they started to have more ball on their feet and they threatened especially from the right side of Mondekom. This player had a chance to change things around in 27 minutes into the match, but the ball went wide. In two minutes, Mondek made a nice penetration, after which Švec threw a goal from the top of the 16th goal, but also the goal. The goal moment finally came a minute before half time. The most initiating football player ViOn-u Mondek sent a good shot from inside the big lime, Hrdlička kicked the ball, he neutralized Šveca’s subsequent shot with his feet, but he was no longer entitled to the third end from Kyziridis’s football – 0: 1.

In the second half, Pohronie tried to equalize, but for a long time she could not work out a clear chance. The several Moravians defended several dangerous balls in the 16th Republic and threatened from quick contours. The score could be changed only in the 66th minute, the substitute Ściślak finished from twelve meters, only Menicha hit, who saved Kira from the intervention or goal. The mentioned home player had an even better chance two minutes later. He shot from the inside of the penalty area, overcame the goalkeeper, but was replaced by Captain Čögley, who headed the ball. On the other hand, Mondek could have added a second goal from the counter, aiming right from the right side right next to the post. It stopped raining in Žiar and with the increasing end of the match the pressure of Pohronia increased, Ściślak was especially pleased, but his third shot was blocked again by the opponent, later from Záhumenský overcame the goal and Badolo hit the crossbar from the left side of the big lime. And so the familiar rule was not given – you will get. ViOn’s break came out, Ďubek pulled out Kyziridis, who was not in the face of Hrdliček in the 86th minute – 0: 2. The referee set another seven minutes, but the drama no longer took place.