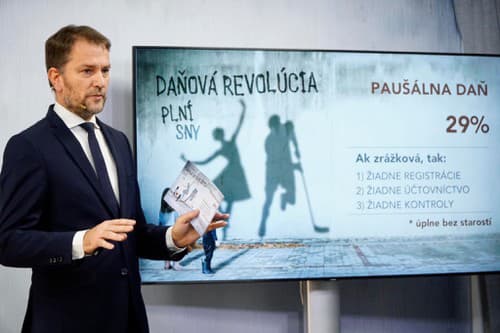 Matovič has a great opinion of his plan, he is said to have improved Sulík’s dream

Matovič spoke flowily about his reform in Diary of N, where, among other things, he stated that Sulík should be even more than satisfied with his plans in the tax revolution. “As I know Risha, I think he’s de facto seeing himself in that revolution, because many of his dreams of the levy bonus he’d dreamed of for years have come true.” Matovic said without hearing Sulík’s definitive words about reform.

“Although not exactly what he wanted to do, they are fulfilled. It is an extraordinary simplification of the system, a clean-up of exceptions, etc. When it is over, I think he can support the whole reform en bloc,” Matovic believes. He does not know what Sulík will say about the reform in the end, but he believes in a positive answer. “I firmly hope it’s not silence before the storm, but rather tacit consent.” says leader OĽaNO.

I did it even better than he does, he continues to praise the Matovic revolution

He did not stop praising his own reform and continued. “I did, I’d say, got a few levels higher by simplifying it even more than Richard wanted. His calculation was based on a super-gross wage, which is the de facto price of labor, so I’m not trying to change the nomenclature. people are used to the price of labor, let’s leave it as the price of labor, “ Matovič answered the question of whether he was inspired by Sulík’s contribution bonus.

I come here with that ass and then Igorko comes with a hammer, Sulík said

However, a short reaction to Matovič’s big words really came, directly from Sulík, who cooled him down in a few sentences. “I feel like a watchmaker who, with a magnifying glass, a thin screwdriver and pliers in his hands, has created a gem of fine mechanics and Igorko comes in close to putting on the cover with a hammer and a hundred nails in his hand and pushes me away with the words ‘let me improve,'” Sulík responds to statements that Matovič allegedly improved his dream of a tax credit.

“Seriously now: the levy bonus does not include a tradesman’s plunder, a millionaire’s tax, or an increase in dividend tax, or EUR 100 per child by doing nothing, or the abolition of the ceiling for the payment of levies,” Sulík listed the differences between his and Matovič’s plan in the tax revolution.

We had a hard time agreeing with 150 euros, Matovič won 500 and without an agreement

In addition, under the reaction status, there was an immediate debate about who is responsible for Matovič and Kollár’s latest idea to contribute to people over 60 with a 500-euro coupon after vaccination. Sulík revealed practically everything behind this plan. At first it was supposed to be 150 euros, later unexpectedly and in the press of Matovič and Kollár it increased to 500 euros.

1 thought on “Is he preparing for a big duel eg? Race for better reform, Igorko is like a spoiler with a hammer, says Sulík – Topky.sk”