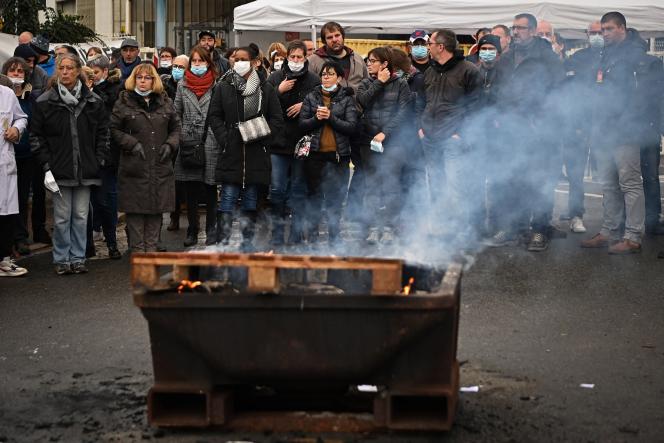 The 350 employees of the Aveyron company of metallurgy (SAM), in Aveyron, no longer had many hopes. The Toulouse commercial court finally sealed, Friday, November 26, the judicial liquidation and the immediate cessation of activity of this automotive supplier.

“Having taken note of Renault’s position”, who refused to support the only takeover project, the court “Puts an end (…) to the continued activity authorized until December 10, 2021, in the context of judicial liquidation”, he wrote in his judgment.

The occupation of the factory continues

Taken over in 2017 by the Chinese group Jinjiang, SAM, based in Viviez on the heights of Decazeville, had been placed in receivership on December 10, 2019, then in liquidation on September 16, with an extension of activity until 10 December.

For the commercial court, “It will suit” of “Proceed with redundancies as planned” in the Commercial Code, “As well as the planned liquidation operations” for this type of situation. The sole contractor for SAM, Renault sounded the death knell for the hopes of employees by refusing, on Tuesday, to support the only project to take over its Aveyron subcontractor by one of its former bosses, believing that it “Did not present the necessary conditions of sustainability and security”. This recovery plan was financially supported by the State and the Occitanie region.

The factory workers, however, do not give up. “The general assembly has just decided unanimously to continue the occupation of the factory, not to respect the totally illegal court decision. They are determined and they will not let go ”, said David Gistau, departmental manager of the CGT.

Strong impact on the local economy

The regional councilor (Communist Party) of Occitanie Pascal Mazet, elected with the majority of the president (Socialist Party) of the region, Carole Delga, immediately expressed his ” anger “, of his “Indignation” and his ” disgust “, judging the state “Unable to reindustrialize” France. The Commercial Court “Could have left a little more time, until March 2022, to find a buyer”, did he declare.

Arnaud Viala, president (The Republicans) of the departmental council of Aveyron, for his part expressed his ” anger “. “It is a great disarray, a great sadness for the employees who mobilized and for the Decazevillois basin. I’m not surprised. I am very angry with all the parameters that led to this decision ”, did he declare.

The CGT of the SAM, which refused to comment before a press conference scheduled for Friday at 2 p.m., said Thursday that a decision to close the site “Would be illegal” and that she had appealed to the prosecution on this matter.

Thursday evening, a demonstration in support of SAM employees brought together 1,200 people in Viviez, according to the prefecture, 3,000 according to the unions. For the leader of the CGT, Philippe Martinez, present at the event, Renault seeks to “Make believe that we are dealing with subcontractors while we continue to outsource”. In the former mining area of ​​Decazeville, it is consternation. The loss of 350 jobs will have a strong impact on the local economy, officials fear.

PHOTO Tragic accident in the east: A 14-year-old pedestrian lost his life after a collision with a car – Topky.sk