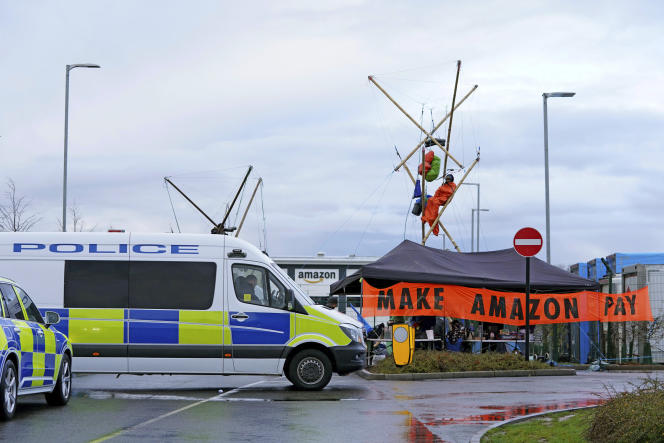 Activists of the environmental movement Extinction Rebellion (XR) organized Friday, November 26 blockades of distribution centers of the giant Amazon, in the United Kingdom, in Germany and in the Netherlands, to protest against the“Obsession with overconsumption”, symbolized according to them by the commercial operation “Black Friday”. The thirteen British sites targeted early in the morning by the organization represent, according to her, more than half of the deliveries of the American group in the country.

At the Scottish center of Dunfermline, around 20 activists were preventing vehicles from entering and some from leaving, the Press Association news agency reported. “This action aims to expose Amazon’s crimes, while also being an example of a larger economic system designed to push us to buy things we don’t need at a price we can’t afford.”, Extinction Rebellion (XR) explained in a statement.

For XR, known for its spectacular blocking actions in recent years, “Black Friday” symbolizes “An obsession for overconsumption, which is not compatible with a livable planet”.

Contacted by Agence France-Presse, Amazon explained that it was working to use its network in such a way as to minimize the consequences for its customers. “We take our responsibilities seriously, this includes our commitment to achieve carbon neutrality by 2040”, insisted a spokesperson for the group often criticized for its social and fiscal practices. He assured to provide “A safe and modern working environment” and support “Tens of thousands of small businesses that sell” on its platform.

Amazon, which launched its promotional campaign on Thursday, is concentrating most of the attacks on promotional offers offered by many merchants on Friday, kicking off the Christmas shopping season. Make Amazon Pay, an international coalition of forty organizations, including Greenpeace and Oxfam, accuses the Seattle group of placing profits before the well-being of its employees and supports employees wishing to demonstrate against their working conditions or go on strike on Friday.